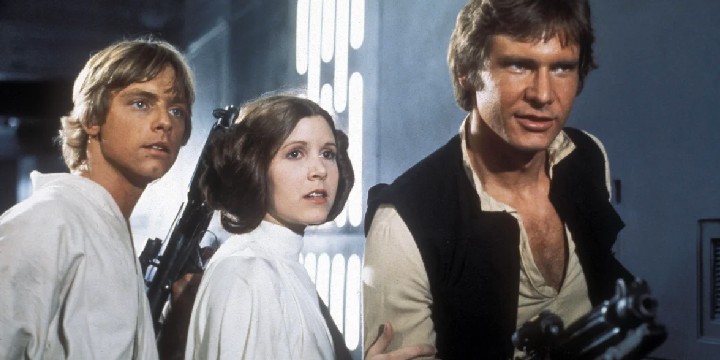 We’ve collected these Han Solo quotes to help you muster the motivation needed to push through life’s setbacks and hardships!

Being reckless and living life the way we want is undoubtedly one of the most thrilling ways to live.

Known to be an arrogant and dismissive human being, Han Solo lived like this—constantly running away from life’s repercussions.

Despite all this, his love for those dear to him pushed him to be accountable for his actions.

It may be hard to improve our habits, but that’s what friends are for! They exist to help us get back on track and support us continuously.

Indeed, having a meaningful bond with somebody is a reason enough to see things through.

Remember that the moment we decide to change for the better is already a huge step toward success.

So, don’t miss out on this collection of Han Solo’s most memorable and meaningful quotes!

And make sure to read these Star Wars quotes and Yoda quotes.

2. “Your mother’s gone. But what she stood for, what she fought for—that’s not gone.”

3. “Kid, I’ve flown from one side of this galaxy to the other; I’ve seen a lot of strange stuff. But I’ve never seen anything to make me believe that there’s one all-powerful Force controlling everything. There’s no mystical energy field that controls my destiny. Anyway, it’s all a lot of simple tricks and nonsense.”

4. “Hokey religions and ancient weapons are no match for a good blaster at your side, kid.”

5. “Listen, big deal. You got another problem. Women always figure out the truth. Always.”

6. “I used to wonder about that myself. Thought it was a bunch of mumbo-jumbo. A magical power holding together good and evil, the dark side and the light? Crazy thing is, it’s true. The Force, the Jedi—all of it. It’s all true.”

7. “Look, good against remotes is one thing. Good against the living, that’s something else.”

9. C-3PO: “Sir, the possibility of successfully navigating an asteroid field is approximately 3,720 to 1.”

11. “Wonderful girl. Either I’m going to kill her, or I’m beginning to like her.”

14. “What good is a reward if you ain’t around to use it? Besides, attacking that battle station is not my idea of courage. It’s more like suicide.”

15. “Look, Your Worshipfulness, let’s get one thing straight. I take orders from just one person: me.”

16. “You like me because I’m a scoundrel. there aren’t enough scoundrels in your life.”

18. “Watch the wisecracks, kid, or you’re gonna find yourself floating home! I’m nobody’s straight-man, not on my own ship!”

20. “Sorry, sweetheart. I haven’t got time for anything else.”

22. “That’s a good story. I think you just can’t bear to let a gorgeous guy like me out of your sight.”

23. “You said you wanted to be around when I made a mistake. Well, this could be it, sweetheart.

24. “Well, Princess, it looks like you managed to keep me here a while longer.”

26. “Afraid I was gonna leave without giving you a goodbye kiss?”

29. “You’re gonna need a nickname, ’cause I ain’t saying that every time.”

30. “Hey, hey! Listen to me, Chewie! Chewie, this won’t help me! Hey! Save your strength. There’ll be another time. The Princess—you have to take care of her. You hear me? Huh?”

32. “Me have plan of break out. You and I freedom make—by secret battle of pretend.”

33. “That’s ’cause droids don’t pull people’s arms out of their sockets when they lose. Wookiees are known to do that.”

Hilarious Han Solo Quotes That Will Make You Chuckle

44. “Marching into a detention area is not what I had in mind.”

45. “I think my eyes are getting better. Instead of a big dark blur, I see a big light blur.”

47. “If we can just avoid any more female advice, we ought to be able to get out of here.”

Han Solo Quotes for the Jedi in You

49. “Traveling through hyperspace ain’t like dusting crops, farm boy. Without precise calculations, we could fly right through a star or bounce too close to a supernova, and that’d end your trip real quick, wouldn’t it?”

50. “Watch your mouth, kid, or you’re going to find yourself floating home. We’ll be safe enough once we make the jump to hyperspace. Besides, I know a few maneuvers. We’ll lose them!”

Han Solo Quotes to Have a Better Understanding of His Personality

53. “Bring them on! I prefer a straight fit to all this sneakin’ around!”

54. “You tell him that Han Solo just stole back the Millennium Falcon for good.”

56. “You happen to notice that freighter down there? You know what’s on it? About 30 hired guns. All I gotta do is give them the signal; you’re surrounded.”

58. “She’ll make point five beyond the speed of light. She may not look like much, but she’s got it where it counts, kid. I’ve added some special modifications myself.”

59. “It’s the ship that made the Kessel Run in less than twelve parsecs! I’ve outrun Imperial starships, not the local bulk-cruisers, mind you. I’m talking about the big Corellian ships now. She’s fast enough for you, old man.”

60. “Drop the landing gear! When I tell you, flood the intake and sweep to the bilats. A little something I picked up from my pal, Needles, best street racer in all of Corellia—till he crashed and died doing this!”

Han Solo: “Yeah, great at getting us into trouble.”

Luke Skywalker: “Why didn’t you say so before?”

63. Han Solo: “How ya feeling kid? You don’t look so bad to me. You look strong enough to pull the ears off a Gundark.”

Luke Skywalker: “Thanks to you.”

Han Solo: “Yeah, no thanks to you. I should have Chewie rip your arms off. In fact, Chewie, do it.”

Han Solo: “Is there a garbage chute or trash compactor?”

Han Solo: “Same thing I always do. Talk my way out of it.”

70. Han Solo: “Maz is a bit of an acquired taste, so let me do the talking. And whatever you do, don’t stare.”

Did These Han Solo Quotes Make Your Mind Travel to a Whole New World?

It is hard to change and be better when our past mistakes continuously hold us prisoners. We may not do the right thing all the time and lose hope for the future, but it’s still important to keep in mind that only we have the power to change the course of our lives.

We can learn a thing or two from Han Solo’s experiences in Star Wars. Before joining the Rebel Alliance, he was only motivated to do good deeds when promised a good paycheck. And yet, he still managed to find his purpose and become a hero when he assisted the rebels who are fighting for a better galaxy.

This only proves that it’s never too late for us to improve the quality of our lives and change for the better. Through courage, hope, and friendship, we can all be like Han Solo, who turned his life around. We hope that these quotes were able to ease your hardships and make you believe in the opportunity tomorrow might bring.

Which Han Solo quote is your favorite? Do you have other favorite characters from Star Wars? Comment below!