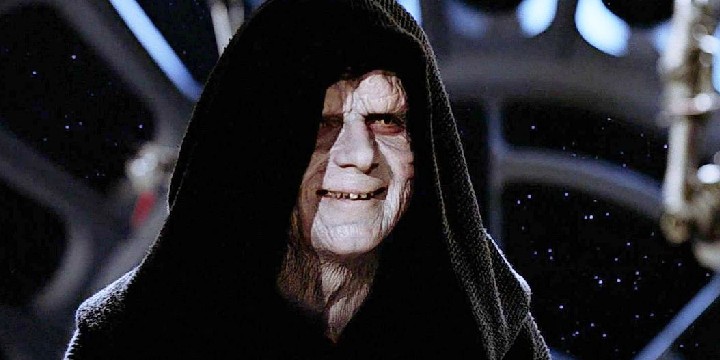 These Palpatine quotes will make you see the world through the eyes of a strong and ruthless ruler!

Palpatine, also known as Darth Sidious, is one of the most remarkable antagonists of the Star Wars franchise.

He’s a power-hungry politician who disguised himself as an honest and virtuous servant to fulfill his dark plan.

One of his ambitious plans was to transform the Republic into an Empire to assert more power. He may have succeeded and ruled for a long time, but his regime was put to an end.

The destruction of his empire and his evil deeds only brought havoc to the lives of his people and allowed for more instances of struggle.

Palpatine is a fictitious character, but we should not fail to see the important lessons that he conveyed.

So, to help you better understand him, we’ve gathered these quotes that’ll give you lessons about power, trust, and ambition.

And make sure to read these Star Wars quotes and Qui-Gon Jinn quotes.

1. “Remember back to your early teachings. All who gain power are afraid to lose it.”

2. “We are all of us, always being tested, my friend. Tests make us stronger, and strength is power, and power is the point. We must pass all the tests we face or die in the effort.”

4. “I only meant that I want to live an extraordinary life.”

5. “He became so powerful, the only thing he was afraid of was losing his power, which, eventually, of course, he did. Unfortunately, he taught his apprentice everything he knew. Then his apprentice killed him in his sleep. It’s ironic. He could save others from death, but not with himself.”

6. “The fear of losing power is a weakness of both the Jedi and the Sith.”

8. “In time, you will learn to trust your feelings. Then, you will be invincible.”

9. “The attempt on my life has left me scarred and deformed. But I assure you, my resolve has never been stronger.”

10. “Once more the Sith will rule the galaxy and we shall have peace.”

12. “Only through me can you achieve a power greater than any Jedi.”

13. “He has grown strong, only together can we turn him to the dark side of the Force.”

14. “I have been every voice you have ever heard inside your head.”

15. “I’m not afraid of you. You wouldn’t dare harm the Supreme Chancellor of the Republic. Whatever would your master say?”

16. “There is only one plan—one great design which shall govern the universe—mine.”

17. “Everything that has transpired has done so according to my design.”

18. “Everything is proceeding as I have foreseen.”

19. “To cheat death is a power only one has achieved, but if we work together, I know we can discover the secret.”

20. “The most dangerous men are always orphans.”

21. “It is possible that the war itself has been only one further move in some greater game.”

22. “There is a great disturbance in the Force.”

24. “You must reserve your rage for times when you can profit from it.”

25. “And as my first act with this new authority, I will create a grand army of the Republic to counter the increasing threats of the Separatists.”

26. “Oh, no, my young Jedi. You will find that it is you who are mistaken about a great many things.”

27. “Long have I waited and now your coming together is your undoing.”

28. “The dark side of the Force is a pathway to many abilities some consider to be unnatural.”

29. “You want this, don’t you? The hate is swelling in you now. Take your Jedi weapon. Use it. I am unarmed. Strike me down with it! Give in to your anger! With each passing moment, you make yourself more my servant.”

30. “Good. Use your aggressive feelings, boy. Let the hate flow through you. Good! Your hate has made you powerful. Now, fulfill your destiny and take your father’s place at my side.”

31. “The ritual begins. She will strike me down—and pledge herself as a Sith. She will draw her weapon. She will come to me. She will take her revenge. And with a stroke of her saber—the Sith are reborn! The Jedi are dead! Do it! Make the sacrifice!”

32. “Let your death be the final word in the story of rebellion.”

33. “Stand together, die together. The lifeforce of your bond—a dyad in the Force. A power like life itself. Unseen for generations. And now—the power of two restores the one, true Emperor.”

34. “If you will not be turned, you will be destroyed. Young fool. Only now, in the end, do you understand. Your feeble skills are no match for the power of the dark side. You have paid the price for your lack of vision. Now young skywalker, you will die.”

35. “You’re one man against a galaxy full of scoundrels.”

Palpatine Quotes That Will Give You Goosebumps

38. “It is possible that the war itself has been only one further move in some greater game.”

40. “Those who do not serve my ends, no matter how powerful they are, will be eliminated.”

41. “Now, you will experience my full potency. I live as energy. I am the dark side!”

43. “Now witness the power of this fully armed and operational battle station. Fire at will, commander.”

45. “Your arrogance blinds you, Master Yoda. Now you will experience the full power of the dark side.”

Palpatine Quotes for a Better Understanding of Betrayal

46. “I would hate to think you are training your own Sith apprentice to destroy me.”

47. “The Jedi Council wants control of the Republic. They’re planning to betray me.”

48. “The Jedi apprentice still lives. Perhaps you have betrayed me. Do not make me turn my fleet against you.”

Great Palpatine Quotes That Zoom in Power and Control

49. “Your Majesty, if I am elected, I promise to put an end to corruption.”

50. “I love democracy—I love the Republic. The power you give me I will lay down when this crisis has abated. And as my first act with this new authority, I will create a Grand Army of the Republic to counter the increasing threats of the Separatists.”

51. “I will not go down in history as the last Chancellor of the Republic.”

52. “Soon I will have a new apprentice, one far younger, and more powerful.”

54. “And if I ever need your services again, I will not hesitate to clone you.”

55. “Nothing is truly indestructible, doctor.”

56. “From here you will witness the final destruction of the Alliance and the end of your insignificant rebellion.”

57. “I have waited a long time for this moment, my little green friend. At last, the Jedi are no more.”

Insightful Palpatine Quotes to Remind You of His Wisdom and Intelligence

59. “Beings believe what you tell them. They never check, they never ask, they never think. Tell them the state is menaced by quadrillions of battle droids and they will not count. Tell them you can save them and they will never ask—from what, from whom? Just say tyranny, oppression, vague bogeymen that require no analysis. Never specify. Then they look the other way when reality is right in front of them. It’s a conjuring trick. The key is distraction, getting them to watch your other hand. Only single-minded beings don’t join in the shared illusion and keep watching you too closely. Single-minded beings are dangerous. And they either work for me, or they don’t work at all.”

60. “Anakin, if one is to understand the great mystery, one must study all its aspects, not just the dogmatic, narrow view of the Jedi. If you wish to become a complete and wise leader, you must embrace a larger view of the Force.”

Will You Betray a Friend in Exchange for an Opportunity to Fulfill Your Biggest Ambition?

We all have ambitions in life, some greater than the others. This goal gives us the drive to work harder and smarter to achieve it. But, let us make sure that our means do not involve backstabbing someone in the back like Palpatine.

Palpatine was a reputable politician who dreamed of making a strong empire. He rose to power through deceit and betrayal and ruled for years. However, remember that dark will never triumph over light; eventually, the light side of the Force ended his regime as it only yielded destruction and abuse of power.

He may have been defeated, but the underlying messages we can learn from his prime to his downfall should not perish along with him. Instead, let it serve as a reminder not to allow our ambitions to blind us and tempt us to harm others. Remember that our abilities, talents, and strong points should only be used to achieve something positive.

Do you agree that Palpatine is the best villain in the Star Wars franchise? Did we miss any other good quotes from him? Please, share your thoughts below!