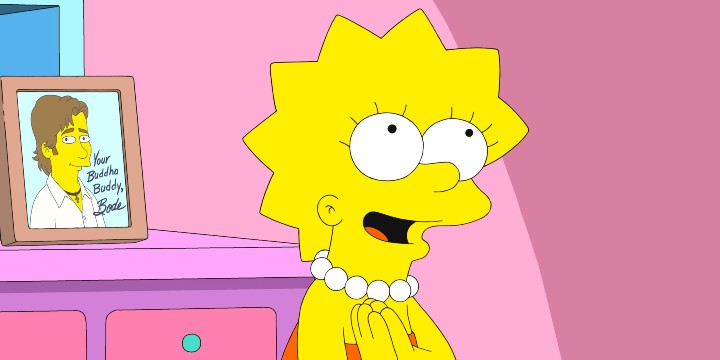 Dive deep into these Lisa Simpson quotes highlighting her wisdom that can inspire people of all ages!

Lisa Simpson is the second child of Homer and Marge Simpson from our favorite TV show, The Simpsons. She is a well-known feminist and a young girl with wisdom beyond her years. When you hear her speak, you’ll be awe-inspired by how much knowledge she already has at such a young age.

But, aside from having the smarts, Lisa has proven herself to be a genius who isn’t afraid to try new things. This inspired many people to believe that they, too, could achieve greatness at any age if they worked hard enough.

Her quotes below are some of the best from all seasons of The Simpsons. Make sure you read through to the end to find out what valuable lessons you can learn from our young feminist!

And don’t forget to check out these The Simpsons quotes and Homer Simpson quotes.

1. “Does it make you feel superior to tear down people’s dreams?”

2. “Mom, look, I found something more fun than complaining!”

3. “Prayer. The last refuge of a scoundrel.”

7. “Bart, the only reason to apologize is if you look deep down inside yourself and you find a spot, something you wish wasn’t there, because you feel bad you hurt your sister’s feelings.”

8. “Don’t you see? Getting what you want all the time will ultimately leave you unfulfilled and joyless.”

9. “I tried the coat hanger again. I don’t understand why we can only try ideas once.”

10. “If you take away our cartoons, we’ll grow up without a sense of humor and be robots.”

11. “Pablo Neruda said, ‘Laughter is the language of the soul.’”

14. “All the years I’ve wanted to be treated like an adult have blown up in my face.”

15. “You mean those leagues where parents push their kids into a vicious competition to compensate for their own failed dreams of glory?”

16. “I’m proud of you, Mom. You’re like Christopher Columbus. You discovered something millions of people knew about before you.”

17. “There’s a lot more to it than that, Bart. I don’t just babysit. I sell peace of mind for a dollar an hour. Two dollars after 9 o’clock.”

18. “It’s not my nature to complain, but so far today we’ve had three movies, two film strips, and an hour and a half of magazine time. I just don’t feel challenged.”

19. “I think you need Skinner, Bart. Everybody needs a nemesis.”

20. “This is ridiculous. Only babies and ex-junkies are afraid of needles. Stick me, Chuckles.”

21. “It’s amazing how I can feel sorry for you and hate you at the same time. I’m sure there’s a German word for it.”

22. “Why do I get the feeling that someday I’ll be describing this to a psychiatrist?”

23. “We’re simple people with simple values. Capitol City is too big, too complex. Everyone in Springfield knows us. And has forgiven us.”

Lisa Simpson Quotes to Motivate You

24. “Okay, I’m not going to give up. Solitude never hurt anyone. Emily Dickinson lived alone, and she wrote some of the most beautiful poetry the world has ever known.”

25. “Bart, having never received any words of encouragement myself, I’m not sure how they’re supposed to sound, but here goes: I believe in you.”

26. “Well, I’m going to be a famous jazz musician. I’ve got it all figured out. I’ll be unappreciated in my own country, but my gutsy blues stylings will electrify the French. I’ll avoid the horrors of drug abuse, but I do plan to have several torrid love affairs, and I may or may not die young. I haven’t decided.”

29. “Why is it when a woman is confident and powerful, they call her a witch?”

30. “This goes against every feminist bone in my body, but dad, can’t you control your woman?”

31. “Look, Dad! I made a modern studio apartment for my Malibu Stacey doll. This is the kitchen, this is where she prints her weekly feminist newsletter—Dad! You’re not listening to me!”

32. “That’s right. A girl who wants to play football. How about that?”

33. “It’s not funny, Bart. Millions of girls will grow up thinking that this is the right way to act—that they can never be more than vacuous ninnies whose only goal is to look pretty, land a rich husband, and spend all day on the phone with their equally vacuous friends talking about how damn terrific it is to look pretty and have a rich husband!”

34. “I just think it’s a fantasy. If you believe in angels, why not sea monsters, unicorns, or leprechauns?”

35. “I’d just like to remind you that we were all immigrants at one time.”

36. “According to Eternity Magazine, you can lose weight through subliminal learning. That’s where an idea is suddenly implanted in your head without you even knowing it.”

37. “But you know Bart, some philosophers believe that nobody is born with a soul. That you have to earn one through suffering and thought and prayer. Like you did last night.”

Lisa: “I think it distracts people from the more important social issues of today.”

39. “Mom, I know your intentions are good but aren’t the police the protective force that maintains the status quo for the wealthy elite? Don’t you think we ought to attack the roots of social problems instead of jamming people into overcrowded prisons?”

43. “Actually, keeping promises would make you a good father.”

44. “Dad, as intelligence goes up, happiness often goes down. In fact, I made a graph.”

45. “Cheer up, Dad. Did you know the Chinese use the same word for ‘crisis’ as they do for ‘opportunity?’”

46. “Dad! The second amendment is just a remnant from the revolutionary day. It has no meaning today.”

47. “Well, I wish that you wouldn’t. Because, aside from the fact that he has the same frailties as all human beings, he’s the only father I have. Therefore, he is my model of manhood.”

More Lisa Simpson Quotes That Will Help You Understand Romance

48. “Mom, romance is dead. It was acquired by Hallmark and Disney in a hostile takeover, homogenized, and sold off piece by piece.”

49. “That’s very nice, Dad, but it’s wrong for you to reward violent, competitive behavior. However, I will sit upfront with you if it’s a fatherly gesture of love.”

50. “I like him. He’s smart, he’s sensitive, he’s clearly not obsessed with his physical appearance.”

Did These Lisa Simpson Quotes Inspire You to Appreciate Yourself and Embrace Your Uniqueness?

Lisa Simpson is one of the most well-known cartoon characters on television. Rightly so, since her wisdom throughout the series is something that opens our eyes to life’s realities.

Despite being young, Lisa is genuinely herself and is not afraid to show the world what she can do. She did not let her age and gender hinder her from being vocal about her beliefs.

We all need a little Lisa Simpson inside us to inspire us to stand up for what we believe in. Never let anybody dictate what you can do or achieve based on social standards. Instead, break down the walls that society puts upon you and let your true self shine!

Which Lisa Simpson quotes inspired you to try new things despite social norms? We’d love to hear your insightful comments in the section below!