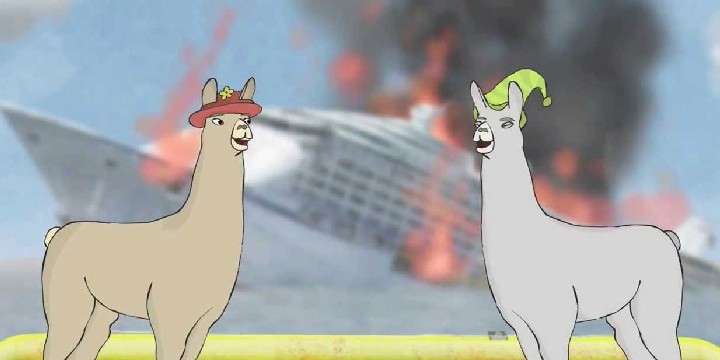 Though dark and grim, we’re sure you’ll be entertained by this collection of the best Llamas with Hats quotes!

Llamas with Hats is a short animated series produced by FilmCow. Its plot may seem straightforward enough, as, on the outside, it’s just about two llamas who are roommates. However, you’d be surprised at how gruesome and dark its humor really is.

Llamas are usually portrayed as social animals that can be good and gentle companions. However, Carl, the series’s protagonist, is the exact opposite of that. He just can’t help himself and continuously commits horrific acts that make his roommate, Paul, cringe and wince.

We’ve gathered some of the best quotes from the series that will make you squirm once you get to understand Carl’s true personality. So, if you’re curious, make sure you read through to the end!

And don’t forget to check out these South Park quotes and Adventure Time quotes.

1. “That was a foot—I appear to have swallowed an entire person.” – Carl

3. “My stomach was makin’ the rumblies that only hands could satisfy.” – Carl

4. Carl: “Shh—do you hear that? That’s the sound of forgiveness.”

Carl: “That is what forgiveness sounds like. Screaming and then silence.”

5. “I’m a dangerous sociopath with a long history of violence.” – Carl

Llamas with Hats Quotes That Will Make You Laugh

9. “You were headbutting children off the side of the ship!” – Paul

10. “I’m coming in, Paul! I’m sorry if this violates your restraining order, but it’s important!” – Carl

12. “All the hands are eaten, all the meat creatures are made—unleashed and also eaten.” – Carl

Carl: “That’s like saying all Mozart did was write songs.”

Deep Llamas with Hats Quotes to Make You Think

16. “You’ve always done something. It’s a lovely day out. We’re having a good time. What have you done?” – Paul

18. “Do you understand how it feels like to be Carl right now? It hurts—not as much as the babies, but it hurts.” – Carl

Carl: “Well, I guess you could say it is red and sticky.”

Paul: “Carl, what are we standing in?”

Carl: “Looking at the trajectory of the moon and sun, probably at the bottom of the ocean. I bit a lot of holes in them.”

Carl: “A dollop of fairy dust.”

24. Carl: “I miss your grumpy face. And the Paul mask I made hasn’t helped. It’s not grump enough.”

Carl: “Yes, and speaking of which, you might want to avoid being seen by federal investigators. To some, you are now known as Nikolai Sponakov, the brutal leader of the Russian opium cartel.”

25. Carl: “I’ve got nowhere to go. I burned my house down once it had enough swans inside, and I used up the rest of my savings buying the swans.”

Paul: “And whose fault is that, Carl?”

Carl: “Society. Society and the swans.”

Carl: “I don’t know about you but I’m having a lovely time here.”

Carl: “That hurt my feelings, now we’re both in the wrong.”

Carl: “In that case, I should probably mention that all our luggage is filled with orphan meat.”

29. Carl: “Friendship is two pals munching on a well-cooked face together.”

30. “It’s called modernism, only I’ve made it more modern by using the face parts of city council members.” – Carl

Did Carl’s Horrific Acts Make You See the Harsh Realities of the World?

The animated series instantly set the tone to be dark ever since the first episode. And as the main protagonist of the series, Carl is the only character who appeared from the first to the last episode. That’s 12 whole episodes of gruesome acts and violent actions!

Carl just can’t seem to stop being violent; he kept on doing bloody and vicious acts until the end. However, his roommate, Paul, couldn’t help the excuses, lies, and violence Carl kept saying and doing. Because of that, at some point in the series, he left Carl.

They’ve built some sort of connection and friendship over the time they spent together, though. And with that, Carl couldn’t let go of his attachment to Paul. That’s why he created a mask in Paul’s likeness to replicate the arguments and debates that he missed so much.

He became so obsessed with the masked version of Paul that he came to believe it was his real friend. Carl continued destroying everything in his path, but he discovered that the masked Paul wasn’t his real friend. While looking for the real Paul, he found out that he died, and overcome with grief and anger, he decided to end his life too.

Llamas with Hats is indeed a series that’s filled with dark humor. It’s hard to appreciate the lessons they’re trying to impart to the audience, if any. But, one thing’s for sure: it opened our eyes to the fact that life is not all sunshine and rainbows; there will always be some darkness in the world, and it is up to us to fight against it.

Did you learn anything from Llamas with Hats? Share them with us below!