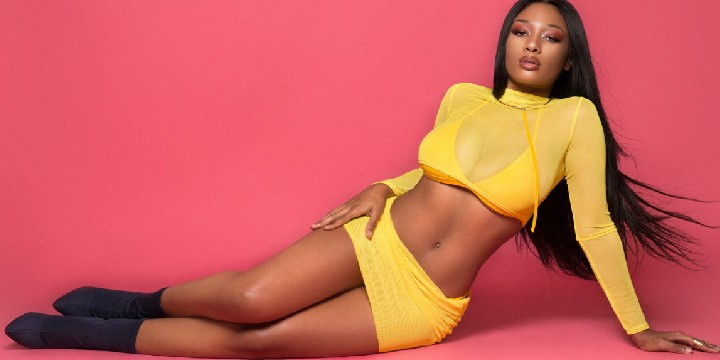 These Megan Thee Stallion quotes will help you develop your self-esteem to achieve success in life.

Megan Thee Stallion is an American rapper, musician, and lyricist.

She rose to prominence after videos of her freestyle became popular on social media platforms such as Instagram.

Millions of fans and supporters adore her empowering words and lyrics.

So, whether you’re a fan or someone who just wants to be inspired and motivated, make sure you browse our collection below!

And don’t forget to check out these Nicki Minaj quotes and Travis Scott quotes.

1. “Once you really know yourself, can’t nobody tell you nothing about you.”

3. “Confidence literally starts from yourself. You have to go look in the mirror at yourself. If you don’t like what you see, you’re going to give off that energy.”

4. “I feel like, when people realize that they are the only person they need to impress, everybody’s life will be a lot smoother.”

6. “Powerful women who have agency over their bodies aren’t something to look down on.”

8. “Everybody got their own swag.”

11. “I have over a hundred wigs, I like to change them damn near every hour.”

15. “I was raised by a woman who was her true and authentic self. So, I feel like it’s very important to put on for people who aren’t that confident or people who don’t realize the value in self-love.”

16. “I just want to be like a good example to somebody in the future.”

17. “Sometimes, when you’re doing too much, things get overwhelming. So, I just have to calm myself down and think, ‘What would my mama want me to do?’”

20. “We gotta break these double standards and get women to loosen up a bit. We gotta show them that we can do what we want to do how we want to do it. If someone doesn’t like it, they can get to stepping.”

22. “I really like how the characters always have to go through some type of long journey that’s like a crazy struggle. And these anime shows give women power. She’s always the queen or somebody that you cannot beat—I love that.”

30. “He say he feel intimidated when he talk to me. Got that hardcore but he want that R&B.”

Megan Thee Stallion Quotes on Being a Rapper

31. “Being a rapper and still trying to pursue an education is really overwhelming sometimes.”

32. “My mom is the first female rapper I’ve ever known. I’m thinking, like, ‘Okay, yeah, this is normal. Everybody’s doing this.’”

33. “I love being a female rapper and embracing my sexuality.”

36. “A lot of people’s favorite rappers will literally get in the booth and just make sounds.”

37. “My mom was a rapper. I would go to the studio with her, and that definitely showed me I can do this, I wanna do this.”

38. “I hate that people have made the term SoundCloud rapper into a bad thing because a lot of artists are underground and they don’t have a way to put their music on.”

39. “Girls, we have to go 10 times harder than guys. We are still expected to give you the bars, give you the look, give you the routine. This is me—I wanna be a rapper, this is it.”

40. “Us boss chicks have to continue to stick together and change the game.”

41. “A man could come in the room with his hair not cut, not done, pants around his ankles and people still gon’ be like, ‘Oh, that’s his style. It’s cool.’ Being a woman, you have to be on your P’s and Q’s at all times, because not only do you have to keep up your appearance for men, but other women judge you so hard.”

42. “You don’t have a lot of women doing things for women, so when I’m rapping I gotta talk all this mess so the women can feel as confident and empowered as the men.”

44. “Growing up listening to these men and how powerful and confident they seemed, I just thought, ‘Oh my God.’ This would sound really good if a girl was saying all this.”

45. “To be a hottie you gotta have a lot of self-love, a lot of confidence, you gotta be able to put your foot down. Hotties are supposed to turn other people into Hotties too. If you see someone that’s not quite confident, you gotta be the hottie to gas up your friend.”

46. “That’s what I feel like my music represents—having no limits or restrictions.”

47. “The main goal of my music is to make people feel strong and confident.”

51. “I’ve been like this forever. I’m sweeter, probably, but me and my homegirls were a little buck wild, ya know? And it only got worse.”

54. “I’m a pretty open person, and very little can embarrass me.”

55. “Before I do anything, I practice it for a while, and then when I know it’s the bomb, then I’m gonna present it to everybody.”

Megan Thee Stallion Quotes on Her Career and Music

61. “I feel like boys listen to my music. They just don’t like to admit it, but I go hard. But yeah, I feel like I go really hard, so why not listen to me? Anybody could relate to my music, honestly.”

64. “I don’t really feel like I done made it all the way. I feel like, ‘Okay, we did this. Then, we grinded enough to get to this point. Now, we gotta grind enough to get bigger and bigger,’ you know?”

65. “The first time I ever put on a cowboy hat for a video a lot of people on my team was like, ‘Are you sure? You know, we don’t want people we think we country.’ I’m like, ‘It’s cute! I don’t care what people think.’”

69. “My mom was a rapper and she really shaped me as a woman, and the music that she was letting me listen to as a child really pushed me in the direction that I’m going in right now.”

70. “My music is me letting the world know how confident I am in myself, and me basically telling other women, and guys, how confident and how comfortable I believe they should be.”

71. “Houston is a place where you have to be the best. Everybody gotta be flashy, flashy. It’s not like a gaudy thing, but people definitely put on their best dressed even if they go into Wal-Mart.”

74. “I feel like I have to put on for my city because we have so many legends and so many greats.”

75. “Just to know that the people in my city are really rocking with me, I just love it.”

76. “I definitely wanna open up some assisted-living facilities around my city.”

79. “When I was first coming out, I was definitely getting a lot of comparisons to Trina.”

82. “I don’t feel like my sound is similar to any female artist that’s out right now, so I definitely feel like we just need some Texas flavor.”

83. “I love beauty supply lip gloss. Any cheap, 99-cent lip gloss. I use it, it stays on all day. You can eat anything and it will still be on your lips. You can drink anything, it’s still on there.”

84. “Since you wanna test them waters, might as well jump in with both feet.”

Aggressive Megan Thee Stallion Quotes to Get Your Heart Pumping

88. “Put my feet up on the bed, ride it to the tip-top. He likes it doggy style ’cause I make that *ss pop. He never finna leave me ’cause I got that drop drop. Said this last b*tch still f*ck*n’ like a robot.”

91. “Any hoe got beef from years ago is beefing by herself.”

94. “Saucy like a barbecue but you won’t get your baby back.”

95. “Pull up in a Rolls Royce, finna rock a show, clique full of bad friends. We at Pappadeaux’s Rent due, finna let your baby daddy know.”

96. “Mandatory that I get the head but no guarantees on the penetration. I be texting with a bi chick we both freaky just tryin’ sh*t.”

98. “Got an ex that’s on his homeboy IG tryna stalk me out. Got an ex that miss it so bad, probably praying for me now.”

114. “I felt like my mixtapes were me flirting with my fans.”

116. “I definitely feel like people in the South are a little more raw. Our whole swag, the way we talk. When I go to the East Coast, people automatically know I’m not from there.”

118. “There were so many different labels coming to me and they just didn’t seem right, but 300—they wanted me bad. It felt like a family.”

120. “Being an XXL Freshman means that I actually grinded a lot to get here.”

121. “I like movies that make you semi fall in love with the villain so you have sympathy for him.”

128. “Everything you ever told me could have been a lie. We may never have been in love.”

Megan released her first mixtape in 2016, but she already had a large fan base. Rising from humble beginnings, she is now performing alongside musical superstars.

She received many awards throughout her career. In 2020, Time magazine named her one of the world’s 100 most influential people.

Aside from that, she is also a Black women’s rights activist. She speaks out about violence against women and the sexism of female rappers in the rap community.

This Houston gal teaches women how to love their bodies, take charge of their lives, and own their sexualities. Take your confidence to the next level! We hope you were able to take away some insightful lessons from this collection.

Have you ever listened to any of her music before? Which quotes are your favorites? Please, leave a comment below.