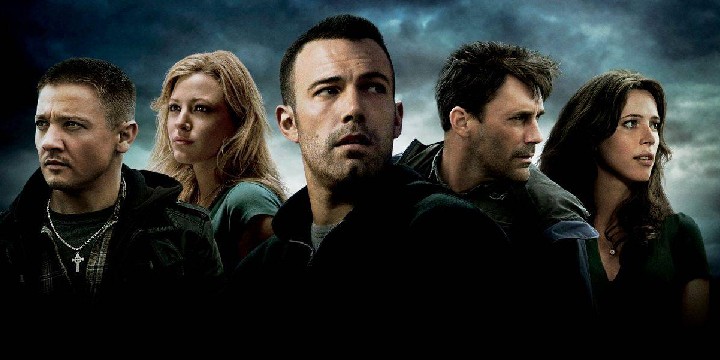 Whether you’re a big fan of thrillers and drama or not, these The Town quotes will make you perceive the world differently.

The Town is a jaw-dropping movie that tackles a variety of feelings—from admiration, regrets, and love.

As a result, the movie is regarded as one of the best thriller movies ever produced. Ordinary viewers became avid fans due to its unique storyline and Ben Affleck’s portrayal of Doug MacRay.

The plot has some uniquely intriguing turn of events, such as a bank robber who unexpectedly falls in love with his hostage.

This unique dilemma forced the characters to question their beliefs and moral values. Thus, meaningful realizations are brought to light, and the movie was able to impart lessons to its audience.

So, if you haven’t watched The Town yet, our selection below will give you an idea of how enjoyable this movie is. Don’t miss out on The Town’s best and most insightful lines.

And make sure to read these Die Hard quotes and Point Break quotes.

1. “No matter how much you change, you still have to pay the price for the things you’ve done. So I got a long road. But I know I’ll see you again—this side or the other.” – Doug MacRay

2. “‘Ya gotta chase the rabbit if ya wanna get some tail. My mother told me that.” – Krista Coughlin

3. “You grew up right here. Same rules that I did.” – James Coughlin

5. “Everyday people wake up and say they’re going to change their lives but never do. I’m making a change.” – Doug MacRay

6. “Look, I gotta die five times before I get outta here. But I’ll see you again—this side or the other.” – Stephen MacRay

7. “Not the way I planned it, but for the first time in my life, I’m leaving this city. Maybe if I go, I can stop looking.” – Doug MacRay

8. “Well if they were easy kid, everyone is gonna do them.” – James Coughlin

10. “Hey, Fergie. Remember who clipped your nuts for you.” – Doug MacRay

11. Doug MacRay: “I need your help. I can’t tell you what it is, you can never ask me about it later, and we’re gonna hurt some people.”

James Coughlin: “Whose car are we gonna take?”

12. “If we get jammed up, we’re holding court on the street.” – James Coughlin

14. “I know everything there is to know about money. Thickness, 0.0014 inches. Weighs about one gram. You know what that means? That means this $20 bill isn’t even worth its own weight in value for Oxycodone.” – Adam Frawley

Doug MacRay: “Boston Sanding Gravel, I break rocks. Punch the ticket at the end of the day, slide down the back of a Brontosaurus like Fred Flintstone, call it a night.”

James Coughlin: “Well, huh, it’s kinda both. The teacher’s used to always say, ‘Here take this one. He’s a gem.'”

Claire Keesey: “Why? I won’t believe you.”

Doug MacRay: “Yes you will.”

18. “This is the not-f*cking-around crew. So find me something that looks like a print, so that I can grab one of these *ssholes and shake their tree, cuz this ‘not-f*cking-around’ thing is about to go both ways!” – Adam Frawley

19. “You’re the one who’s vulnerable in this situation right now. The FBI are just people, like anyone else who wants to find the bad guy so that they can go home and do their supper. You have to look out for yourself, Claire.” – Doug MacRay

20. “Good, get one. Because it’s all about protecting yourself. Not even yourself. You have to protect your daughter.” – Adam Frawley

22. “Son, I knew your daddy. He worked for me for years. Years. Then he wanted his own thing. You play the horses? You know they either geld the horse with a knife or with chemicals. When your daddy said no to me, I did him the chemical way. Gave your mother a taste. Got the hook into her. Ahh, she doped up good and proper. Hung herself with a wire, on melnea cass. And you, running around the neighborhood looking for her. Your daddy didn’t have the heart to tell his son that he was looking for a suicide doper who was never coming home. If there’s a Heaven son, she ain’t in it.” – Fergus Colm

23. “The loss, you know what I mean? The disappointment in yourself. The anger that turns into disappointment. The despair. Like the guy who’s sittin’ at the bar and a priest walks in, pulls up a chair. The guy says, ‘Wait a minute.’ He says, ‘I hate to tell you this, don’t waste your time, but I happen to know there’s no God.’ The priest says, ‘Yeah, how’s that?’ The guy says, ‘I am an explorer in the north pole. I’ve been caught in a blindin’ storm once. Freezing. I was blinded, freezing to death and I prayed, if there is a God, save me now. Now God didn’t come.’ The priest says you know, ‘How’s that?’ He says, ‘You’re alive. He must have saved you.’ He said, ‘No. God never showed up. An Eskimo came along. Took me back to his camp and saved me.’ That’s Janice. She’s my wife and she’s sittin’ right there. She’s my Eskimo.” – Eskimo Story Speaker

Claire Keesey: “When the guy attacked David, I could see the back of his neck and he had a tattoo.”

Claire Keesey: “It was one of those fighting Irish tattoos. I’m afraid if I report it they’ll make me testify. What do you think I should do?”

Doug MacRay: “You tell the FBI. If the guy’s got a record, and I’m sure he does, they’ll have his tattoos on file. They’ll ring him up the next day. Robbery, weapons, he’ll get 30 years. Of course, he’ll worry someone’s gonna come looking for the witness. The FBI will probably want to put you in a WitSec, you know, witness security.”

Also read: Set It Off Quotes

The Town Quotes to Show How Harsh Prison Life Can Be

25. “When the judge asked him why he did it, he said, ‘I didn’t like the kid.’ Served nine years for manslaughter.” – Dino Ciampa

26. “A few days ago my bank was robbed. Four men took over and opened the safe. They took me as a hostage. They blindfolded me and drove me around. And then they stopped and let me out over at the beach and one of the guys told me to walk until I felt the water on my toes. It’s the longest walk of my life, I kept thinking I’d step off a cliff. And then I felt the water.” – Claire Keesey

28. “Now, we’re a long way away from a grand jury here and we’ll never get 24-hour surveillance unless one of these idiots converts to Islam. So, we build the case. Alright, let’s get to work.” – Adam Frawley

The Town Quotes to Highlight the Characters’ Bold Personalities

29. “Who the f*ck do you think you are? You’re gonna let me or not let me do sh*t. Here’s a little f*cking cheat sheet for you. It’s never gonna be me and you and your sister and Shyne playing house up there. You got it? Get that in your f*cking head! I’m tired of your f*cking one-way bullshit. You wanna see me again? You can come visit me down in Florida.” – Doug MacRay

30. “Alright, I’m in. But if anything happens to her—if I think anything might happen to her—I’m gonna come back here, and I’m gonna kill both of you in your own shop.” – Doug MacRay

31. “Alright. Okay. Let me ask you something: Who the f*ck do you think you are? The only guy in Charlestown with a gun? You guys run numbers and pump dope. You’re an old guy with a f*cked up face, so all those glory years are behind you. I ain’t f*cking working for you. Got it? If you got a problem with that, I live at 551 Bunker Hill St. Stop by anytime. You know where to find me.” – Doug MacRay

32. “You thinking of running out on me? Not gonna work. Because once I start waving this, it’s trouble for you.” – Adam Frawley

Sarcastic The Town Quotes for Your Daily Dose of Laughter

34. “Hey, the next time you wanna take pictures of me, just call ahead, you know we can do better than a barbecue, a calendar shoot? You know, maybe topless, lubed up, whatever you guys are into? The FBI car antennas are half-inch matte black about three-quarters way down the rear windshield. Statie a pigtail, BPD half and half. Every pewee in town knows what an FBI rear antenna looks like. So in the future, you guys need to try to be slick, be slicker than a six-year-old. I gotta get back to work. Can I go? ” – Doug MacRay

35. “Well I know your happy in f*ck-city over there but I waited nine years in Walpole for you motherf*cker, just nine years that’s all. I’m done waiting.” – James Coughlin

37. “You need a f*cking Venn diagram for these people.” – Dino Ciampa

40. “This is your f*cking pineapple pizza?” – James Coughlin

Short The Town Quotes to Remember

More The Town Quotes That Highlight Their Nature of Work

47. “Cash is brought out and stacked 15 minutes before the van does the pickup. That is when you hit. On Monday morning, before the game stands in New York, 60,000 beers, food, merchandise. Total call: three and a half million. Taking down the Cathedral of Boston? Priceless.” – Fergus Colm

48. “Where are they? What are they doing right now? They got the money, now they have to clean it. Casino’s, tracks, maybe they make a big drug buy, flip it across town. They wanna go celebrate, right? VPD, DEA. I want chips, names, witnesses. Anything. We’re gonna knock on some doors to see who wants to help us out. Any questions? No. Great. Let’s go.” – Fergus Colm

49. “In the cash room. Arnold Washton! You live at 311 Hazer Street in Quincy, with a wife named Linda and three small dogs. Do not make a distress call. Also in the cash room, Morton Previt. You live at 27 Counting Lane, Randolph. Wife is also Linda. Morton, the Lindas want you to open this door. We have men outside your homes.” – Doug MacRay

50. “Tell me you got a move here, Dougie. ‘Cause the only way I see it, is that you got sprung like a godd*mn bear trap on some toonie p*ssy who happens to be the one godd*mn person that can give us to the f*cking feds.” – James Coughlin

Did Our Collection Influence Your Understanding of Life and Its Conflicts?

The Town is one of the most well-known movies of all time. Even though it is set to have an intense and nerve-racking mood, it still did not fail to deliver the softest and most meaningful message to its viewers.

Its unique plot zooms in on how our core values are influenced by the presence of genuine love and affection. We may make mistakes and make wrong decisions like Doug. But, if we have a friend like James, we know that someone will always stick with us.

Additionally, it also helps us understand that friends can be found everywhere—even when we think we do not deserve to have one. This lesson is highlighted when Doug met Claire and formed a genuine bond.

With that, we hope these quotes we’ve gathered were able to motivate you to cherish and value the relationship you form with others. Remember, true friends will stand by you​​—even when you think you’ve made the biggest mistake of your life. They will be the ones to lift you up and help you find your way back to goodness.

Will you share these quotes with your best friends? Have you watched the movie before? Share your thoughts below.