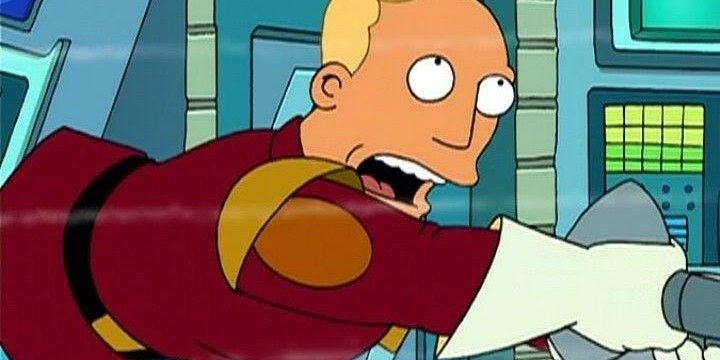 Explore the best annoyingly hilarious Zapp Brannigan quotes to learn about his overflowing self-confidence and charisma.

Zapp Brannigan is one of the main characters of the American science fiction sitcom Futurama.

He is the vain and incompetent military officer of the Democratic Order of Planets and Earth’s Government.

One of his iconic features is how he claims to have a learning disorder called Sexlexia that hinders his intelligence in an intimate nature.

Despite his complex personality, Captain Zapp remains one of the most dedicated and loyal soldiers, even if he does not fully understand what it means.

His persuasive nature makes him an effective leader in increasing the spirits and motivation of his troops.

On the surface, Zapp continues to appear to the people as a hero.

Through this collection, we can all get to know more about his flaws and authentic self.

Read the entire collection below.

And don’t forget to check out these Futurama quotes and Bender quotes.

1. “I am the man with no name. Zapp Brannigan, at your service.”

3. “When I’m in command, every mission is a suicide mission.”

4. “If we hit that bullseye, the rest of the dominoes will fall like a house of cards. Checkmate.”

5. “The key to victory is the element of surprise. Surprise!”

6. “We need rest. The spirit is willing, but the flesh is spongy and bruised.”

7. “I surrender and volunteer for treason.”

8. “That young man fills me with hope. Plus some other emotions which are weird and deeply confusing.”

9. “My instinct is to hide in this barrel, like the wily fish.”

11. “I’ve never heard of such a brutal and shocking injustice that I cared so little about!”

12. “Your face has been declared a weapon of mass disgusting!”

14. “I want to slap your sister with a slice of bologna.”

16. “We have failed to uphold Brannigan’s Law. However, I did make it with a hot alien babe. And in the end, is that not what man has dreamt of since first he looked up at the stars? Kif, I’m asking you a question.”

17. “I’ll take it. We’ll meet you tonight for part of dinner and the first half of a movie.”

20. “You won’t have time for sleeping, soldier, not with all the bed making you’ll be doing.”

24. “You look like a woman who enjoys the finer things. Come over here and feel my velour bedspread.”

25. “Happy Freedom Day, ladies! Come on, show me something. Anything. Seriously, I’d take an armpit.”

31. “In the game of chess, you can never let your adversary see your pieces.”

32. “We know nothing about them, their language, their history, or what they look like. But we can assume this. They stand for everything we don’t stand for. Also, they told me you guys look like dorks.”

34. “It was almost the perfect crime, but you forgot one thing: rock crushes scissors, but paper covers rock and scissors cut paper. Kif, we have a conundrum. Search them for paper, and bring me a rock.”

35. “Now, like all great plans, my strategy is so simple an idiot could have devised it.”

36. “That’s for schoolgirls. Now here’s a course with some chest hair.”

39. “Dammit, Kif! Where’s the little umbrella? That’s what makes it a scotch on the rocks.”

41. “We both know you won’t make it halfway to Vergon 6 before the craving sets in. Then you’ll come crawling back for another taste of sweet, sweet candy, bam!”

43. “Call me cocky, but if there’s an alien out there, I can’t kill. I haven’t met him and killed him yet. But I can’t go in alone. That’s why I’m ordering every available ship to report for duty. Anyone without a ship should secure a weapon and fire wildly into the air.”

44. “You see, Killbots have a preset kill limit. Knowing their weakness, I sent wave after wave of my own men at them until they reached their limit and shut down.”

46. “You! Aren’t you getting this? We have detected a vessel attempting to break the security cordon around Vergon 6. I’m anticipating an all-out tactical dogfight, followed by a light dinner ravioli, ham, sundae bar.”

48. “I hate these filthy Neutrals, Kif. With enemies, you know where they stand but with Neutrals, who knows? It sickens me.”

50. “Then throw her in the laundry room, which will hereafter be referred to as ‘the brig.'”

52. “Killbots? A trifle. It was simply a matter of outsmarting them.”

54. “As my protege, you should know that the only way to deal with a female adversary is to seduce her.”

55. “So, a plan to assassinate a weird-looking alien with scissors. How very neutral of you.”

Zapp Brannigan Quotes to Think About

57. “Captain’s log. Stardate: The Year of the Tiger. The battle has been bravely fought, and the suffering of our troops, beyond measure. But the alien is invulnerable, and our defeat, inevitable. That much is certain, even from my remote command post here at the Times Square Applebee’s.”

62. “Up here in the clouds, our technology makes us invincible, like the mighty ‘X’ in tic-tac-toe.”

63. “What troubles you, Leela? Whatever it is, I’m willing to send wave after wave of my own men to aid you. Isn’t that right, men?”

64. “Don’t blame yourself, Kif. We were doomed from the start. I guess all that remains now is for the captain to go down with the ship.”

65. “A split second is all it takes. That’s why sooner or later you’ll come crawling back to the Zapper.”

66. “Kif, you’re my best and most loyal friend but you’ve earned my contempt once again.”

69. “We’ll write our own Bible, with less Sodom and more Gomorrah.”

In 1999, Matt Groening, the creator of Futurama, publicized the show on Fox Broadcasting Company. Its release was immediately nominated and won the show for numerous Annie Awards and Emmy Awards. Matt created Futurama while producing The Simpsons, evident in the show’s similarities of art style and satirical comedic theme.

The character of Zapp was inspired by Captain Kirk from Star Trek and Flash Gordon, which is evident in his appearance and personality. Futurama successfully captured the parodical versions of the original films and series that made it a hit show to teens throughout the show.

While it is a show for laughs, Futurama is a series full of lessons, heart-wrenching episodes, and character development. It subtly features maturity and compassion with its nerdy and satirical scriptwriting.

So, did you like this collection of Zapp Brannigan quotes from Futurama? What other lines did you love from his character? Join the comment section below!