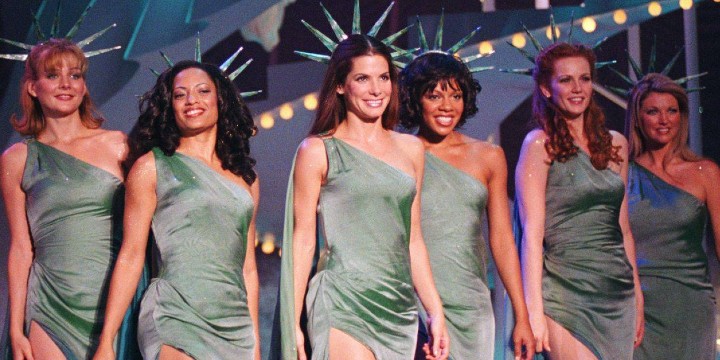 We’ve collected the top 50 Miss Congeniality quotes that every Sandra Bullock fan can learn from!

Miss Congeniality is a comedy movie about an FBI Special Agent who needs to join a pageant to protect the candidates from a terrorist.

Although the show is made for laughs, it is a box-office hit that will teach you about life and pursuing your dreams.

Everyone who watched the movie can agree that Gracie Hart is one of the most iconic characters brought to life by Sandra Bullock.

This is because she is a feminist who proved that you could be both strong and beautiful.

If you need some quotes to make you laugh and brighten your day, add this to your must-read list now.

Check out the complete collection below to learn more about Miss Congeniality and its characters.

And don’t miss out these Nacho Libre quotes and Anchorman quotes.

1. “People only care about people who care about themselves.” – Gracie Hart

4. “I came here, and I realized that these women are smart, terrific people who are trying to make a difference in the world. We’ve become really good friends. This has been one of the most rewarding and liberating experiences of my life.” – Gracie Hart

6. “Because you’re smart, because you don’t take any crap from people. You’re funny. You’re easy to talk to when you’re not armed. Look, give yourself a break. Cut Vic and the other pageant ladies some slack ’cause if they ever get a chance to see what I see then, they’re gonna love you.” – Eric Matthews

8. “I’ve never been prouder. Or, of any girls that I have coached, you are truly unique. If I ever had a daughter, I’d imagine that she would be something like you.” – Victor Melling

9. Eric Matthews: “Don’t look at me like I betrayed you.”

Gracie Hart: “No, betrayal implies an action. You just stood there!”

10. “I haven’t seen a walk like that since Jurassic Park.” – Victor Melling

Cheryl Frasier: “That’s a tough one. I would have to say April 25th because it’s not too hot, not too cold. All you need is a light jacket.”

12. Kathy Morningside: “Well, I earned it, honey. Twenty-five years of bitch and beauty queen, and what do I get? Fired, they steal my life. They steal my beauty pageant.”

Gracie Hart: “Hey! Hey, it is not a beauty pageant. It is a scholarship program.”

13. “You know what? I don’t have relationships because I don’t want them, and I don’t have friends because I work 24/7. And you have no idea why I am the way that I am.” – Gracie Hart

15. “One time, I stole red underwear from the department store. My mother wouldn’t buy them for me. She said they were Satan’s panties.” – Cheryl Frasier

16. Eric Matthews: “Just imagine that she’s me, and there’s something you wanna know, but I don’t wanna talk about it. What would you do?”

Gracie Hart: “You want me to beat it out of her?”

17. “‘Cause I’m not gonna parade around in a bathing suit by the name Gracie Lou Freebush and all she wants is world peace?” – Gracie Hart

18. “Ten out of eleven years, my girls were crowned. The year we lost, the winner was a deaf-mute. You can’t beat that.” – Victor Melling

20. “Good evening, I know the program says I’m supposed to play the water glasses for you, but some of the girls got dehydrated.” – Gracie Hart

21. “Prepare for what promises to be a day of astounding musical, theatrical, and dancing talent. And after I’m finished, you can see the ladies!” – Stan Fields

22. “I know I am going to miss the heels because they do something for my posture, and I’m suddenly very aware and proud of my breasts.” – Gracie Hart

23. Kathy Morningside: “I would much rather cancel the show than have my girls blown up.”

Stan Fields: “Especially without their knowledge.”

25. “The last time I was this naked in public, I was coming out of a uterus!” – Gracie Hart

26. Victor Melling: “The interview is the single most important part of the pageant. It counts for 30% of your total score.”

27. “If I’d ever had a daughter, I imagine she might have been something like you, which is perhaps why I’ve never reproduced.” – Victor Melling

28. Eric Matthews: “We were just looking for someone to go undercover at the Miss United States Pageant, sir.”

Harry McDonald: “And I’m the best we got. That doesn’t inspire much confidence.”

29. Victor Melling: “Your hair should make a statement.”

Gracie Hart: “As long as it doesn’t say ‘Thank you very much for the Country Music Award!'”

30. Gracie Hart: “Look, I know what I’m gonna do. I haven’t done this since high school, but it’s like riding a bike.”

Victor Melling: “You are not having sex on this stage.”

Gracie Hart: “I didn’t know that was an option.”

31. “Of course, he had a gun. This is Texas! Everybody has a gun. My florist has a gun!” – Kathy Morningside

Victor Melling: “As long as you smile.”

33. Stan Fields: “What is the one most important thing our society needs?”

Gracie Hart: “That would be harsher punishment for parole violators and world peace!”

34. “New Jersey, as you may know, there are many who consider the Miss United States Pageant to be outdated and de-feminist. What would you say to them?” – Kathy Morningside

35. Kathy Morningside: “You think you saved something tonight, but all you did was destroy the dream of young women all over this country.”

Gracie Hart: “What? You think that their dream is to get blown up?”

36. “By the way, what are you planning to do for your talent: sing, dance, chew with your mouth closed?” – Victor Melling

37. “Sorry, what was the question? I was distracted by the half-masticated cow, rolling around in your wide-open trap.” – Victor Melling

Hilarious Miss Congeniality Quotes to Fill Your Belly With Laughter

38. “In a way, America’s like a big ship. And when we all work together and respect each other, that’s when the ship gets safely home.” – Cheryl Frasier

39. Eric Matthews: “This earpiece lets you hear anybody on our frequencies, and they can hear you.”

Gracie Hart: “Don’t need that. With all this foil in my hair, I’m getting HBO.”

Eric Matthews: “No! Just casual dinner. If we happen to have sex afterward, so be it!”

41. Victor Melling: “Why is New Jersey called ‘The Garden State?'”

Gracie Hart: “Why? You’re shutting up enough for both of us.”

44. “And if anyone tries to hurt one of my new friends, I would take them out. I would make them suffer, and if they ran, I would hunt them down. Thank you, Kathy.” – Gracie Hart

Gracie Hart: “Yeah. I mean ‘yes.’ I mean have I offended you in some way because quite frankly you’ve been completely antagonistic since the second I walked through that door.”

46. Victor Melling: “In place of friends and relationships, you have sarcasm and a gun!”

Gracie Hart: “Oh, I have sarcasm? When every word that comes out of your mouth is dripping with disdain?”

Victor Melling: “Ah! That is because I am a miserable, grumpy elitist, and that works for me!”

47. “We can all learn from our older generations. I remember I learned a lot from my grandmother.” – Cheryl Frasier

More Miss Congeniality Quotes for Everyone Who Watched the Second Movie

48. “I was dating him for a little while because he said he had an incurable disease. I didn’t realize it was stupidity.” – Gracie Hart

Gracie Hart: “You heard me. I said how about a real sorry.”

Sam Fuller: “You are about to feel some real pain if you don’t back off.”

Gracie Hart: “You don’t want to talk to me about pain, sister. I invented pain alright.”

Sam Fuller: “You didn’t just call me sister, because I don’t recall seeing a little skinny ass white girl around the table growing up.”

Gracie Hart: “Hey! First of all, thank you for calling me skinny. Second of all, what is your problem, and third of all, you’d better apologize to me.”

Did These Miss Congeniality Quotes Make You Think About the Ridiculous Expectations Society Set on Women?

Even before, women have always been set to a higher standard than men. They are expected to be kind, compassionate, and decisive. At the same time, society expects them to always look beautiful, poised, and graceful.

In Miss Congeniality, Gracie represents all the women who stood firm against society’s standards. She embodied beauty and let the world recognize that this adjective isn’t only meant to describe outward attributes. Real beauty and strength, after all, are found within.

Indeed, Sandra Bullock’s character is an inspirational icon for many women. With that, we hope that these quotes were able to help you see the world and women differently. Make sure to revisit our collection if you need some perspective and a pick-me-up.

Which quote is your favorite? Have you watched the movie? Comment below.