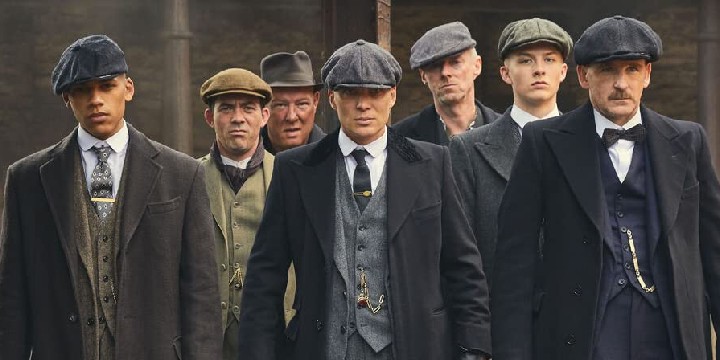 If you need the motivation to keep going in the face of adversity, then these Peaky Blinders quotes are for you.

Peaky Blinders is a period drama set in Birmingham, England, in the 20th century. The plot follows a family of gangsters as they rise to power and exact revenge on those who have wronged them.

A gangster’s life is not easy. Aside from the stereotype that they are society’s bane, their lives are constantly in jeopardy. In the series, as the gang leader, Tommy tried everything he could to be the best gang boss in town, resulting in his wife’s loss.

This turning point taught him that you could not have all you desire in life. No matter how powerful or affluent you are, you will never be happy without your loved ones.

If you’re curious about the plot and what other realizations the characters have, take a look at the Peaky Blinders quotes below. We’re sure you’ll get a glimpse into their complicated life and leave with some valuable lessons too.

And make sure to read these Tommy Shelby quotes and Sons of Anarchy quotes.

3. “For those who make the rules, there are no rules.” – Tommy Shelby

4. “All religion is a foolish answer to a foolish question.” – Tommy Shelby

5. “Intelligence is a very valuable thing, innit, my friend. And usually, it comes far too f*cking late.” – Alfie Solomons

6. “An agreement is not the same thing as an assurance.” – Chester Campbell

7. “In all the world the only thing that interests me is the truth.” – Chester Campbell

8. “When you plan something well there’s no need to rush.” – Tommy Shelby

9. “When there are no rules, women take charge.” – Tatiana Petrovna

11. “To make sure your dog obeys you, you have to show it the stick once in a while.” – Chester Campbell

12. “The only way to guarantee peace is by making the prospect of war seem hopeless.” – Tommy Shelby

13. “Life is so much easier to deal with when you are dead.” – Alfie Solomons

15. “I don’t need a knife to stop me telling secrets given in confidence. It is a matter of honor.” – Esme Shelby

19. “People are loyal to those who pay their wages.” – Tommy Shelby

22. “I’m not a traitor to my class. I am just an extreme example of what a working man can achieve.” – Tommy Shelby

23. “Please don’t listen to my sister’s opinions of me. They are always hopeful. Therefore they are always wrong.” – Tommy Shelby

24. “There is no rest for me in this world. Perhaps in the next.” – Tommy Shelby

27. “Five for peace, two for truce, one abstention. Let’s get on with the war.” – Tommy Shelby

28. “I have made arrangements with men I trust. If I should die, then you will die, know that.” – Tommy Shelby

29. “People thinking I’m going to fall, they start behaving in a different way around you.” – Tommy Shelby

30. “There’s a part of me that is unfamiliar to myself. And I keep finding myself there.” – Tommy Shelby

31. “There’s good in my heart, but these hands belong to the devil.” – Arthur Shelby

33. “This place is under new management, by order of the peaky blinders.” – Arthur Shelby

34. “In the end, it’s God who pulls that f*cking trigger anyway. We don’t get to decide who lives and who dies, Finn. Not us. You just have to flick a switch.” – Arthur Shelby

35. “I’m an old man and my heart’s battered vessel, but within, there still beats a fluttering pulse of a dream.” – Arthur Shelby

36. “Are you f*cking repenting or something?” – John Shelby

37. “Anyway, we’re Peaky Blinders. We’re not scared of coppers. If they come for us, we’ll cut them a smile each.” – John Shelby

38. “Aunt Pol, when I was Michael’s age I’d killed a hundred men and seen a thousand die. If you want to scare that kid away forever, carry on how you’re going. If you want him to stay, let him come.” – John Shelby

40. “Sometimes the women have to take over. Like in the war.” – Aunt Polly

45. “You have your mother’s common sense but your father’s devilment. I see them fighting. Let your mother win.” – Aunt Polly

46. “My senior position within the Shelby company means I don’t often have to ask permission from anyone to do anything.” – Aunt Polly

47. “Men don’t have the strategic intelligence to conduct a war between families. Men are less good at keeping secrets out of their lies.” – Aunt Polly

Also read: Schitt’s Creek Quotes, This Is Us Quotes

50. “These bastards only understand one language.” – Alfie Solomons

52. “You are behaving like a f*cking child. This is a man’s world.” – Alfie Solomons

54. “Don’t come in here and sit there in my chair and tell me that I’m losing my war to a f*cking wop.” – Alfie Solomons

55. “I, my friend—I am the uncle, and the protector, and the promoter of that f*cking thing right there, in whose shadow nothing good nor godly will ever f*cking grow.” – Alfie Solomons

57. “These days, people tell me things without even speaking.” – Tommy Shelby

58. “Fortune drops something valuable into your lap, you don’t just dump it on the bank of the cut.” – Tommy Shelby

59. “Everyone’s a wh*re, Grace. We just sell different parts of ourselves.” – Tommy Shelby

61. “A man needs to prove he is better than me, rather than show me his birth certificate.” – Tommy Shelby

Peaky Blinders Quotes That Show How Everyone Can Fall in Love

64. “I learned long ago to hate my enemies, but I’ve never loved one before.” – Tommy Shelby

65. “Men like us, Mr. Shelby, will always be alone. And what love we get, we will have to pay for.” – Chester Campbell

66. “Oh. And there’s a woman. Yeah. A woman I love—and I got close. I nearly got f*cking everything!” – Thomas Shelby

67. “You can never tell with men. They go for whoever their dicks point at, and there’s no changing their minds.” – Aunt Polly

68. “You’ve told me about her, like a gentleman, now kindly behave like a gangster again.” – May Carleton

69. “She’s in the past. The past is not my concern. The future is no longer my concern, either.” – Tommy Shelby

71. “He’ll wake up. Granted he won’t have any teeth left but he will be a wiser man for it.” – Alfie Solomons

72. “I can charm dogs. Gypsy witchcraft. And those I can’t charm, I can kill with my own hands.” – Tommy Shelby

73. “F*cking hell, it smells of pig round here, don’t it? Definitely not kosher.” – Alfie Solomons

74. “In all the world, violent men are the easiest to deal with.” – Irene O’Donnell

77. “It’s business, Grace. And bad, bad business it is all around. And I’m scared, Grace. I’m scared for you. I’m scared for the baby. And this is how I am when I’m scared. It is unfamiliar to you but not to me. I can f*cking be scared and carry on. And it’s not pleasant to look at and no joy to be around.” – Tommy Shelby

78. “What f*cking line am I supposed to have crossed? How many fathers, right, how many sons, yeah, have you cut, killed, murdered, butchered, innocent, and guilty, to send straight to f*cking hell, ain’t ya? Just like me!” – Alfie Solomons

79. “I know that you all want me to say that I’ll change, that this f*cking business will change, but I’ve learned something in the last few days. Those bastards. Those bastards are worse than us. Politicians, f*cking judges, lords, and ladies. They’re worse than us, and they will never admit us to their palaces, no matter how legitimate we become because of who we are.” – Tommy Shelby

Peaky Blinders Quotes to Help You Understand Life and Death

Short Peaky Blinders Quotes for Fans of the Series

92. “When my judgment comes, I’ll be the one that’s laughing.” – Chester Campbell

93. “I find the more obvious vices the easiest to resist.” – Chester Campbell

94. “Men always tell their troubles to a barmaid.” – Grace Burgess

95. “A good man needs to hold out sometimes.” – Tommy Shelby

More Peaky Blinders Quotes for You to Enjoy

98. “May you be in heaven a full half-hour before the devil knows you’re dead.” – Grace Burgess

99. “In pubs sometimes people say things and sometimes it’s the whisky talking. It’s hard to tell which is which.” – Tommy Shelby

100. “The problem, right, between rum and gin, is that gin, right, it leads to the melancholy. Whereas rum incites violence, it also allows you to be liberated from your self-doubt.” – Alfie Solomons

Did These Quotes Give You an Idea of How Tough Survival Can Be In the Life of a Gang?

Peaky Blinders is a crime drama about the various gangs that emerged after World War I. One of them is Peaky Blinders, a gang led by Thomas Shelby, a ruthless and ambitious man.

Thomas Shelby works tirelessly despite his humble beginnings to make his gang the best in town. Even though he is only an adopted son, he proves that he deserves to be a part of the family. Through this, he teaches the audience one of the main lessons you can gather from the series—that you can only reach the top with hard work and dedication.

Peaky Blinders has a lot of lessons to teach, despite the violence it portrays. Some of these lessons include realizing that we cannot always get what we want and that it is sometimes better to be content with what we have. Remember, some things come with a significant cost—one that we might not be willing to pay.

We hope this collection of Peaky Blinders quotes was able to open your eyes to the realities of gang life, as well as what the characters can teach you. Keep in mind that nothing good will come to you if you take the road of evil. So, make sure you consider all your decisions and what consequences may come with them before acting.

1 thought on “100 Peaky Blinders Quotes on Life, Survival, and More”