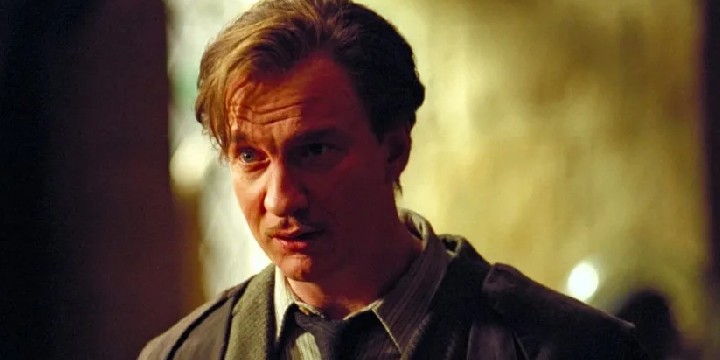 These Remus Lupin quotes will prove why he is one of the most loyal and kind characters in the Harry Potter saga.

Remus Lupin is a half-blood wizard and the Defense Against the Dark Arts professor who taught Harry Potter about the Patronus Charm.

From his first appearance until the end, we see just how much he is willing to sacrifice for the sake of his friends and loved ones.

J.K. Rowling created many wonderful characters, but Remus might just be one of the most inspiring.

He suffered from prejudice his whole life for being a werewolf, but he still never failed to be compassionate and see the best in people.

Indeed, Remus is a wise and kind professor that leaves a legacy through his meaningful words.

So, if you need some enlightening quotes that you will enjoy, then read our entire collection below.

And don’t forget to check out these Sirius Black quotes and Severus Snape quotes.

1. “You can exist without your soul, you know, as long as your brain and heart are still working. But you’ll have no sense of self anymore, no memory, no anything. There’s no chance at all of recovery. You’ll just exist as an empty shell, and your soul is gone forever, lost.”

3. “It made all the difference in the world. You saved an innocent man from a terrible fate. It made a great deal of difference.”

4. “Give five signs that identify the werewolf. Excellent question. One: he’s sitting on my chair. Two: he’s wearing my clothes. Three: his name’s Remus Lupin.”

5. “Dementors force us to live our very worst memories. our pain becomes their power.”

6. “He will know why I died, and I hope he will understand. I was trying to make a world in which he could live a happier life.”

7. “I’m very impressed. That suggests that what you fear the most is fear itself. That is very wise.”

8. “People are disappearing daily. If we start fighting amongst ourselves, we’re doomed.”

9. “You are not weak, Harry. The dementors affect you worst of all because you have true horrors in your past. You have nothing to be ashamed of.”

Remus Lupin Quotes That Are Full of Meaning

10. “It is the quality of one’s convictions that determines success, not the number of followers.”

12. “Gambling their sacrifice by wandering around the castle unprotected with a killer on the loose seems to me to be a pretty poor way to repay them.”

13. “She had a way of seeing the beauty in others, even, and perhaps most especially, when that person couldn’t see it in themselves.”

14. “Dementors are among the foulest creatures that walk this earth. They infest the darkest, filthiest places. They glory in decay and despair. They drain peace, hope, and happiness out of the air and around them. Even Muggles feel their presence, though they can’t see them.”

15. “The ‘Boy Who Lived’ remains a symbol of everything for which we are fighting: the triumph of good, the power of innocence, the need to keep resisting.”

16. “You know your father never was one to abide much by the rules either, but he and your mother gave their lives to save yours!”

Remus Lupin: “Well, I’d consider you a fool if you weren’t.”

Remus Lupin Quotes That Highlight the Value of Loyalty and Friendship

18. “You should have realized. If Voldemort didn’t kill you, we would. Goodbye, Peter.”

19. “Your parents gave their lives to keep you alive, Harry.”

20. “The very first time I saw you, Harry, I recognized you immediately. Not by your scar, by your eyes. They’re your mother, Lily’s. Yes, I knew her. Your mother was there for me at a time when no one else was. Not only was she a singularly gifted witch. She was also an uncommonly kind woman.”

21. “I think you’re like James, who would have regarded it as the height of dishonour to mistrust his friends.”

22. “You fool. Is a schoolboy grudge worth putting an innocent man back inside Azkaban?”

23. “Not at all up to your usual standard, Hermione. Only one out of three, I’m afraid. I have not been helping Sirius get into the castle, and I certainly don’t want Harry dead. But I won’t deny that I am a werewolf.”

24. “Considering I am no longer your teacher, I feel no guilt whatsoever in letting you have this back. Now, I will say goodbye, not for long though, as I am sure we’ll meet again. But until then, mischief managed.”

Remus Lupin Quotes to Better Understand His Relationship With the Potters

25. “Harry, I’m sure James would have wanted me to stick with you.”

26. “Just so you know, Harry. I think you would have given your father a run for his money, and that is saying something.”

27. “Sometimes, you remind me a lot of James. He called it my ‘furry little problem’ in company. Many people were under the impression that I owned a badly behaved rabbit.”

Remus Lupin Quotes That’ll Hit You Right in the Feels

29. “I am not being ridiculous. Tonks deserves somebody young and whole.”

30. “Your father, James, however, had a certain, shall we say, talent for trouble. A talent, rumour has it, he passed onto you. You’re more like them than you know, Harry. In time, you’ll come to see just how much.”

Remus Lupin Quotes to Learn About His Story

31. “I was a small boy when I received the bite. My parents tried everything, but in those days, there was no cure.”

32. “My transformations in those days were, were terrible. It is very painful to turn into a werewolf. I was separated from humans to bite, so I bit and scratched myself instead. The villagers heard the noise and the screaming and thought they were hearing particularly violent spirits.”

34. “By this time tomorrow, the owls will be arriving, and I’m sure parents won’t want a, well, someone like me teaching their kids.”

35. “And I’ve told you a million times that I am too old for you, too poor, too dangerous.”

36. “Just remember, Fleur, Bill takes his steaks on the raw side now.”

38. “Mr. Moony presents his compliments to Professor Snape and begs him to keep his abnormally large nose out of other people’s business.”

39. “Once again, you’ve put your keen and penetrating mind to the task and, as usual, come to the wrong conclusion!”

40. “I was hoping that Neville would assist me with the first stage of the operation, and I am sure he will perform it admirably.”

Do You Have Someone Who Brings Out the Best in You?

In life, there will be times when bad days affect us significantly and make us feel worse about ourselves. But, we should remember that we have friends and loved ones who will help shine a light and bring us out of the darkness.

The world is indeed a terrifying place. Thankfully, most of us have someone like Remus Lupin who can bring out the best in us—someone who assists others so their fears and selfishness will not swallow them. Or, even if you don’t have a friend like that, be inspired to be like Remus, who has endless compassion and love for the people close to him.

With that, we hope that these Remus Lupin quotes were able to fill your heart with kindness and understanding for yourself and others. Bookmark this collection so you have something to look back on when you find yourself being swallowed by your dark days.