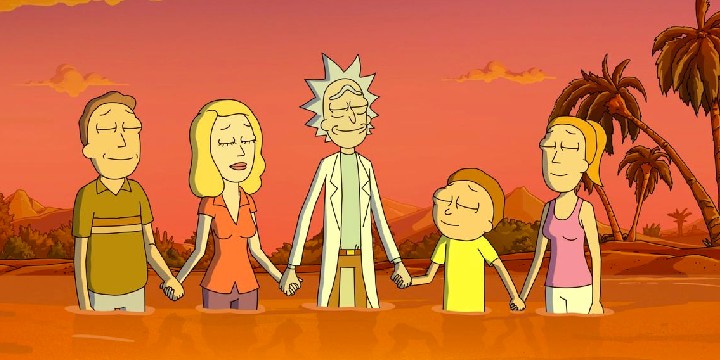 Allow these Rick and Morty quotes to open your eyes to reality and comedy!

Justin Roiland and Dan Harmon created the American adult animated sci-fi sitcom, Rick and Morty. It tells the story of an alcoholic scientist who travels through the multiverse with his naive grandson. This duo did so many absurd things throughout the series, one of which is blowing up an alien race!

Looking at it lightly, Rick and Morty appears to contain only hilarious, meaningless, and dark lines. However, every episode can offer us a nugget or two of advice. Browse our collection below to learn more.

And don’t forget to check out these Rick Sanchez quotes and Hank Hill quotes.

1. “To live is to risk it all; otherwise, you’re just an inert chunk of randomly assembled molecules drifting wherever the universe blows you.” – Rick

2. “I know that new situations can be intimidating. You’re lookin’ around, and it’s all scary and different, but y’know, meeting them head-on, charging into ‘em like a bull—that’s how we grow as people.” – Rick

3. “Have fun with empowerment. It seems to make everyone that gets it really happy.” – Rick

4. “Nobody exists on purpose. Nobody belongs anywhere. We’re all going to die. Come watch TV.” – Morty

5. “I think you have to think ahead and live in the moment.” – Rick

6. “How many of these are just horrible mistakes I made? I mean, maybe I’d stop making so many if I let myself learn from them.” – Morty

8. “Listen, Morty, I hate to break it to you, but what people call love is just a chemical reaction that compels animals to breed. It hits hard, Morty, then it slowly fades, leaving you stranded in a failing marriage. I did it. Your parents are gonna do it. Break the cycle, Morty. Rise above. Focus on science.” – Rick

9. “Don’t get drawn into the culture, Morty. Stealing stuff is about the stuff, not the stealing.” – Rick

11. “What, so everyone’s supposed to sleep every single night now? You realize that nighttime makes up half of all time?” – Rick

12. “Weddings are basically funerals with a cake.” – Rick

13. “You’re the little brother. You’re not the cause of your parents’ misery, you’re just a symptom of it.” – Summer

14. “You gotta do it for Grandpa, Morty. You gotta put these seeds inside your butt.” – Rick

15. “Sometimes science is more art than science. A lot of people don’t get that.” – Rick

16. “Listen, I’m not the nicest guy in the universe, because I’m the smartest, and being nice is something stupid people do to hedge their bets.” – Rick

Rick: “You’re still learning English? It’s the language you speak. How dumb are you?”

Thought-Provoking Rick and Morty Quotes to Reflect On

19. “Is evil real, and if so, can it be measured? Rhetorical question. The answer’s yes, you just have to be a genius.” – Rick

20. “Don’t make the same mistakes I made. Don’t deify the people who leave you.” – Beth

21. “I just want to go back to hell, where everyone thinks I’m smart and funny.” – Mr. Needful

22. “If I’ve learned one thing, it’s that before you get anywhere in life, you gotta stop listening to yourself.” – Jerry

23. “You’re down here bailing on the rest of us because you don’t want to process your grief and shame like a normal person, by drinking and mistreating others!” – Rick

24. “Camping is just being homeless without the change.” – Summer

25. “How do you feel about all the innocent people that are dying because of your choices?” – Jerry

26. “Because the thing about repairing, maintaining, and cleaning is it’s not an adventure. There’s no way to do it so wrong you might die. It’s just work. And the bottom line is, some people are okay going to work, and some people—well, some people would rather die. Each of us gets to choose.” – Dr. Wong

27. “Having a family doesn’t mean that you stop being an individual. You know the best thing you can do for the people that depend on you? Be honest with them, even if it means setting them free.” – Mr. Meeseeks

28. “You don’t love people in hopes of a reward, Dad. You love them unconditionally.” – Summer

29. “I realize now I’m attracted to you for the same reason I can’t be with you; you can’t change. And I have no problem with that but it clearly means I have a problem with myself.” – Unity

Rick and Morty Quotes to Learn More About the Series

31. “Lemme check my list of powers and weaknesses: ability to do anything, but only whenever I want.” – Rick

32. “I’ll tell you how I feel about school, Jerry: it’s a waste of time. Bunch of people running’ around bumping’ into each other, got a guy upfront saying, ‘two plus two,’ and the people in the back said, ‘four.’ Then the bell rings and they give you a carton of milk and a piece of paper that says you can go take a dump or somethin’. I mean, it’s not a place for smart people, Jerry. I know that’s not a popular opinion, but that’s my two cents on the issue.” – Rick

33. “Existence is a pain to a Meeseeks Jerry, and we will do anything to alleviate that pain.” – Mr. Meeseeks

34. “My life has been a lie—God is dead. The government’s lame! Thanksgiving is about killing Indians!” – Morty

35. “Gaslighting doesn’t exist, you made it up because you’re f*cking crazy.” – Morty

37. “Now, listen—I know the two of you are very different from each other in a lot of ways, but you have to understand that as far as Grandpa’s concerned, you’re both pieces of sh*t!” – Rick

38. “You and Unity are like—like leggings and mid-calf boots. You think you’re great together, but you’re just bringing out the worst in each other.” – Summer

More Rick and Morty Quotes for Those Who Enjoyed the Series

42. “You ever heard about Wall Street, Morty? You know what those guys do in their fancy boardrooms? They take their balls and they dip them in cocaine and wipe them all over each other.” – Rick

43. “I don’t like it here, Morty. I can’t abide by bureaucracy. I don’t like being told where to go and what to do. I consider it a violation. Did you get those seeds all the way up your butt?” – Rick

44. “I’m a scientist; because I invent, transform, create, and destroy for a living, and when I don’t like something about the world, I change it.” – Rick

45. “The world is full of idiots who don’t understand what’s important! And they’ll try to tear us apart, Morty!” – Rick

46. “Honey, stop raising your father’s cholesterol so you can take a hot funeral selfie.” – Beth

47. “Mr. President, if I’ve learned one thing today, it’s that sometimes you have to not give a f*ck!” – Morty

48. “It’s society. They work for each other, Morty. They pay each other. They buy houses. They get married and make children that replace them when they get too old to make power.” – Rick

How Did Rick and Morty Affect the Way You View Life?

At first glance, Rick and Morty may appear to be a silly show made only for entertainment purposes. But, if you’re a die-hard fan, you’ll know it has intricate layers and is incredibly insightful—discussing even the most sensitive life issues.

Rick and Morty enjoys playing with philosophy. Throughout the many seasons, it was able to intricately describe and show us the meaning of life, how vast the universe is, and how insignificant we are in comparison.

For many people, the idea that we were not created for a specific purpose can be soul-crushing. But, for Rick and Morty, this is simply how life is and has always been. Their message to all of us is to stop searching for a higher purpose because we’re all going to die in the end—and instead focus on what makes us happy.

We hope you were able to learn a thing or two about love and life through this collection. Make sure you keep the lessons you’ve learned from the list in mind the next time you watch this series!

So, did you enjoy reading our collection? Which quote is your favorite? Leave a comment down below.