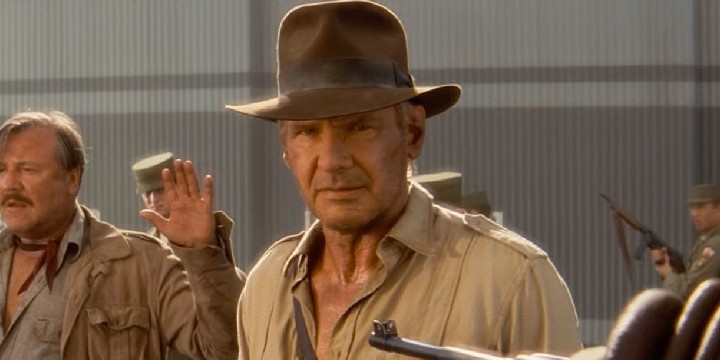 Explore the world’s hidden wonders through this list of the most memorable Indiana Jones quotes.

Indiana Jones is a media franchise based on the adventures of a fictional archeology professor.

It started with the movie, Raiders of the Lost Ark, followed by The Temple of Doom, The Last Crusade, and lastly, The Kingdom of the Crystal Skull.

All four movies are action-packed and follow a great storyline, and we’re sure the fifth installment will, too!

Viewers are kept on the edge of their seats by its mysteries and quest to uncover hidden secrets.

For sure, you’ll be inspired by Indiana’s drive to discover something new and do the impossible!

If you’re excited about the next movie, you might want to check out this collection of the best quotes from the first four installments. Don’t miss out on the list below!

And make sure to check out these Jurassic Park quotes and Lord of the Rings quotes.

2. “If you want to be a good archeologist, you gotta get out of the library!” – Indiana Jones

3. “Archaeology is the search for fact—not truth.” – Henry Jones

4. “We do not follow maps to buried treasure, and X never, ever marks the spot.” – Indiana Jones

7. “And in this sort of race, there’s no silver medal for finishing second.” – Henry Jones

8. “You want to talk to God? Let’s go see him together. I’ve got nothing better to do.” – Indiana Jones

13. “Germany has declared war on the Jones boys.” – Walter Donovan

Indiana Jones: “That’s why they call it the jungle, sweetheart.”

16. “Professor of archeology, an expert on the occult, and how does one say it? Obtainer of rare antiquities.” – Major Eaton

19. “I think it’s time to ask yourself; what do you believe in?” – Walter Donovan

20. “So once again, Jones, what was briefly yours is now mine.” – Rene Belloq

21. “It was just the two of us, Dad. That was a lonely way to grow up, lonely for both of us. I can remember the last time we had a drink together; I had a milkshake. But we didn’t talk; we’ve never talked. If you’d been an average and regular father, like all of my friends’ dads, you would’ve understood.” – Indiana Jones

22. “What you taught me is that I was less important to you than people who’ve been dead for 500 years in another country. And I learned it so well that we’ve hardly spoken for 20 years.” – Indiana Jones

23. Marion Ravenwood: “I’m sure I wasn’t the only one moving on with my life, there must have been plenty of women for you over the years.”

Indiana Jones: “There were a few. But they all had the same problem.”

Indiana Jones: “They weren’t you, honey.”

24. “I always knew someday you’d come walking back through my door. I never doubted that. Something made it inevitable.” – Marion Ravenwood

25. “This site also demonstrates one of the great dangers of archaeology; not to life and limb, although that does sometimes take place. I’m talking about folklore.” – Indiana Jones

26. “You and I are very much alike. Archeology is our religion, yet we have both fallen from the pure faith. Our methods have not differed as much as you pretend. I am but a shadowy reflection of you. It would take only a nudge to make you like me. To push you out of the light.” – Rene Belloq

27. “The search for the Grail is not about archaeology. If captured by the Nazis, the armies of evil will march across the face of the earth!” – Henry Jones

28. “What a fitting end to your life’s pursuits. You’re about to become a permanent addition to this archaeological find. Who knows? In a thousand years, even you may be worth something.” – Rene Belloq

29. Indiana Jones: “Take this. Wave it at anything that slithers.”

Marion Ravenwood: “Thanks. Oh, my God! This whole place is slithering!”

30. “The Ark. If it is there at Tanis, then it is something that man was not meant to disturb. Death has always surrounded it. It is not of this Earth.” – Sallah Mohammed Faisel el-Kahir

31. “He’s got a two-day head start on you, which is more than he needs. Brody’s got friends in every town and village from here to Sudan. He speaks a dozen languages and knows every local custom. He’ll blend in, disappear, and you’ll never see him again. With any luck, he’s got the grail already.” – Indiana Jones

33. “Indiana Jones, this is one night you’ll never forget. This is the night I slipped right through your fingers. Sleep tight and pleasant dreams. I could’ve been your greatest adventure.” – Willie Scott

34. Willie Scott: “There are two dead people out here!”

35. “Choose wisely, for while the true Grail will bring you life, the false Grail will take it from you.” – Grail Knight

36. “The Bible speaks of the Ark leveling mountains and laying waste in entire regions. An Army that carries the Ark before it—is invincible.” – Marcus Brody

37. Henry Jones: “Those people are trying to kill us!”

Henry Jones: “This is a new experience for me.”

Indiana Jones: “It happens to me all the time.”

38. “I suddenly remembered my Charlemagne. ‘Let your armies be the rocks and the trees and the birds in the sky—.’” – Indiana Jones

39. “Take this diary to the Reichsmuseum in Berlin. It will show them our progress, ahead of schedule. Without the map, I’m afraid it’s no better than a souvenir.” – Walter Donovan

Also read: Harry Potter Quotes, Back to the Future Quotes

Humorous Indiana Jones Quotes to Brighten Up Your Day

40. “Are you trying to develop a sense of humor or am I going deaf?” – Indiana Jones

Indiana Jones: “That’s usually when the ground falls out from beneath your feet.”

42. Rene Belloq: “Where shall I find a new adversary so close to my own level?”

43. Willie Scott: “Well, I always thought that archaeologists were always funny-looking men going around looking for their mommies.”

Henry Jones: “She talks in her sleep.”

47. “You Americans, you’re all the same. Always overdressing for the wrong occasions.” – Arnold Toht

Iconic Indiana Jones Quotes for Everyone Who Enjoyed the Franchise

51. “Half the German army’s on our tail, and you want me to go to Berlin?” – Indiana Jones

53. “Sorry about the head but I thought that you were one of them.” – Henry Jones

Did These Quotes Ignite Your Passion for Starting a New Adventure?

Exploration is the best way to learn new things and open up new opportunities in life. Like Indiana Jones, he followed his love and passion for adventure and discovering new things. He never limited himself to what his eyes could see and instead went above and beyond what we think is the limit.

Through Indiana Jones, we learn to believe that nothing is impossible. After all, we live in a world filled with infinite possibilities and beautiful opportunities. More than that, we’re surrounded by the wonders of history and the past tales our ancestors left for us to uncover.

Everything we want to know is just around us, waiting for us to discover it. So, don’t hesitate to take a step outside your comfort zone, and just like Indiana Jones, don’t be afraid to go out and explore the world! Open your eyes and grab every opportunity that life throws your way.

Did these quotes inspire you to start learning new things? Did you enjoy this collection? Share your thoughts by joining the discussion below.