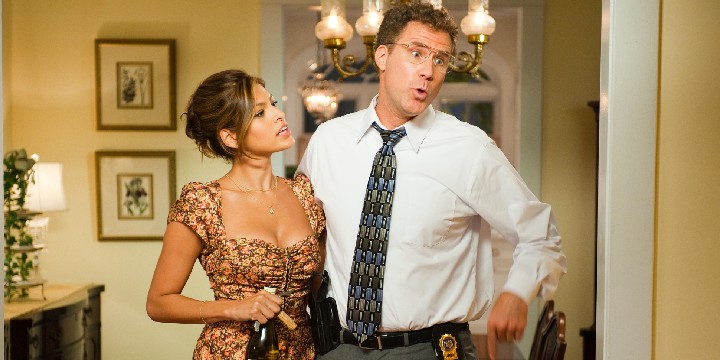 If you need some good jokes that will boost your mood, then fill your belly with laughter by reading this collection of The Other Guys quotes.

The Other Guys is an action-filled comedy movie starring Will Ferrell and Mark Wahlberg.

The plot revolves around the lives of Allen Gamble, a gentle forensic accountant, and Terry Hoitz, an impatient detective.

Both Allen and Terry are outcasts of the New York City Police Department due to their past mistakes.

But, by solving the case assigned to them, they prove themselves as heroes who can make an actual difference in the world.

There is a lot of action and hilarious lines in the movie, which undoubtedly made it loved by people all across the globe.

Moreover, behind all the humor are some pretty practical and helpful life lessons.

So, let these The Other Guys quotes provide you with your daily dose of advice and laughter for today!

And make sure to read these 21 Jump Street quotes and Anchorman quotes.

Best The Other Guys Quotes

2. “You keep hiding from stuff in the world, and eventually, the world comes to your front door.” – Terry Hoitz

4. “One day, I’ll get you over that wall of anger, and it will be glorious!” – Allen Gamble

6. “It’s the code. I’m your partner. I’m here to support a friend and a work colleague.” – Allen Gamble

7. “I think we all experienced our own ballet here tonight. A ballet of emotion and feelings.” – Allen Gamble

8. “I think the best way to tell the story is by starting at the end, briefly, then going back to the beginning, and then periodically returning to the end, maybe giving different characters’ perspectives throughout.” – David Ershon

9. Allen Gamble: “I’m so tired of you getting angry, and yelling all the time. It’s exhausting. I feel like I’m partners with the Hulk.”

Terry Hoitz: “You want to know why I’m so angry all the time? Because the more I try to do right, the more I screw things up.”

Short The Other Guys Quotes That’ll Always Be Memorable

10. “You have the right to remain silent, but I want to hear you scream!” – P.K. Highsmith

15. “Hey! Shake your dicks. This pissing contest is over.” – Captain Gene Mauch

16. “Why do you say it like it’s a predetermined thing?” – Allen Gamble

17. “I was so drunk, I thought a tube of toothpaste was astronaut food.” – Allen Gamble

18. “I just want to go somewhere and breastfeed!” – Allen Gamble

The Other Guys Quotes to Make You Feel Emotional

23. “Put on a little jacket, you go, you take your lunch ’cause you have big boy pants on? You got your big boy pants and your snack? I can say big loud things! I can be demonstrative!” – Allen Gamble

Terry Hoitz: “Really? The only thing I had to be proud of in my life was being a detective. That’s all I had. Now, it’s gone.”

26. “Sheila says she doesn’t know what happened, but she wants you back.” – Mama Ramos

Allen Gamble: “Did you hear what I said?”

Terry Hoitz: “Fine, I kind of missed you too.”

Funny The Other Guys Quotes

28. “Got a couple of tips, help you guys stay out of jail. One: try your hardest to not be Black or Hispanic.” – Fosse

Terry Hoitz: “I come here when I have lady troubles, which means I come here every night.”

33. “These braised short ribs taste like a dog’s *sshole. What kind of woman would slow-roast a dog’s *sshole and serve it to her husband?” – Allen Gamble

34. “I don’t know what you two have been up to, but I’ve been getting calls from people I don’t ever get calls from. In the 40 years I’ve been enforcing the law, I’ve learned one thing: when that happens, stop.” – Captain Gene Mauch

35. “In New York City, there’s a fine line between law and chaos. On that line live Danson and Highsmith.” – Narrator

Terry Hoitz: “We used to do those dance moves to make fun of guys when we were kids to show them how weird they were, okay.”

Allen Gamble: “You learned to dance like that sarcastically?”

The Other Guys Quotes That Expose the Humor of Cops

37. “You turned my beautiful Prius into a nightmare!” – Allen Gamble

Hal: “I would rather be a bear-dog, half bear, half dog. Because that way, I would live in the house, but I still get to make a doody in the woods!”

Terry Hoitz: “Come on, Allen, we both know it’s wooden.”

Allen Gamble: “Apartment pop! Now, get in the car.”

Allen Gamble: “Okay, I’ll be honest. This is only the second time I’ve ever fired this.”

Terry Hoitz: “So stop pointing it at me!”

40. Terry Hoitz: “Guess where we just came from? An explosion at your accounting office.”

Terry Hoitz: “Gas leak? The only gas leak is the one coming out of your mouth right now.”

Allen Gamble: “Are you serious?”

Terry Hoitz: “They sound like a baby blowing out birthday candles.”

Hilarious The Other Guys Quotes That Will Make You Laugh

42. “I never actually put my foot all the way down to the ground with the accelerator like that. It got me slightly aroused.” – Allen Gamble

43. Allen Gamble: “God, this water is good. Terry, have you tried the water?”

45. Allen Gamble: “I didn’t need you to stick up for me, okay? I could’ve handled that myself.”

Terry Hoitz: “Hey, don’t flatter yourself. It’s the partners’ code. I had no choice.”

Francine: “I’m dancing, Terry. What the hell are you doing here?”

Terry Hoitz: “I love you, Francine. If you were with me, you wouldn’t be here.”

Francine: “This is a ballet studio, Terry, okay? These poles are horizontal.”

Allen Gamble: “Whose baby is that? Who’s the man who did that to you?”

48. “Cops still argue to this day why Danson and Highsmith jumped. Maybe it was just pride, having survived so many brushes with death. Maybe their egos pushed them off. I don’t know. But that sh*t was crazy. Either way, there was a hole in New York City, and it needed to be filled.” – Narrator

49. “Captain, you really want to disarm this guy? Take out the batteries in the calculator.” – Terry Hoitz

50. “There are three things I love in this world: Kylie Minogue, small dimples just above a woman’s buttocks, and the fear in a man’s eye who knows I’m about to hurt him.” – Roger Wesley

51. “I don’t like you. I think you’re a fake cop. The sound of your piss hitting the urinal, it sounds feminine. If you were in the wild, I would attack you, even if you weren’t in my food chain. I would go out of my way to attack you. If I were a lion and you were a tuna, I would swim out in the middle of the ocean and freaking eat you, and then I’d bang your tuna girlfriend.” – Terry Hoitz

52. “At age 11, I audited my parents. Believe me, there were some discrepancies, and I was grounded.” – Allen Gamble

53. “Hey, Andrew Lloyd Webber, the jig is up, okay? We know it wasn’t your security team that grabbed you. And we know you’re targeting a big fish to cover losses. You talk, or I beat you, so it don’t show no bruises.” – Terry Hoitz

54. “I can’t hear! I can’t hear! There are blood blisters on my hands! Oh, my God! How do they walk away in a movie without flinching when it explodes behind them? There’s no way! I call bullshit on that! When they flew the Millennium Falcon out of the Death Star, and it was followed by the explosion. That was bullshit!” – Allen Gamble

Allen Gamble: “No, he won’t. He’s just using a hyperbole, but that’s a really weird example.”

56. “We’ve developed a system to establish a beach-head and aggressively hunt you and your family, and we will corner your pride, your children, your offspring.” – Allen Gamble

More The Other Guys Quotes That You Will Love

57. “Okay, first off, a lion swimming in the ocean? Lions don’t like water. If you’d placed it near a river or some sort of fresh water source, that’d make sense. But you find yourself in the ocean, 20-foot waves, I’m assuming it’s off the coast of South Africa, coming up against a full-grown, 800-pound tuna with his 20 or 30 friends? You lose that battle. You lose that battle 9 times out of 10. And guess what? You’ve wandered into our school of tuna, and we now have a taste of lion. We’ve talked to ourselves. We’ve communicated.” – Allen Gamble

59. “All the gunfights, all the car chases, all the sex we don’t want to have with women, but we have to is all due to what you guys do.” – P.K. Highsmith

60. “We will construct a series of breathing apparatus with kelp. We will be able to trap certain amounts of oxygen. It’s not gonna be days at a time, but an hour, hour 45, no problem. That will give us enough time to figure out where you live, go back to the sea, get more oxygen, and then stalk you. You just lost at your own game. You’re outgunned and outmanned.” – Allen Gamble

Which of These The Other Guys Quotes Made You Laugh Hard?

The Other Guys might not be a satire or mockumentary movie. But, with the hilarious mannerisms and attitude of the characters, it is still definitely worth watching. It offers a fresh angle of comedy that few of us get to explore.

Being a cop is a dangerous and serious career path. But, the movie took on a more comedic approach to entertain us with the protagonists’ gripping action and dry jokes. With Will Ferrell and Mark Wahlberg, who are both veteran comedy actors, we are surely presented with a good dose of police comedy.

We all know how our police officers are the modern-day superheroes that inspire many of us to do good. But, we also must remember that they are just people who make mistakes and have flaws. Funnily, The Other Guys exposes the humane and weak sides of cops that will make you see them in a whole new light.

Hopefully, these quotes were able to cheer you up today. Make a mental note of your favorites whenever you find yourself in need of a good laugh.

Which The Other Guys quote did you love most? Do you have more quotes to add? Comment below!