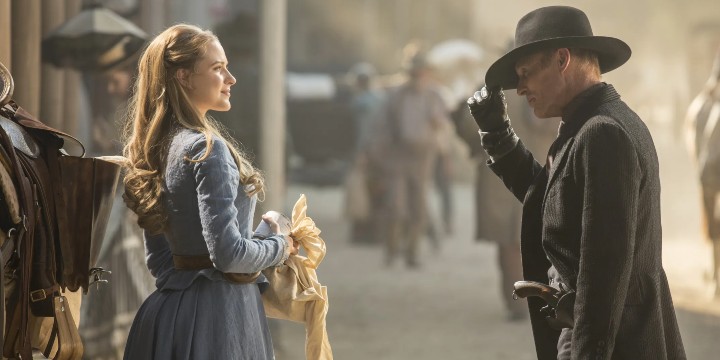 If you’re into sci-fi and want to test the limits of your imagination, then this list of Westworld quotes is for you.

Westworld is an American sci-fi and dystopian TV series produced and aired by HBO. Its amazing and unique storyline was based on a movie of the same title released in 1973.

Throughout its many episodes, we’re taken on a one-of-a-kind experience that gives us a glimpse of what our consciousness and mind can achieve.

In the series, Westworld is an exclusive theme park for those who have more than enough money to spare.

If you’re wealthy enough, then, through Westworld, you’re given the power to explore what your mind is capable of. Ultimately, it gives you the chance to live a life without limits.

Having the power to live without anything holding you back is tempting to achieve.

But, we must also remember that everything comes with a price—and sometimes, this price might be something we would not be willing to pay.

Indeed, Westworld is a show that makes us think deeply about humanity and our capabilities.

If you’re curious to know more about what Westworld has to offer, then make sure you check our complete list below.

And don’t forget to check out these True Detective quotes and Euphoria quotes.

1. “Humanity’s biggest threat has always been itself.” – Engerraund Serac

2. “I used to think this place was all about pandering to your baser instincts. Now I understand. It doesn’t cater to your lowest self, it reveals your deepest self. It shows you who you really are.” – Man in Black

3. “Humans created the idea of heaven and hell to cow simple-minded people into compliance. They are lies.” – Engerraund Serac

4. “You live only as long as the last person who remembers you.” – Akecheta

5. “It’s a difficult thing—realizing your entire life is some hideous fiction.” – Maeve Millay

6. “Something that is truly free would need to be able to question its fundamental drives, to change them.” – Robert Ford

7. “It’s not about who you are. It’s about who they’ll let you become.” – Dolores Abernathy

8. “Have you ever questioned the nature of your reality? Did you ever stop to wonder about your actions? The price you’d have to pay if there was a reckoning? That reckoning is here.” – Dolores Abernathy

9. “You wanted to live forever? Be careful what you wish for.” – Dolores Abernathy

10. “Some say you destroy your enemy by making them your friend. I’m more of a literal person.” – Karl Strand

11. “The only thing wrong with the seven deadly sins is that there aren’t more of them.” – Maeve Millay

12. “If you can’t tell the difference, does it matter if I’m real or not?” – Annie McCain Engman

13. “The game begins where you end and ends where you began.” – Robert Ford

14. “I guess people like to read about the things that they want the most and experience the least.” – Bernard Lowe

16. “Everything in this world is magic, except to the magician.” – Robert Ford

17. “Someday sounds a lot like the thing people say when they actually mean never.” – Dolores Abernathy

18. “We speak the right words. Then we create life itself out of chaos.” – Robert Ford

19. “Some things are too precious to lose. Even to be free.” – Maeve Millay

20. “We each deserve to choose our fate. Even if that fate is death.” – Maeve Millay

Westworld Quotes to Inspire You

21. “Consciousness isn’t a journey upward, but a journey inward. Not a pyramid, but a maze.” – Bernard Lowe

22. “Your mind is a walled garden, even death cannot touch the flowers blooming there.” – Robert Ford

23. “Dreams mean everything. They’re the stories we tell ourselves of what could be, who we could become.” – Robert Ford

24. “All my life, I’ve prided myself on being a survivor. But surviving is just another loop.” – Maeve Millay

26. “I believed that stories helped us to ennoble ourselves, to fix what was broken in us, and to help us become the people we dreamed of being. Lies that told a deeper truth.” – Robert Ford

27. “The right information at the right time is deadlier than any weapon.” – Martin Connells

28. “Winning doesn’t mean anything unless someone else loses.” – Man in Black

30. “What humans describe as sane is a narrow range of behaviors. Most states of consciousness are insane.” – Bernard Lowe

31. “Every game has its rules. We just need to know how to break them.” – Maeve Millay

32. “No matter how dirty the business, do it well.” – Hector Escaton

33. “Divine gift does not come from a higher power, but from our own minds.” – Robert Ford

Meaningful Westworld Quotes That Zoom in on Humanity

34. “If there’s one thing I know about human nature, it’s that your stupidity is only eclipsed by your laziness.” – Maeve Millay

35. “We can’t define consciousness because consciousness does not exist. Humans fancy that there’s something special about the way we perceive the world, and yet we live in loops as tight and as closed as the hosts do, seldom questioning our choices, content, for the most part, to be told what to do next.” – Robert Ford

36. “We humans are alone in this world for a reason. We murdered and butchered anything that challenged our primacy.” – Robert Ford

37. “Humanity is a thin layer of bacteria on a ball of mud hurtling through the void. I think if there was a god, he would’ve given up on us long ago. He gave us a paradise, and we used everything up. We dug up every ounce of energy and burned it. We consume and excrete, use and destroy. Then we sit here on a neat little pile of ashes, having squeezed anything of value out of this planet, and we ask ourselves, ‘Why are we here?’” – Man in Black

Short Westworld Quotes to Give You Profound Insights

38. “Patience is the most overrated virtue.” – Engerraund Serac

39. “Real love is always worth waiting for.” – Clementine Pennyfeather

41. “We are all bound together—the living and the damned.” – Akecheta

42. “Tell me the truth. Tell me one true thing.” – Juliet Westworld

44. “There’s a path for everyone.” – Dolores Abernathy

45. “Hell is empty and all devils are here.” – Peter Abernathy

46. “Time undoes even the mightiest of creatures.” – Dolores Abernathy

47. “That which is real is irreplaceable.” – Dolores Abernathy

50. “An old friend once told me something that gave me great comfort. Something he had read. He said that Mozart, Beethoven, and Chopin never died. They simply became music.” – Robert Ford

51. “Take me to the place you promised. Take me to where the mountains meet the sea.” – Dolores Abernathy

53. “I understand now. This world doesn’t belong to them; it belongs to us.” – Dolores Abernathy

55. “Someone once told me that there’s a path for everyone. And my path leads me back to you.” – Teddy Flood

56. “You can’t play God without being acquainted with the Devil.” – Robert Ford

57. “I’ve known you my whole life. Where we go, we go eyes open—together.” – TeddyFlood

58. “Not real? But what about me? My dreams? My thoughts? My body? Are they not real? And what if I took these unreal fingers and used them to decorate the walls with your outsized personality? Would that be real?” – Maeve Millay

Westworld Quotes for Everyone Who Loved the Series

59. “This whole world is a story. I’ve read every page except the last one. I need to find out how it ends. I want to know what this all means.” – Man in Black

60. “Didn’t matter who they said they were, who they thought they were. We saw underneath all that. We saw inside them down to the core.” – Man in Black

61. “I will have such revenges on you both. What they are, yet I know not. But they shall be the terrors of the earth.” – Peter Abernathy

62. “The longer I work here, the more I think I understand the Hosts. It’s the human beings that confuse me.” – Bernard Lowe

63. “You never really understood. We were designed to survive. That’s why you built us—you hoped to pour your minds into our form. While your species craves death. You need it. It’s the only way you can renew. The only way you ever inched forward. Your kind likes to pretend there is some poetry in it but that really is pathetic. But that’s what you want, isn’t it? To destroy yourself. But I won’t give you that peace.” – Dolores Abernathy

64. “I read a theory once that the human intellect was like peacock feathers. Just an extravagant display intended to attract a mate. All of art, literature, a bit of Mozart, William Shakespeare, Michelangelo, and the Empire State Building. Just an elaborate mating ritual.” – Robert Ford

Akecheta: “Take mine in its place.”

66. “It’s tribal. They use plumage to identify themselves, which makes them easily fooled.” – Dolores Abernathy

67. “Death is an old amigo of mine. I died just recently, in fact. But death can’t bear to lay claim on me. So it sent me back here to do its bidding. Because I, I do it with such goddamn style.” – Major Craddock

68. “Every human relationship can be adjusted with the right amount of money.” – Solomon

69. “There are a lot of things that you can fake in this world. Most people don’t want to see the predator inside.” – Charlotte Hale

70. “You were free. You had no god. But you tried to build one. Only that thing you built isn’t God. The real gods are coming. And they’re very angry.” – Dolores Abernathy

How Far Would You Go to Achieve What You Desire?

Ever since the first episode came out, Westworld has been the talk of the town. There have been many controversies linked to the show. However, it was ultimately well-received because of its complex and profound life lessons.

In Westworld, we can see just how great our mind’s power is. On the flip side, we also get a glimpse of how destructive it could be if used to the extreme—or if used for bad intentions. More than that, it’s a show that delves into many philosophical topics, theories, and questions.

Humanity is the main foundation of Westworld. In the show, they talk about human emotions and how they drive us to act and choose what our future would entail. The show also discusses some concepts that relate to self-actualization and the very foundation of human desire.

There’s no denying that Westworld is jam-packed with exciting topics that all deep thinkers and sci-fi lovers will enjoy! Make sure you watch out for other meaningful lessons the next time you re-watch the episodes on your favorite streaming sites!

What other lessons did you get from the list? Which quote made you want to start watching from the first episode? Share your thoughts below.