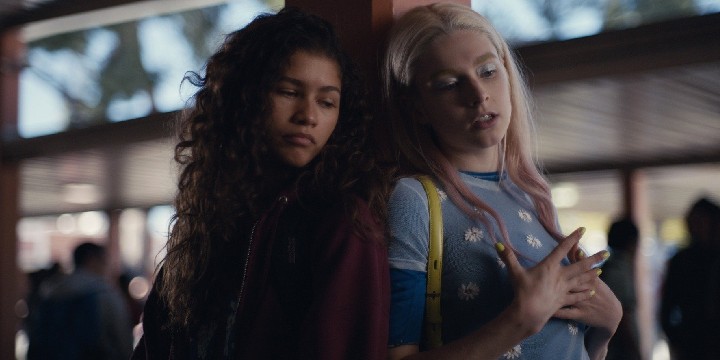 Take a deeper look at people’s undiscussed struggles in life from these insightful Euphoria quotes.

Euphoria is an American drama series produced by Sam Levinson based on an Israeli show of the same name. The plot revolves around the experiences of high school students in navigating relationships, trauma, sex, and addiction in their lives.

Although the series can be heavy, it is an honest and raw portrayal of serious issues that must be discussed. With the second season’s release, people are slowly opening conversations about the hardships that the characters go through. So, don’t miss out on our collection below that contains the best quotes from the two seasons of the Euphoria series.

And make sure to check out these Shameless quotes and Schitt’s Creek quotes.

1. “If I could be a different person, I promise you, I would. Not because I want it, but because they do.” – Rue Bennett

2. “Every time I feel good, I think it will last forever, but it doesn’t.” – Rue Bennett

4. “Will I ever be anything else than a collection of every bad thing I’ve ever done?” – Rue Bennett

5. “You said memories exist outside of time and have no beginning or end.” – Rue Bennett

6. “You’ve got to believe in poetry because everything else in your life will fail you, including yourself.” – Ali

7. “My whole life, I’ve been working towards this one thing: going pro, being the greatest. And for as long as I can remember, I thought that was actually possible.” – Christopher McKay

8. “The other thing about depression is it kind of collapses time. Suddenly, you find your whole days blending together to create one endless suffocating loop. So you find yourself trying to remember the things that made you happy.” – Rue Bennett

9. “I just showed up without a map or a compass, and at some point, you have to make a choice about who you are and what you want, and therein lies the catch.” – Rue Bennett

10. “It’s not even the lies that hurt, you know? It’s the fact that you’re never really emotionally prepared for someone to leave you.” – Rue Bennett

11. “You realize they’re all just f*cked up too and lost. They just have a reason to mask it.” – Rue Bennett

12. “Real love is when you can’t exist without someone. When you’d rather die than be apart, and the whole world goes dark, and nothing else matters but the person standing in front of you.” – Rue Bennett

13. “That it’s about balance, stability. The need to organize her feelings and thoughts, so she can breathe easier.” – Leslie Bennett

15. “When you’re younger, everything feels so permanent. But as you get older, everyone drifts away.” – Rue Bennett

18. “I keep making mistakes and not learning from them.” – Cassie Howard

19. “There’s nothing more powerful than a fat girl who doesn’t give a f*ck.” – Kat Hernandez

20. “You guys can judge me if you want, but I do not care! I have never ever been happier!” – Cassie Howard

21. “Maybe people are nostalgic about high school ’cause it’s like the last time in their life that they get to dream.” – Cassie Howard

22. “I mean, I’m all good with drugs until guns start coming out.” – Rue Bennett

23. “I liked the way I dressed you, but I’m worried I f*cked with your gender expression.” – Jules Vaughn

24. “There is not a thing on the planet earth that compares to fentanyl, except Jules. Jules is a close second.” – Rue Bennett

Jules Vaughn: “If I could, I’d burn it to the f*cking ground.”

Rue Bennett: “And salt the earth behind you.”

28. “The beautiful thing about getting high is that time ceases to exist.” – Rue Bennett

30. “You’re abusive, psychopathic. Most of the time, I really hate the way you make me feel.” – Maddy Perez

Short Euphoria Quotes to Think About

32. “All I know is life is not a Nicholas Sparks novel.” – Rue Bennett

34. “It may seem all cute and cuddly to you, but this is real sh*t.” – Christopher McKay

36. “I admire whatever it took. I just hope it didn’t teach you the wrong lesson.” – Cal Jacobs

38. “No room for heteronormativity in here.” – Jules Vaughn

Also read: This Is Us Quotes, The Vampire Diaries Quotes

Euphoria Quotes That Speak the Truth About Love

39. “I feel like love is super dark, and no one ever talks about it.” – Cassie Howard

40. “You are my everything. Any moment with you is my favorite.” – Rue Bennett

41. “I’ll never find that kind of love. There’s just no darkness. It’s just sweet. I don’t know if that would ever be enough for me.” – Rue Bennett

44. “Sometimes two people in the universe who aren’t meant for each other find each other.” – Cal Jacobs

45. “It wasn’t the violence that scared her. It was the fact that she knew no matter what she did, she’d still love him.” – Rue Bennett

46. “And although she had never been in a relationship, or even in, like, love, she imagined spending the rest of her life with her.” – Rue Bennett

47. “She fell in love with every guy she ever dated.” – Rue Bennett

48. “At night, I fall asleep to you, and in the morning, I wake up to you. I kind of feel closer to you than I do anyone in the world.” – Nate Jacobs

49. “I wish you could see yourself the way the rest of the world does.” – Jules Vaughn

50. “She’s basically the most wonderful f*cking person on the planet.” – Rue Bennett

Emotional Euphoria Quotes to Revisit the Show’s Most Heartbreaking Scenes

53. “The absolute worst part of depression is that even though you know you’re depressed, you’re unable to stop yourself from getting worse.” – Rue Bennett

54. “Because you’re so broken, you don’t even trust yourself. And that’s scary.” – Nate Jacobs

55. “I feel like her sobriety is completely dependent on how available I am to her.” – Jules Vaughn

56. “I feel like I’ve framed my entire womanhood around men.” – Jules Vaughn

57. “She hated her life, not because it was bad, but because when you hate your brain and your body, it’s hard to enjoy the rest.” – Rue Bennett

58. “You know when you’re with someone, and things just aren’t right, but you’re afraid to ask because the answer might be worse than the feeling right now?” – Rue Bennett

59. “I guess I just wanted to hurt you as much as I imagined you’d hurt me.” – Kat Hernandez

60. “But slowly, your brain begins to erase every memory that ever brought you joy. And eventually, all you can think about is how life has always been this way. And will only continue to be this way.” – Rue Bennett

61. “I’m envious of your generation, you know. You guys don’t care as much about the rules. You know, I think that’s a good thing. And I don’t want to be that old guy that gives you advice, but I look at you, and I think there are two versions of how your life can go. You can either go someplace where you’re wanted for who you are. Or you can stay in a town like this. End up like me. Living your life out in motel rooms. Selfishly, I hope you stay.” – Cal Jacobs

63. “You know I spent my whole life trying to keep this part of me separate. But I feel like it’s poisoned everything. I thought that I was doing what was best for everybody. And then, I look at my boys, and they have so much anger. Not just anger but rage and it scares me.” – Cal Jacobs

Euphoria Quotes That Open the Discussion About Addiction and Sobriety

64. “To tell you the truth, drugs are probably the only reason I haven’t killed myself.” – Rue Bennett

65. “I, uh, I once took, like, 10 Vicodin, and drank an entire thing of tequila, and then, I, like, blacked out for three days. But while I was blacked out, I, like, still went to school and did homework and sh*t. It was really weird.” – Rue Bennett

66. “I know you’re not allowed to say, but drugs are kind of cool. I mean, they’re cool before they wreck your skin and your life and your family. That’s when they get uncool. It’s actually a very narrow window of cool.” – Rue Bennett

67. “This is the feeling I have been searching for my entire life, for as long as I could remember. Because suddenly, the world went quiet, and I felt safe in my own head.” – Rue Bennett

68. “You know that drug addicts don’t reach out for help unless there are no options.” – Ali

69. “And over time, all I ever wanted was those two seconds of nothingness.” – Rue Bennett

70. “I don’t know what kind of f*cked up sh*t you got going inside of your head. I don’t know how to help, but I could tell you one thing, this drug sh*t, it’s not the answer.” – Fezco

71. “Some people say that the eyes are the windows to the soul. I disagree. I think it’s your dick.” – Rue Bennett

72. “The thought of having to stand up, exert 172 muscles each step for 35 feet, just so I can sit on cold porcelain and piss out toxins over and over again for the rest of my life makes the whole concept of living feel like one long, sadistic joke.” – Rue Bennett

73. “It’s so weird to think that, like, no matter what happens, the universe is just out here giving, like zero f*cks.” – Maddy Perez

74. “If I am bipolar, I sure as sh*t prefer mania over depression.” – Rue Bennett

More Euphoria Quotes for a Deeper Understanding of the Characters

75. “Honey, it’s just the way your brain was hardwired. Plenty of great, intelligent, funny, interesting, and creative people have struggled with the same things you struggle with.” – Leslie Bennett

76. “That’s the thing with guys like Nate. They don’t actually want a person. They want something they can own and possess.” – Rue Bennett

78. “I spent my whole life afraid people were going to find out that I was fat. But honestly, who gives a sh*t.” – Kat Hernandez

79. “You know, it’s one thing for my classmates to body-shame me, but for you, Principal Hayes, that’s just a whole other thing. It’s degrading. It’s discriminatory. And it just goes to show how insidious and systemic body terrorism truly is in this country.” – Kat Hernandez

80. “I don’t remember much between the ages of 8 and 12. Just that the world moved fast and my brain moved slow. And every now and then, if I focused too closely on the way I breathed, I’d die. Until every second of every day, you find yourself trying to outrun your anxiety.” – Rue Bennett

Have You Gone Through Similar Experiences as the Characters?

Addiction, sexuality, and mental health are all stigmatized issues in society. So, it is a surprisingly brave step how Euphoria shows the importance of talking about these topics in our lives.

Although some of us may think that we’re disconnected from the characters’ experiences, others see a reflection of their life in the show. Watching the series encourages people to start serious conversations with their loved ones. On top of that, we also learn the value of empathy for people who go through the same thing.

So, make sure to be kind to yourself and to others. Remember that your bad experiences don’t define who you are. Keep working on yourself and enjoy life!

Which Euphoria quote is your favorite? Do you have more quotes to add to the collection? Comment your answers below!