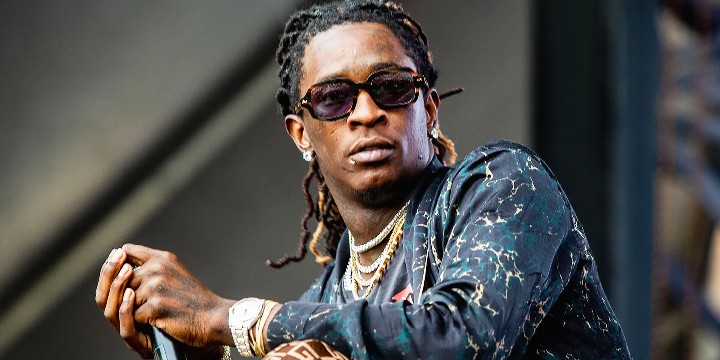 Read these Young Thug quotes that will teach you about rap and reaching success in life.

Young Thug is an American rapper who is known for influencing modern hip hop and trap music. He started his career in music in 2010 with his mixtape, I Came from Nothing.

He did not immediately rise to fame in his early works. But, through hard work, dedication, and creativity, he became one of the most famous and influential rappers.

Check out what he has to say about life and the music industry by reading the complete collection below.

And make sure to read these J. Cole quotes and Big Sean quotes.

4. “When you see them be successful, however small, you say to yourself, ‘Wow.’ And everything becomes possible. Never denigrate to say we will not succeed.”

5. “I always knew I could rap, and in a sense, I always rapped, and I’ve always behaved like a rapper.”

6. “I know that everybody listens to me, but only my true fans will go and buy my album.”

10. “You must not worry about leaks or pieces stolen on your computer. Just make songs. You gotta make music, keep stuff out. You may not know rap, but that’s how it works.”

11. “I know every time I get somewhere, it’ll be strange. But if I understand correctly, I also have fans here, and it reassures me.”

13. “An album is a project with which you have to hit hard.”

16. “I repeat it until it works. It is important to record. Otherwise, you lose ideas. That’s why I never stay away from the studio. I always have something to ask.”

18. “I don’t ever want to be like a peasant. I want to always be all right. But motivation is fans, not your kids, your mum, none of that. All of that matters, but number one is your fans.”

19. “This is the industry that wants music, the rap industry. You have to be on deck all the time, but you do not have the time to do the album. It is an energy. It must be present in everyday life.”

20. “I do not always listen again, but if something strikes me, I exploit it.”

21. “For a long time, I heard rap without paying attention, but it is still a way of life, even when you’re a kid.”

23. “I like everything that people say. No matter what they say. You gay, you a punk. You got a nice girlfriend. You’re ugly. You can’t rap. You’re the hardest.”

24. “Mixtapes, it’s for everyone, and you throw them in the trash quickly. While an album is an object that only your real fans take the trouble to buy and know you have prepared something special.”

25. “I feel like I started a lot of things. But I don’t try to downplay nobody’s career. I ain’t make their career. I just made a lot of people not be scared to be them. I just like to see people do what they want to do.”

Greatest Young Thug Quotes That Are Full of Meaning

26. “I’m the type of person to put myself in everybody else’s shoes.”

27. “The same image that I have of all the countries where I am supposed to go—it’s far, it’s different, it will be necessarily complicated.”

30. “A mixtape is for the street. It’s something you do without necessarily thinking about it because you have to stay in the game. It’s like writing an email saying hello to your friends.”

Young Thug Quotes on His Thoughts on Life

33. “Atlanta is the number one place to live. You live better. You eat better. The rides are better. Vehicles are better deals. It’s better people. More mean people, but at my level, you want it to be about business, so it’s perfect for me.”

34. “You need to stay up out them streets if you can’t take the heat ’cause it get cold like Minnesota.”

36. “All those who came out of my neighborhood before me. beyond those you see on TV, the most important people are those who are close to you because they share the same reality.”

38. “This is where the guys who copy me are planted—I do not use auto-tune, I sing. That’s my advice!”

39. “The reason why I moved from Young Thug to Jeffery was because I felt like I did a wrong turn.”

40. “It’s a pretty crazy thing in which I tried to make songs, real songs, not the quick stuff like on tape. A dose of Kendrick Lamar, a dose of J. Cole because it’s got to be an album that goes in the club.”

42. “I like in Kanye West confidence in him, but also his aggressiveness, ambition, and charisma.”

43. “I’d make a million songs with Game because we never had no real problem.”

44. “Wayne and Drake, it takes them so long to do a song. I understand why because they want it to be perfect. But I think I can do a perfect song in 10 minutes.”

46. “I know I have this image, but in reality, if you take all my records, I had to use five or six tracks.”

48. “It was Kanye West who spoke, and then we met and recorded some songs. After, you know what it is, we all bump like crazy.”

50. “It’s like, boom! I’ve got a girlfriend. It turned out to be a good thing because it made me a rapper.”

Young Thug Quotes About His Relationship With Other Rappers

53. “I spend more time with Gucci Mane or Birdman than 300, but all this is just family. Who cares about contracts?”

54. “I feel close to Kanye West. We’re friends. This is not just a working relationship.”

55. “Ain’t no problem with me and Kevin Gates. Everybody just trippin’.”

56. “I’m signed to Atlantic through 300 Entertainment Lyor Cohen’s label. That is my only contractual relationship.”

58. “I did a song in eight minutes. I thought everybody could write songs that fast. But working with a lot of them, they don’t.”

Young Thug Quotes About His Family and Childhood

62. “Today, I live in the suburbs in a neighborhood that’s not too bad.”

63. “It was stressful to live as a child in a Sylvan Hills. It’s always been complicated. Honestly, I do not really want to tell you, actually.”

65. “My dad wanted me to play football so bad, he took me to Washington High School on the west side of Atlanta because they were number one. They never lost.”

66. “Like, Jay-Z has some of the sickest lyrics ever, but I would never buy his CD, just because of my age and because of his age. By the time I turn that old, I ain’t gonna be doing what he’s doing.”

68. “If you feel that you can just come in the studio and freestyle on my song, then I’m ready to rap battle you. That’s just how I feel about it because I know I’m way harder than another rapper freestyling on my song.”

70. “Ninety percent of my clothes are women’s.”

Did These Young Thug Quotes Inspire You With His Creativity and Hard Work?

You may think that Young Thug is a violent and impolite man based on his name. But really, he is one of the coolest and most genuine, kind rappers who translates his memories and experiences into heartfelt music.

Sometimes, the world gets so competitive and violent that it changes our pure hearts. Young Thug reminds us that all that matters in life is loyalty and love. It is clear from how he talks about love, family, and community in his works that he is a good man with a creative mind.

These Young Thug quotes are only proof of his dedication to his work and love for his friends and family. We are lucky to have a man so admirable and inspirational to share his music with us. So, make sure you share his wise words with your family and friends!

Which Young Thug quote is your favorite? Do you like Young Thug’s songs? Comment your thoughts below!