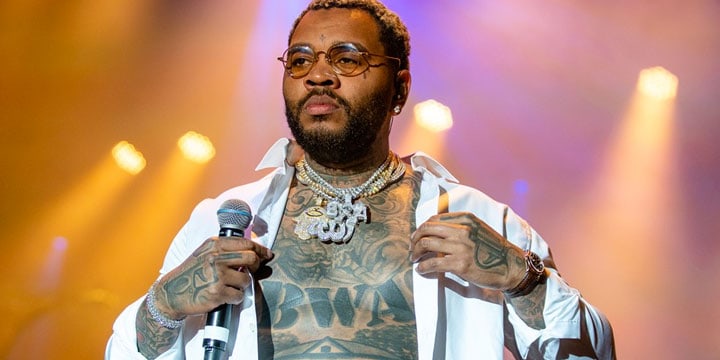 Let these Kevin Gates quotes show you how one can always stand up and try again, even after a fall.

Kevin Gates is an American artist and entrepreneur.

Throughout the world, he’s known for lyrics that delve into depression, life in prison, and poverty. By sharing parts of himself in his songs, he touches millions of people who listen to his music.

Growing up, Kevin Gates had it tough; he had negative influence from the people around him, and he was in and out of jail multiple times.

You may not be experiencing exactly the same things he did, but for sure, you’ve come across a difficulty or two in your life that significantly affected the path toward your dreams.

Kevin Gates is admirable because even though he faced many roadblocks, he did not let them shatter his dreams. Because of his perseverance and belief in himself, he’s now regarded as one of the most successful rappers in the United States.

If you want to be inspired by his experiences and words, then make sure you read through to the end. Learn a lot about life, success, music, and more through the list below.

And don’t forget to check out these Rod Wave quotes and Lil Durk quotes.

1. “Without an understanding of bad, how can one truly have an appreciation of good?”

2. “Anything lost, can be found again⁠—except for time wasted.”

3. “Wealth is not of the pocket. It’s of the heart. It’s of the mind. I live like that. You could give me a fish and feed more for a day, but if you teach me to fish, you’ve fed me forever. So that’s really my philosophy with it all.”

4. “Life is about conduct and how we conduct ourselves. But two wrongs never make a right.”

9. “I experience great hurt, this hurt allows me to know I’m alive.”

10. “If I told you I was different, would you understand the difference?”

11. “When you stand for something, you’ve got to stand for it all the way, not halfway.”

12. “Knowledge is provided but only to those who need to know.”

13. “If you associate yourself with peer pressure or complacency, you’re destined for failure.”

14. “Jail and the streets go hand in hand. You can’t have one without the other. They coincide.”

15. “Use the things that make you angry⁠⁠ as fuel to make you better.”

16. “I believe that life is a journey and for me to tell you my plans; things never go according to plan.”

17. “I don’t really like talking. I like to execute. I’m not a talking person. I’m an action person.”

18. “I have trust issues with allowing other individuals to know my innermost secrets for fear of how I may be viewed. Everyone has this.”

Short Kevin Gates Quotes That Are Full of Life Lessons

20. “Why accept failure when success is free?”

21. “You can’t make everybody else happy and still stay on top.”

26. “All things are obtained by wisdom and knowledge.”

27. “If it matters to you, pursue it aggressively.”

29. “Watch people daily and you will see their true colors.”

30. “Every time the leaves are changing, it’s the loneliest time of the year.”

Kevin Gates Quotes to Understand His Views on Love and Relationships

31. “You have to be intimate with a person to know that person.”

32. “The ones that hate you most tend to be the people you know.”

35. “I love God, I love everybody else around me as myself, and I love my enemy.”

36. “Some may consider this a problem—I easily fall in love.”

37. “Some’ll say life is a gamble, which means love is a casino. Everybody just playin’ to win.”

39. “To be honest, I am not looking to be romantic, already got someone at home.”

Kevin Gates Quotes to Motivate You

41. “My daily conversation—it consists of hustle. Grinding from the bottom, sick and tired of the struggle.”

42. “A vision without action is merely a dream. Action, it’s the grind, it’s the hustle, it’s the persistence.”

44. “I’m inspired by everything that goes on around me. I’m a sponge. I’m very analytical. I notice the things that most people don’t notice.”

45. “When you come up in the slums, having nothing makes you humble.”

46. “I can’t say any artist inspired me, because I’m inspired by the things that go on around me.”

49. “Out my window, I see everything I dream about and wished I had.”

50. “I came in the game with a different attitude than I have now. And I had to grow. I had to mature. In that growth and in that maturity, that point of maturity I realized that, ay, the people that interview me, we really only having a conversation. And they are not from the same walk of life that I am, so my life is super interesting to them.”

Kevin Gates Quotes That Will Push You Forward

52. “When trying to destroy you, they destroy themselves in the process. Fuck em’. Work harder!”

53. “It’s about really really being who you are as an individual and not apologizing for it, that’s what it is. I can feel the growth from my first mixtape to now. On every song, I want to give you a piece of who I am as an individual.”

55. “If I tell the truth about me, what can the world say? I’d love to be accepted, but I’m not seeking acceptance. If you are a fan, it’s because you’re a fan of who I am psychologically, emotionally, and individually. The world can relate to a human being more than it can relate to a superstar.”

56. “I don’t give anyone a reason to hate me, they create their own drama out of pure jealousy. Keep ears opened, mouth closed.”

57. “Or help them get to the root of the problem. Or help them find out what the problem is. Because the problem lies with self, and a lot of times we don’t look inward as individuals. We always look for something else as a substitute—as a pacifier. You have to look at self first.”

58. “You can learn from a dummy. You can watch a dummy and learn what not to do. I’ve always been an observant individual. You don’t know how much you love something until you can’t do it. That’s one thing I can say that I learned. I learned how much I love music.”

59. “I suffer from deep depression, so my only release is music.”

60. “I could care less about the particular. I like to make music.”

62. “I don’t pay attention to sales because it’s not about that for me. It’s about the music. Music is all I have.”

63. “I always had music growing up, but music was also like a journal. It was like my personal diary or personal journal. A lot of the things I couldn’t express to an individual, I would express them in my music.”

64. “My music is incredible. I don’t know what to call it because I’ve yet to see an artist display the different talents I display or create the different genres that I have created; from rock and roll to heavy metal to soft rock to rap to country. I display so many styles. That’s why they love me.”

More Kevin Gates Quotes for Those Who Are Curious About Him

67. “Whatever an individual chooses to do with themselves, long as it doesn’t affect me and they’re respectful with it, I don’t care what they do. Because I’m not perfect and I have flaws, so who would I be to be judgmental?”

68. “I’ve had good times and I’ve had bad times and I reminisce, maybe when I lay down, but throughout my day I keep myself engulfed in whatever moment I’m in because it could steer me into a depressed state.”

69. “I’m a perfect imperfection. My craft has been perfected. I just need affection, emotionally. I’m an introvert but it comes off as aggression.”

70. “I’m a big skeptic so I won’t just go off what an individual may tell me. I gotta do the research. I’ma get different literature on that one subject and just compare and contrast. I do my own selective studies.”

What Kind of Influence Does Kevin Gates Have On You?

Not everyone’s lucky enough to start off life comfortably. In fact, more than 600 million people live under the poverty line. This, along with many other difficulties, might cause young people to go against the law, like what happened with Kevin Gates.

It could have been so easy for him to just give up on life and be a nuisance to society, especially after his years in prison. But, Kevin Gates rose above every challenge thrown at him and became the embodiment of the saying, “No pain, no gain.” By accepting his flaws and circumstances, he was able to work around them and find ways to become a better person.

He found solace and comfort and music, and through that, he was able to lift himself and his family from poverty. Through his words full of truth, he helps younger kids of today veer away from the same mistakes he committed when he was younger.

Indeed, music is an art that heals both the composer and the listener. After all, there is so much power that can be found in a single tune or lyric. Like Kevin Gates, find your purpose and hold onto it; pursue what you love and leave a positive impact in the world.

Which of Kevin Gates’s songs is your favorite? Did you learn a lot from this collection of Kevin Gates quotes? Share your thoughts below.