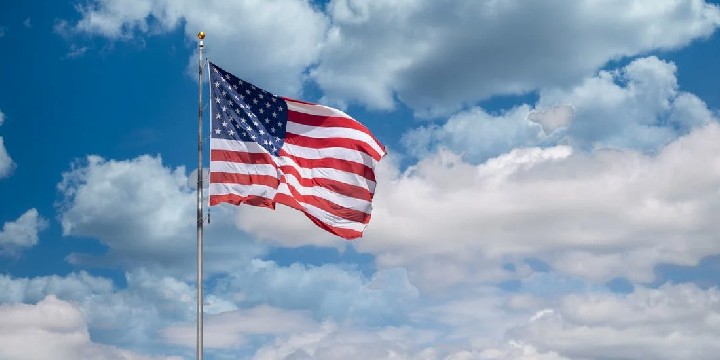 Let this list of America quotes inspire you to see the beauty of this nation’s history, culture, and people!

The United States of America has a rich and colorful history. It started from humble beginnings to become the strongest nation in the world.

Moreover, it has always been a great place to live because of its diverse culture and growth opportunities.

But, like all countries, even with all of its success, there are times when America still falls short of its full potential.

So, as proud citizens, we must do our part to ensure that our country continues to uphold its values and strive for improvement.

If you want to know more about this topic, this collection is for you. Relax, take a seat, and get ready to get a glimpse of America’s greatness!

And don’t forget to check out these patriotic quotes and Independence Day quotes.

1. “The greatness of America lies not in being more enlightened than any other nation, but rather in her ability to repair her faults.” – Alexis de Tocqueville

2. “America is the only country that went from barbarism to decadence without civilization in between.” – Oscar Wilde

4. “There’s not a liberal America and a conservative America—there’s the United States of America.” – Barack Obama

5. “America is the only country ever founded on the printed word.” – Marshall McLuhan

6. “There is nothing wrong with America that cannot be cured by what is right with America.” – Bill Clinton

7. “America was not built on fear. America was built on courage, imagination, and an unbeatable determination to do the job at hand.” – Harry S. Truman

8. “The fate of America cannot depend on any one man. The greatness of America is grounded in principles and not on any single personality.” – Franklin D. Roosevelt

9. “America is hope. It is compassion. It is excellence. It is valor.” – Paul Tsongas

10. “The essence of America, which really unites us, is not ethnicity, nationality, or religion. It is an idea, and what an idea it is—that you can come from humble circumstances and do great things.” – Condoleezza Rice

11. “Because of what America is and what America has done, a firmer courage, a higher hope, inspires the heart of all humanity.” – Calvin Coolidge

12. “America is great because she is good. If America ceases to be good, America will cease to be great.” – Alexis de Tocqueville

13. “America is not the crude stereotype of a self-interested empire. The United States has been one of the greatest sources of progress that the world has ever known.” – Barack Obama

14. “America has seen tough times before. We’ve always known how to get through them. And we’ve always believed our best days are ahead of us. I believe that still. But we must rise to the occasion, as we always have; change what must be changed, and make the future better than the past.” – John McCain

15. “There is not a Black America and a White America and Latino America and Asian America; there’s the United States of America.” – Barack Obama

16. “America makes prodigious mistakes, America has colossal faults, but one thing cannot be denied: America is always on the move. She may be going to hell, of course, but at least she isn’t standing still.” – E.E. Cummings

17. “In the unlikely story that is America, there has never been anything false about hope.” – Barack Obama

20. “What made America great was her ability to transform her own dream into hope for all mankind.” – Nicolas Sarkozy

21. “Whatever America hopes to bring to pass in this world must first come to pass in the heart of America.” – Dwight D. Eisenhower

22. “America is the only place where miracles not only happen but where they happen all the time.” – Thomas Wolfe

23. “Dreams are the foundation of America.” – Lupita Nyong’o

24. “America is a land of opportunity, and don’t ever forget it.” – Will Rogers

26. “America is another name for opportunity. Our whole history appears like a last effort of divine providence on behalf of the human race.” – Ralph Waldo Emerson

28. “The fact is: it’s true what they say about the United States. It is a land of opportunity. It is too various to get bored with it.” – Christopher Hitchens

America Quotes That Zoom in on Freedom and Liberty

30. “The magic of America is that we’re a free and open society with a mixed population. Part of our security is our freedom.” – Madeleine Albright

31. “What is the essence of America? Finding and maintaining that perfect, delicate balance between freedom to and freedom from.” – Marilyn Vos Savant

32. “America has been the New World in all tongues, to all peoples, not because this continent was a newfound land, but because all those who came here believed they could create upon this continent a new life—a life that should be new in freedom.” – Franklin D. Roosevelt

33. “When an American says that he loves his country, he means not only that he loves the New England hills, the prairies glistening in the sun, the wide and rising plains, the great mountains, and the sea. He means that he loves an inner air, an inner light in which freedom lives and in which a man can draw the breath of self-respect.” – Adlai Stevenson II

Short America Quotes That Live in Our Heads Rent-Free

35. “America’s one of the finest countries anyone ever stole.” – Bobcat Goldthwaite

36. “America is a tune. It must be sung together.” – Gerald Stanley Lee

37. “All great change in America begins at the dinner table.” – Ronald Reagan

America Quotes That’ll Open Your Eyes to Society and Reality

40. “This is the story of America. Everybody’s doing what they think they’re supposed to do.” – Jack Kerouac

41. “America did not invent human rights. In a very real sense, it is the other way round. Human rights invented America.” – Jimmy Earl Carter

42. “I love America more than any other country in this world, and, exactly for this reason, I insist on the right to criticize her perpetually.” – James Baldwin

45. “What we need are critical lovers of America—patriots who express their faith in their country by working to improve it.” – Hubert Humphrey

46. “The fact is, with every friendship you make and every bond of trust you establish, you are shaping the image of America projected to the rest of the world.” – Michelle Obama

47. “We Americans claim to be a peace-loving people. We hate bloodshed; we are opposed to violence. Yet our hearts swell with pride at the thought that America is becoming the most powerful nation on earth and that she will eventually plant her iron foot on the necks of all other nations. Such is the logic of patriotism.” – Emma Goldman

48. “Oh, it’s home again and home again, America for me! I want a ship that’s westward bound to plow the rolling sea, to the blessed land of room enough beyond the ocean bars, where the air is full of sunlight and the flag is full of stars.” – Henry van Dyke

49. “I’m in love with this country called America. I’m a huge fan of America. I’m one of those annoying fans, you know, the ones that read the CD notes and follow you into bathrooms and ask you all kinds of annoying questions about why you didn’t live up to that. I’m that kind of fan.” – Bono

50. “America has as much diversity in people as it does in geographies.” – Terri Guillemets

51. “Diversity of thought and culture and religion and ideas has become the strength of America.” – Gary Locke

52. “You know, that diversity that America has is so special. It’s starting to really become a cool thing for young people.” – Russell Simmons

53. “The diversity of America is a strength of the country, and I don’t think that we use that. We don’t talk about our strengths. I mean, having so many diverse people in this country from all aspects of the world, and we don’t use that. I think we should talk about who we are—that melting pot that we’ve become.” – Steve Stoute

55. “‘You’re in America now,’ I said. ‘Our idea of diplomacy is showing up with a gun in one hand and a sandwich in the other and asking which you’d prefer.’” – Jim Butcher

56. “This is America, and I’ll make as much noise as I want, so just shut your own mouth.” – Garrison Keillor

57. “In America, you can say anything you want, as long as it doesn’t have any effect.” – Paul Goodman

More America Quotes for Those Curious About This Great Country

58. “America, thou half-brother of the world; with something good and bad of every land.” – Philip James Bailey

59. “America is a country which produces citizens who will cross the ocean to fight for democracy but won’t cross the street to vote.” – Grenville Kleiser

60. “Basically, there are two kinds of stereotypes out there in the world about America. There’s America the Goliath—the big, powerful, bullying country that pushes its way around the world and gets its ways, pursues its own interests nakedly, irrespective of what others want. And the other stereotype is America, the land of opportunity, where everyone can go and do anything, be anything, and make any dreams come true.” – Shashi Tharoor

Did This Collection Make You Proud That You Were Born in This Country?

The United States of America has been the land of opportunity for hundreds of years; this is one of the main reasons behind its greatness. People from all over the world travel here to live out their dreams and work toward their goals. This makes America a melting pot of many rich and unique cultures and people.

Aside from that, America is a great place to start building your dreams because there’s no class system. Everyone has a chance to succeed, and everyone can try out their ideas. Whether you want to start your own business or become a famous musician, you can achieve it here in the land of opportunity!

All it takes is a bit of courage and a leap of faith. Just believe that in the United States of America, your future is as bright as can be; you just have to find it!

With that, we hope this list of America quotes was able to give you a better understanding of what it means to be an American. Let this collection inspire you to do great things in this country and achieve your dreams!