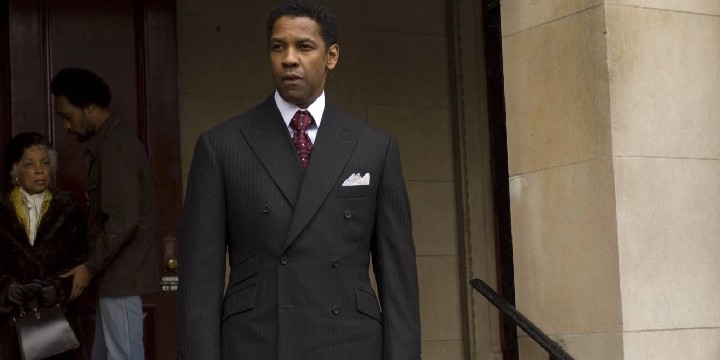 Let these American Gangster quotes give you insights into the ins and outs of life and crime.

American Gangster is a movie that revolves around the life and criminal career of Frank Lucas. He was the top smuggler of h*roin in the United States. On top of this, he’s notorious for smuggling the drugs through the coffins of American soldiers killed in Vietnam.

Beyond that, the movie also gives a peek into his backstory and the things that pushed him toward this type of business. This makes the movie even more profound and meaningful for many fans and viewers.

If you’re curious about the plot but don’t have enough time to watch the whole movie, read these American Gangster quotes we’ve compiled! We’re sure it’ll be a great first step for you to understand the morals we can learn from Frank Lucas and the other characters. Maybe it’ll even push you to take time out of your busy day to watch the entire movie!

And make sure to read these Blood In Blood Out quotes and Scarface quotes.

1. “The most important thing in business is honesty, integrity, hard work, family, and never forgetting where we came from. See, you are what you are in this world, that’s either one of two things: Either you’re somebody—or you’re nobody.” – Frank Lucas

2. “That’s the way it is now—you can’t find the heart of anything to stick the knife.” – Bumpy Johnson

4. “Laurie, I’m sorry I never gave you the kind of life you wanted, alright. I’m sorry it was never enough. Don’t punish me for being honest. Don’t take my boy away.” – Detective Richie Roberts

7. “This is the problem. This is what’s wrong with America. It’s gotten so big you can’t find your way.” – Bumpy Johnson

8. “I always wonder if people know when history’s being made. And what they’re doing at the time. This, for instance, could be a historic moment, and you’re sipping a glass of ice water.” – Dominic Cattano

9. “It’s not in my best interest to say this Frank, but quitting while you’re ahead, is not the same as quitting.” – Ric Young

10. “Brand names mean something, Nicky. Consumers rely on them to know what they’re getting. They know the company isn’t going to try to fool them with an inferior product. They buy a Ford, they know they’re gonna get a Ford. Not a f*ckin’ Datsun. Blue Magic that’s a brand name; Like Pepsi, that’s a brand name. I stand behind it, I guarantee it. They know that even if they don’t know me any more than they know the chairman of General Mills.” – Frank Lucas

11. Frank Lucas: “Let me ask you something. Do you think by putting me in jail, you’re going to stop even one junkie from dying? Because you won’t. If it isn’t me, it’ll be someone else. With me or without me, nothing’s going to change.”

Detective Richie Roberts: “Then that’s the way it is.”

Frank Lucas: “That’s right. I’m Frank and this is my place.”

Frank Lucas: “When you own something, you can call it what you want.”

13. “You think you’re going to heaven because you’re honest, but you’re not. You’re going to the same hell as the crooked cops you can’t stand.” – Laurie Roberts

14. “Just because you were honest and you didn’t take money like every other cop, I left you? No, you don’t take money for one reason. To buy being dishonest about everything else. And that’s worse than taking the money.” – Laurie Roberts

15. “What’re you doing counting this in front of everybody? Are you out of your f*ckin’ mind? Take it into a room. Now.” – Lou Toback

16. “They don’t want this to stop. It employs too many people. Cops, lawyers, judges, probation officers, and prison guards. The day dope stops coming into this country, a hundred thousand people lose their jobs.” – Detective Richie Roberts

17. “They seize it, arrest everybody, whack it up and sell it back to us. Our dope. They have been living off it for years, these New York cops. They basically control the market with it. What the f*ck has happened to the world, Frank?” – Rossi

18. “I do pay them, I pay them all. Cops, accountants, lawyers, who don’t I pay? Everybody. I pay them a fortune, it doesn’t matter. It doesn’t satisfy them. The more you pay, the more they expect. You can’t start with them because they can’t stop. It’s like a dope. They always want more.” – Frank Lucas

19. “For a cop, the uppermost thing is the arrest. For a prosecutor, the arrest is nothing without the evidence to convict. We don’t have any real evidence on anyone on this board, so they’re coming down. We’re starting over from the street.” – Detective Richie Roberts

20. Detective Richie Roberts: “I want to know everyone you’ve met for the last 20 years. Every one you sold to. Every cop you ever paid off. Every one who ever stole from you. Every one you remember.”

Frank Lucas: “Oh, I remember them all. That’s not the problem.“

Detective Richie Roberts: “What is?”

21. Mama Lucas: “You don’t shoot cops. Even I know that. Eva knows it. The only one who doesn’t seem to know is you.”

22. “You know what normal is to me? I ain’t seen normal since I was six years old. Normal is seeing the police ride up to my house, dragging my 12-year-old cousin out and tying him to a pole, shoving a shotgun in his mouth so hard they bust his teeth, then they bust two shotgun shells in his head, knocking it off. That’s what normal is to me.” – Frank Lucas

23. “The man I worked for had one of the biggest companies in New York City. He ran it for more than 50 years. 15 years, 8 months, 9 days—I was with him every day. I looked after him, took care of him, protected him—I learned from him. Bumpy was rich, but he wasn’t a white man rich, you see he wasn’t wealthy. He didn’t own his own company. He thought he did, but he didn’t. He just managed it. White man owned it so they owned him. Nobody owns me, though. Because I own my company. And my company sells a product that’s better than the competition at a price that’s lower than the competition.” – Frank Lucas

24. “His name is Frank Lucas, originally from Greensboro, North Carolina, he has a couple of arrests years ago for gambling and for carrying an unlicensed firearm. For 15 years he was Bumpy Johnson’s driver, bodyguard, and collector. He was with him when he died, he has five brothers, he’s the oldest, and a lot of cousins, they’re all living up here now, spread out in the five boroughs and New Jersey. His brother’s businesses are the distribution and collection points of Frank’s dope and his money. Everything about Frank’s life seems unpretentious and broadly legitimate, he starts early, gets up at 5 a.m., has breakfast in a diner in Harlem usually by himself, then he starts work, takes a meeting with his accountant, and with his lawyer. At night he usually stays at home, if he does go out, it’s only to one of two clubs or a handful of restaurants with his wife, ballplayers, musicians, and his friends, and never organized crime guys. Sundays he takes his mother to church and changes the flowers on Bumpy’s grave, every Sunday no matter what.” – Detective Richie Roberts

25. Frank Lucas: “I’m watching the news. Where the hell is everyone going?”

Frank Lucas: “Just like that? We’re going to leave the f*ckin’ country to the communists?”

Frank Lucas: “Well, what do you want?”

Nephew: “I want what you got Uncle Frank. I wanna be you.”

Detective Richie Roberts: “What? Haven’t you heard? We’re all f*cking crazy over here. Do you know what we do here? Cops—arrest—bad guys. The next time you come across the bridge, you should call me first. Just make sure it’s safe.”

28. Detective Richie Roberts: “You want a drink or something? Celebrate?”

Frank Lucas: “You got any holy water?”

30. Detective Richie Roberts: “This isn’t a couple of bucks.”

Javier Rivera: “Richie, a cop who turns in this kind of money says one thing: he’ll turn in cops who take money. We’ll be pariahs.”

Detective Richie Roberts: “Yes, we are.”

Javier Rivera: “Goddamn it, did we ask for this? Did we put a gun to someone’s head and say, ‘Give us your money?’ Cops kill cops they can’t trust. We can’t turn it in.”

31. Dominic Cattano: “Monopolies are illegal in this country, Frank, because no one can compete with a monopoly. If they let the dairy farmers do that, half of them would go out of business tomorrow.”

Dominic Cattano: “Which is your right. Because this is America. But not at the unreasonable expense of others. That’s un-American. You know the price you pay for a gallon of milk doesn’t represent its true cost of production. It’s controlled. Set.”

Frank Lucas: “I set a price I think is fair.”

Dominic Cattano: “It’s very unfair, in fact. Your customers are happy, but what about your fellow dairy farmers? You’re not thinking of them.”

Frank Lucas: “I’m thinking of them as much as they ever thought of me.”

Short American Gangster Quotes That Live in Our Heads Rent-Free

32. “This is my home. My country. Frank Lucas don’t run from nobody. This is America.” – Frank Lucas

35. “We need to keep this cash cow alive.” – Detective Trupo

37. Campizi: “I swear to God, Richie, I didn’t know it was you. I would never slam a door on your hand. Knowingly.”

Detective Richie Roberts: “I know he’s f*cking dead. Bandage his head, clean him up, put him on a gurney, and prop it up so he’s sitting. And open his eyes.”

39. Eva: “Why would you trust these people, the way they look at you?”

Frank Lucas: “They look at me like it’s Christmas and I’m Santa Claus.”

40. “That’s just the way it is. So what we got, Richie? We got me and you sitting here. We got that little snitch-ass driver for my brother. You got a little bit of powder. You’re going to need more than that, Richie.” – Frank Lucas

How Did These American Gangster Quotes Influence Your Worldview?

Frank Lucas’s life and decisions are not something to be idolized. But, the story of his life is worth understanding and looking into. This helps us recognize that people all have different environments that shape them into the people they are today.

In American Gangster, we see how different Frank Lucas’s upbringing is from ours. What’s normal for him may not necessarily be normal or acceptable for us, and what he thinks is best might not be the correct path for others. That helps us understand him a bit more, but it doesn’t mean we should accept his wrongdoings.

Life will not always be fair, and some people will be dealt better cards than others. If you don’t have the good cards, don’t lose hope and don’t take the path of darkness. Your fate is not something set in stone; you can always turn your life around for the better.

Let’s use American Gangster’s quotes as inspiration to strive for success and reach it through moral means. The life of crime cannot sustain glory and happiness. What you need is your genuine goodness and desire for a better life!