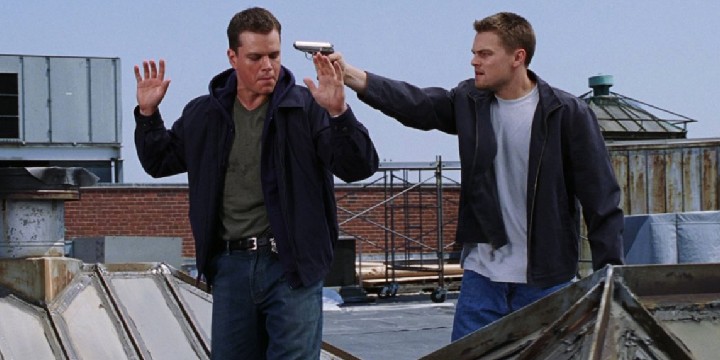 These The Departed quotes will open your eyes to the truth within man!

The Departed is a crime thriller movie starring Leonardo DiCaprio, Jack Nicholson, and many other talented stars. With the cast’s fantastic acting and the outstanding creative vision by Martin Scorsese, it received many awards. This includes several Oscars; indeed, an impressive feat!

The movie mainly revolves around two main characters—Billy Costigan and Colin Sullivan. Billy Costigan is a South Boston cop tasked to infiltrate a notorious gang. On the flip side, Colin Sullivan is a career criminal ordered to go undercover as a cop in the police department.

These two find themselves in pretty sticky situations; the only way out is for them to figure out each other’s identities and motives. Through the thickening plot, The Departed established a great moral we can all learn from. It makes us think about how good and evil can sometimes wear the same masks, making it hard to determine which is correct.

The Departed leads us to question whether we can take good or evil at face value. It’s a complicated thing to figure out. So, read through this list of the best and most insightful The Departed quotes to help you out!

And don’t forget to check out these Blood In Blood Out quotes and Scarface quotes.

2. “We deal in deception here. What we do not deal with is self-deception.” – Oliver Charles Queenan

3. “You just can’t trust a guy who acts like he’s got nothing to lose.” – Frank Costello

4. “If we’re not gonna make it, it’s gotta be you that gets out, ‘cause I’m not capable. I’m f*cking Irish. I’ll deal with something being wrong for the rest of my life.” – Colin Sullivan

5. “Just because you play a tough guy doesn’t mean you are one.” – Sean Dignam

6. “Death is hard, life is much easier.” – Madolyn Madden

8. “When you decide to be something, you can be it. That’s what they don’t tell you in the church. When I was your age they would say we can become cops or criminals. Today, what I’m saying to you is this ‘When you’re facing a loaded gun, what’s the difference?’” – Frank Costello

9. Lazio: “Without asking too many questions, do you have anyone in with Costello presently?”

10. Sean Dignam: “This is unbelievable. Who put the f*ckin’ cameras in this place?”

Police Camera Tech: “Who the f*ck are you?”

Sean Dignam: “I’m the guy who does his job. You must be the other guy.”

The Departed Quotes That’ll Make You Reflect on Life

12. “Church wants you in your place. Kneel, stand, kneel, stand. If you go for that sort of thing, I don’t know what to do for you.” – Frank Costello

Madolyn Madden: “Why? Do you? Honesty is not synonymous with truth.”

14. “The married guy seems more stable. People see the ring, and they think at least somebody can stand the son of a b*tch. Ladies see the ring, they know immediately you must have some cash or your c*ck must work.” – George Ellerby

15. Madolyn Madden: “Why is the last patient of the day always the hardest?”

Billy Costigan: “Because you’re tired, and you don’t give a sh*t. It’s not supernatural.”

17. “A man could look at anything and make something out of it. For instance, I look at you, and I think, ‘What could I use you for?’’’ – Frank Costello

19. “Look at it this way: You’re a Black guy in Boston. You don’t need any help from me to be completely f*cked.” – Billy Costigan

20. “I’m concerned about a Chinaman who thinks it’s wise to come to a business transaction with automatic weapons. None of us are carrying automatic weapons. Because here, in this country, it doesn’t add inches to your dick. You get a life sentence for it.” – Frank Costello

21. “What’s wrong with this f*cking country? Everybody hates everybody!” – Pakistani Proprietor

22. Frank Costello: “Did you ever think about going back to school?”

Billy Costigan: “School? All due respect Mr. Costello, school is out.”

The Departed Quotes to Revisit the Characters’ Iconic Lines

24. “F*cking Ricans think they know everything. If they knew sh*t, they wouldn’t be Puerto Ricans.” – Sean Dignam

25. “What are you waiting for? Do you want it to chop me up and feed the poor? Is that what you guys want.” – Billy Costigan

26. Billy Costigan: “What would you do if your boyfriend was standing right there and he saw us? Huh?”

Madden Madolyn: “I would lie.”

Billy Costigan: “Use their weapons? They signed up to use their weapons, most of them, but they watch enough TV, so they know they have to weep. There is no one more full of sh*t than a cop, except for a cop on TV.”

Interesting The Departed Quotes for Those Who Love Crime Thrillers

28. “You sit there with a mass murderer. Your heart rate is jacked, and your hand steady. That’s one thing I figured out about myself in prison. My hand does not shake ever.” – Billy Costigan

Sean Dignam: “Calm down, alright? Most people in the world do it every day. What’s the big deal?”

Billy Costigan: “Well, I’m not them, alright? I’m not f*cking them, okay?”

Sean Dignam: “Exactly. You’re nobody. You signed the papers, remember? Now we’re the only two people on the face of this earth that even know you’re a cop.”

Billy Costigan: “Well, what happens is the bullet will go right through your f*cking head!”

Billy Costigan: “Why? So you can get the parade, huh? The bagpipes and bullshit? F*ck you! F*ck you! I’m f*cking arresting you!”

Colin Sullivan: “That’s the stupidest thing you could do.”

Billy Costigan: “Shut your f*cking mouth. Come on, get up!”

Colin Sullivan: “What is this, a citizen’s arrest? Blow me! Alright, only one of us is a cop here, Bill. Do you understand that, Bill? No one knows who you f*cking are!”

Billy Costigan: “Would you shut the f*ck up!?”

32. Billy Costigan: “Frank, how many of these guys have been with you long enough to be disgruntled, huh? Think about it. You don’t pay much, you know. It’s almost a f*ckin’ feudal enterprise. The question is, and this is the only question, who thinks that they can do what you do better than you?”

Frank Costello: “The only one that can do what I do is me. A lot of people had to die for me to be me. You wanna be me?”

Mr. French: “I f*cking know you. I know your family. You make one more drug deal with that idiot, f*cking cop magnet of a cousin, and I’ll forget your grandmother was so nice to me. I’ll cut your f*cking nuts off. You understand that?”

34. Sean Dignam: “I can’t wait to wipe that f*cking smirk right off of your face.”

Frank Costello: “Wouldn’t you rather wipe my *ss for me?”

More The Departed Quotes to Fill Your Belly With Laughter

36. Fitzy: “I spent all f*cking night dragging the poor b*stard in there. Tell me how they find him so fast? Somebody walking a f*cking dog? What f*cking size a dog is that? Has to be a big f*cking dog, man. I spent all night doing it, man.”

Frank Costello: “The cops are saying he’s a cop. So, I won’t look for the cop. Are you soft, Fitz? When I tell you to dump a body in the marsh, you dump him in the marsh. Not where some guy from John Hancock goes every Thursday to get a f*cking bl*wjob!”

37. Oliver Charles Queenan: “Do you know what we do here? My section?”

Sean Dignam: “Whoa, whoa, whoa. Let’s say you have no idea and leave it at that, okay? No idea. Zip. None. If you had an idea of what we do, we would not be good at what we do, now would we? We would be c*nts. Are you calling us c*nts?”

Oliver Charles Queenan: “Staff Sergeant Dignam has a style of his own. I’m afraid we all have to get used to it.”

38. Billy Costigan: “You a psychiatrist?”

Sean Dignam: “Well, if I was, I’d ask you why you’re a Statie making 30 grand a year. And I think if I was Sigmund f*ckin’ Freud, I wouldn’t get an answer. So tell me, what’s a lace curtain motherf*cker like you doing in the States?”

Billy Costigan: “Families are always rising or falling in America, am I right?”

Oliver Charles Queenan: “Who said that?”

39. Frank Costello: “Who let this IRA motherf*cker in my bar?”

Frank Costello: “We all are. Act accordingly.”

Did These The Departed Quotes Enlighten You on the Positive and Negative Aspects of Life?

We’re led to believe that one route is better than the other, for ourselves and other people. But, if we look at just one aspect or side of things, how can we be so sure that what we’re doing is for the greater good?

It’s tricky to figure out which side we’re actually on, especially when we’re placed into tight, sticky situations. This is where The Departed comes in. The two sides of the plot show the contrast and similarities between darkness and light.

In a way, this moral creeps into society, especially in how it fleshes out every man’s struggle. We may try to deceive and tell ourselves that the evil we’re doing now will bring us good in the long run. But, this is not true; self-deception and sin, in general, will never triumph over the good.

With that, we hope this list was able to help you recognize if what you’re currently acting on is for good or not. The distinction between these two sides will never be easy to determine. But, remember to pause, breathe, and reflect; always think of the greater good!