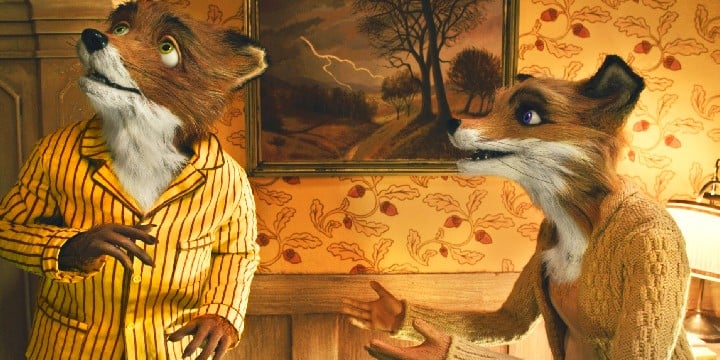 These Fantastic Mr. Fox quotes will show how a father will go to any length to provide for his family.

Fantastic Mr. Fox is a 2009 American stop-motion movie directed by Wes Anderson. It is based on Roald Dahl’s 1970 children’s novel of the same name, and it tells the story of a brave father fox’s efforts to keep his family safe and fed.

However, his way of providing goods and food for his family is illegal. He has been stealing hens, turkeys, and cider from the three meanest farmers.

The movie opened debates on how to deal with Mr. Fox’s wrongdoings. If it’s up to you, will you talk to him and learn the reasons for his actions, or will you simply imprison or kill him, as the other characters desired?

Find out more of what happened to Mr. Fox and his family through our list below! We’re sure it’ll open your eyes to the realities of life and the law.

And don’t miss out these Scooby-Doo quotes and Shrek quotes.

1. “You really are kind of a quote-unquote fantastic fox.” – Mrs. Fox

3. “There’s a lot of attitudes going on around here—don’t let me get one.” – Ash Fox

4. “Redemption? Sure. But in the end, he’s just another dead rat in a garbage pail behind a Chinese restaurant.” – Mr. Fox

5. “Honey, I am seven fox years old. My father died at seven and a half. I don’t want to live in a hole anymore, and I’m going to do something about it.” – Mr. Fox

6. “There’s nothing wrong with being respectable.” – Badger

7. “We’re all different. Especially him. But there’s something kind of fantastic about that, isn’t there?” – Mrs. Fox

8. “I guess my point is, we’ll eat tonight, and we’ll eat together. And even in this not particularly flattering light, you are without a doubt the five and a half most wonderful wild animals I’ve ever met in my life. So let’s raise our boxes—to our survival.” – Mr. Fox

Fantastic Mr. Fox Quotes That Are Filled With Insights

9. “Why a fox? Why not a horse, or a beetle, or a bald eagle? I’m saying this more as, like, existentialism, you know? Who am I? And how can a fox ever be happy without, you’ll forgive the expression, a chicken in its teeth?” – Mr. Fox

10. “I also see a room full of wild animals. Wild animals, with true natures and pure talents. Wild animals with scientific-sounding Latin names that mean something about our DNA. Wild animals each with his own strengths and weaknesses due to his or her species.” – Mr. Fox

11. “I understand what you’re saying, and your comments are valuable, but I’m gonna ignore your advice.” – Mr. Fox

12. “I think it may very well be all the beautiful differences among us that might just give us the tiniest glimmer of a chance of saving my nephew, and letting me make it up to you for getting us into this, this crazy—whatever it is. I don’t know. It’s just a thought. Thank you for listening. Cheers, everyone.” – Mr. Fox

Kristofferson: “No, you can’t.”

15. “I don’t care about the truth about yourself. This story is too predictable.” – Mrs. Fox

17. “Hmm. I guess we always were. I promise you, if I had all this to do over again, I’d have never let you down. It was always more fun when we did it together, anyway.” – Mr. Fox

18. “Twelve fox years ago, you made a promise to me, while we were caged inside that fox trap, that if we survived, you would never steal another chicken, turkey, goose, duck, or a squab—whatever they are, and I believed you. Why? Why did you lie to me?” – Mrs. Fox

22. “A lot of good animals are probably going to die, because of you! Half the woods have been obliterated, nobody can get out, and right now, my wife is at the bottom of a flint mine with no food, no water, and 27 starving animal brats! – Badger

23. “But nothing! You’re gonna get me in a lot of trouble! Besides, you’re too little and uncoordinated.” – Mr. Fox

24. “I guess we do have these three ugly farmers to thank for one thing: reminding us to be thankful and aware of each other. I’m gonna say it again: aware.” – Mr. Fox

25. “We’re going to a book party, and keep your mouth shut about any cider, because no one ever said that! Now get out of here!” – Mr. Fox

27. “But I already figured out where this fox lives. So tomorrow night, we’ll camp in the bushes, wait for him to come out of the hole in the tree, and shoot the cuss to smithereens. How does that grab you, fellas?” – Franklin Bean

28. “It’s fatal for humans, but we got enough fur to keep the voltage from getting to us. Let’s go!” – Squirrel

29. “Your tractors uprooted my tree. Your posse hunted my family. Your gunmen kidnapped my nephew. Your rat insulted my wife—and you shot off my tail. I’m not leaving here without that necktie.” – Mr. Fox

30. “Well, I guess we should, ah, probably split into a certain number of groups, and start doing something. Right?” – Badger

Kristofferson: “I’ve got mixed feelings about that.”

33. “I think I have this thing where everybody has to think I’m the greatest. And if they aren’t completely knocked out and dazzled and slightly intimidated by me, I don’t feel good about myself.” – Mr. Fox

35. “To protect their identities. Oh, right, but then why did they sign their names? Plus, we already know who they are, because they’re trying to kill us.” – Kylie

More Fantastic Mr. Fox Quotes From the Book to Learn More About the Story

37. “This place I am hoping to get to is so marvelous that if I described it to you now you would go crazy with excitement. And then, if we failed to get there, you would die of disappointment. I don’t want to raise your hopes too much, my darlings.” – Mr. Fox

Mrs. Fox: “I know it does, sweetheart. But it’ll soon get better.”

40. “What fine children I have. They are starving to death and haven’t had a drink for three days, but they are still undefeated. I must not let them down.” – Mr. Fox

Will You Do What Mr. Fox Did if You Don’t Have a Choice?

Despite appearing to be a children’s show about animal characters, it explores some very mature and profound lessons. Stealing and family relationships are some of the main topics discussed in the movie.

More than that, it also perfectly depicts the consequences of being a greedy person and surviving your conscience. We only need a couple of basic things to survive in this world, and if we become greedy and use incorrect and immoral ways to attain those things, negative things will also come to us.

There’s no doubt that Fantastic Mr. Fox is a movie for everyone. Kids will enjoy it, but adults may get a lot more out of it. It is, indeed, a tale of family and struggle that is beautifully portrayed and executed.

Hopefully, our collection was able to remind you that you can never be a winner if you constantly do the wrong thing. It may be challenging, but make sure that whatever you do is moral and righteous. Be the role model you want to see in your family!

So, which quotes are your favorites? Please, leave a comment down below.