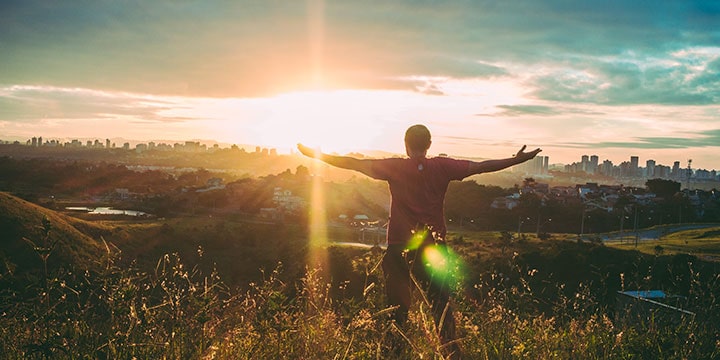 Here are the top 70 freedom quotes to help you unleash your courage and power to break the chains and be free.

Freedom is one of the most basic and most important needs of humans and society. It allows individuals to think and express without limits—actions that depict what it truly means to be human.

Without the state of being free, we are living mechanically. It is a word and idea that gives life meaning and depth.

Moreover, it challenges people and society to stop conforming to baseless standards and expectations.

Although it has different forms, it doesn’t mean that one is more important than another.

No matter what situation you’re faced with, the state of being free will always be powerful. So, if you find yourself looking for answers about freedom, then this collection is for you.

And don’t forget to check out these life quotes and inspirational quotes.

2. “Freedom is the open window through which pours the sunlight of the human spirit and human dignity.” – Herbert Hoover

3. “For to be free is not merely to cast off one’s chains, but to live in a way that respects and enhances the freedom of others.” – Nelson Mandela

4. “Freedom is never more than one generation away from extinction. We didn’t pass it to our children in the bloodstream. It must be fought for, protected, and handed on for them to do the same.” – Ronald Reagan

5. “Life without liberty is like a body without spirit.” – Kahlil Gibran

6. “You can’t separate peace from freedom because no one can be at peace unless he has his freedom.” – Malcolm X

7. “Freedom makes a huge requirement of every human being. With freedom comes responsibility. For the person who is unwilling to grow up, the person who does not want to carry his own weight, this is a frightening prospect.” – Eleanor Roosevelt

8. “Freedom cannot be bestowed. It must be achieved.” – Elbert Hubbard

9. “Freedom is the will to be responsible to ourselves.” – Friedrich Nietzsche

10. “Freedom consists not in doing what we like, but in having the right to do what we ought.” – Pope John Paul II

11. “Liberty, when it begins to take root, is a plant of rapid growth.” – George Washington

12. “When a person places the proper value on freedom, there is nothing under the sun that he will not do to acquire that freedom. Whenever you hear a man saying he wants freedom, but in the next breath, he is going to tell you what he won’t do to get it, or what he doesn’t believe in doing in order to get it, he doesn’t believe in freedom. A man who believes in freedom will do anything under the sun to acquire or preserve his freedom.” – Malcolm X

13. “We hold these truths to be self-evident: that all men are created equal, that they are endowed by their Creator with certain unalienable rights, that among these are life, liberty, and the pursuit of happiness.” – Thomas Jefferson

14. “Some birds are not meant to be caged, that’s all. Their feathers are too bright, their songs too sweet and wild. So you let them go, or when you open the cage to feed them, they somehow fly out past you. And the part of you that knows it was wrong to imprison them in the first place rejoices, but still, the place where you live is that much more drab and empty for their departure.” – Stephen King

16. “We must be free not because we claim freedom, but because we practice it.” – William Faulkner

18. “For everything that is really great and inspiring is created by the individual who can labor in freedom.” – Albert Einstein

19. “Is freedom anything else than the right to live as we wish? Nothing else.” – Epictetus

20. “No one outside ourselves can rule us inwardly. When we know this, we become free.” – Buddha

Freedom Quotes to Understand What It Means to Be Free

22. “Freedom is the sure possession of those alone who have the courage to defend it.” – Pericles

23. “The secret to happiness is freedom, and the secret to freedom is courage.” – Thucydides

24. “Between stimulus and response, there is a space. In that space is our power to choose our response. In our response lies our growth and our freedom.” – Viktor Frankl

25. “The only real prison is fear, and the only real freedom is freedom from fear.” – Aung San Suu Kyi

26. “May we think of freedom, not as the right to do as we please, but as the opportunity to do what is right.” – Peter Marshall

27. “Those who expect to reap the blessings of freedom must, like men, undergo the fatigue of supporting it.” – Thomas Paine

Deep Freedom Quotes That Are Full of Wisdom

28. “Freedom and justice cannot be parceled out in pieces to suit political convenience. I don’t believe you can stand for freedom for one group of people and deny it to others.” – Coretta Scott King

29. “Necessity is blind until it becomes conscious. Freedom is the consciousness of necessity.” – Karl Marx

30. “Independence is a heady draft, and if you drink it in your youth, it can have the same effect on the brain as young wine does. It does not matter that its taste is not always appealing. It is addictive, and with each drink, you want more.” – Maya Angelou

31. “Conformity is the jailer of freedom and the enemy of growth.” – John F. Kennedy

32. “Lock up your libraries if you like, but there is no gate, no lock, no bolt, that you can set upon the freedom of my mind.” – Virginia Woolf

33. “None are more hopelessly enslaved than those who falsely believe they are free.” – Johann Wolfgang von Goethe

34. “We were the people who were not in the papers. We lived in the blank white spaces at the edge of print. It gave us more freedom. We lived in the gaps between the stories.” – Margaret Atwood

35. “I think of a hero as someone who understands the degree of responsibility that comes with his freedom.” – Bob Dylan

36. “The only way to deal with an unfree world is to become so absolutely free that your very existence is an act of rebellion.” – Albert Camus

37. “Order without liberty and liberty without order are equally destructive.” – Theodore Roosevelt

38. “Freedom is not worth having if it does not include the freedom to make mistakes.” – Mahatma Gandhi

39. “It is difficult to free fools from the chains they revere.” – Voltaire

Short Freedom Quotes to Think About

40. “Freedom, in any case, is only possible by constantly struggling for it.” – Albert Einstein

42. “Responsibility is the price of freedom.” – Elbert Hubbard

44. “I know but one freedom and that is the freedom of the mind.” – Antoine de Saint-Exupéry

45. “Freedom is the right to tell people what they do not want to hear.” – George Orwell

46. “Freedom is nothing but a chance to be better.” – Albert Camus

Freedom Quotes That Will Show You the Importance of Independence

48. “For what avail the plow or sail, or land or life, if freedom fail?” – Ralph Waldo Emerson

49. “I am no bird, and no net ensnares me. I am a free human being with an independent will.” – Charlotte Brontë

50. “When we lose the right to be different, we lose the privilege to be free.” – Charles Evans Hughes

53. “The most courageous act is still to think for yourself, aloud.” – Coco Chanel

Freedom Quotes to Enlighten You on the Emancipation of Society

54. “Better to die fighting for freedom than be a prisoner all the days of your life.” – Bob Marley

55. “Emancipate yourselves from mental slavery. None but ourselves can free our minds!” – Marcus Garvey

56. “They who can give up essential liberty to obtain a little temporary safety deserve neither liberty nor safety.” – Benjamin Franklin

57. “The great revolution in the history of man, past, present, and future is the revolution of those determined to be free.” – John F. Kennedy

58. “True individual freedom cannot exist without economic security and independence. People who are hungry and out of a job are the stuff of which dictatorships are made.” – Franklin D. Roosevelt

59. “The liberties of a people never were, nor ever will be, secure when the transactions of their rulers may be concealed from them.” – Patrick Henry

60. “Liberty cannot be preserved without general knowledge among the people.” – John Adams

61. “When a man is denied the right to live the life he believes in, he has no choice but to become an outlaw.” – Nelson Mandela

62. “People demand freedom of speech as a compensation for the freedom of thought which they seldom use.” – Søren Kierkegaard

63. “Our responsibility as citizens is to address the inequalities and injustices that linger, and we must secure our birthright freedoms for all people.” – Barack Obama

64. “It does not take a majority to prevail, but rather an irate, tireless minority, keen on setting brushfires of freedom in the minds of men.” – Samuel Adams

65. “What do you suppose will satisfy the soul, except to walk free, and own no superior?” – Walt Whitman

66. “If the freedom of speech is taken away, then dumb and silent we may be led, like sheep to the slaughter.” – George Washington

67. “Man will never be free until the last king is strangled with the entrails of the last priest.” – Denis Diderot

68. “Freedom is what you do with what’s been done to you.” – Jean-Paul Sartre

69. “But what is liberty without wisdom, and without virtue? It is the greatest of all possible evils, for it is folly, vice, and madness, without tuition or restraint.” – Edmund Burke

70. “Freeing yourself was one thing, claiming ownership of that freed self was another.” – Toni Morrison

Did These Quotes Change the Meaning of Freedom for You?

Freedom matters for everyone. It may be a commonly used word that most of us are familiar with, but it has a deep meaning that plays a massive role in our life.

However, even if it is a simple term with a straightforward definition, not all of us know the weight that it holds. Freedom dictates how we act, think, and live. After all, no one can truly progress in the world if chains hold him back.

The depth of the word may vary among different people with diverse cultures and beliefs, but its idea is universally sought. In fact, many people offer their whole lives to be a part of the movement for achieving true independence for everyone. This is because freedom—in its entirety and all its forms—is a very valuable part of our life.

Hopefully, these quotes were able to guide you toward the true definition of freedom. Let these meaningful words sink in and change your life and reality.

Which freedom quote is your favorite? Do you have more quotes to add to the collection? We’d love to hear from you in the comments below.