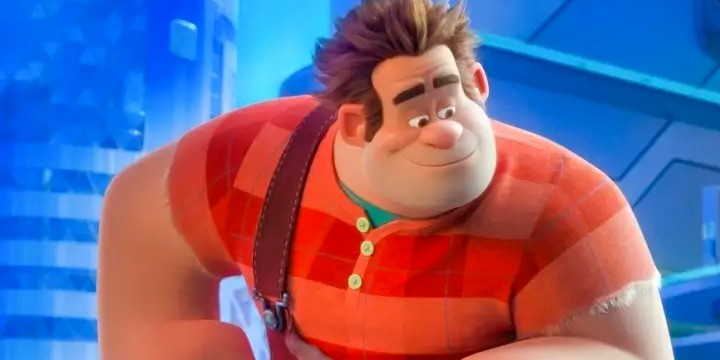 If you are looking for quotes that will brighten up your day and teach you some valuable lessons, then these Wreck-It Ralph quotes are for you!

Wreck-It Ralph is an animated comedy movie released in 2012 by Walt Disney Pictures.

It features the story of Wreck-It Ralph, a video game villain who is determined to be a hero to earn the acceptance of his peers.

The movie may be catered to kids who like playing games, but everyone can learn from the complex story and characters.

For one, Wreck-It Ralph will teach you to stop being judgmental of other people because we are all part of our own stories.

It helps us be more understanding and empathetic and proves how incredible it is to be kind and humane.

There is definitely a lot to learn from these Wreck-It Ralph quotes about friendship, acceptance, and more.

So, don’t miss out on this gem by reading our complete collection below.

And make sure to check out these Shrek quotes and Tangled quotes.

3. “‘Fear’ is a four-letter word, ladies! You wanna go pee-pee in your big boy slacks, keep it to yourself!” – Sergeant Tamora Jean Calhoun

5. “You don’t know what it’s like to be rejected and treated like a criminal.” – Fix-It Felix Jr.

6. “It’s hard to love your job when no one else seems to like you for doing it.” – Wreck-It Ralph

7. “Sometimes, I think, man, it sure must be nice being the good guy.” – Wreck-It Ralph

9. “What’s going on in this candy-coated heart of darkness?” – Wreck-It Ralph

10. “You know, you could just stay here and live in the castle where no one would complain about your stench or treat you bad ever again. You can be happy.” – Vanellope von Schweetz

11. “I’m already happy. I got the coolest friend in the world!” – Wreck-It Ralph

12. “The best part of my day is when I get thrown off the roof. Because when the Nicelanders lift me up, I get a perfect view of Sugar Rush, and I can see Vanellope racing. The kid’s a natural, and the players love her, glitch and all, just like I knew they would.” – Wreck-It Ralph

13. “If you leave your game, stay safe. Stay alert! And whatever you do, don’t die! Because if you die outside your own game, you don’t regenerate ever! Game over.” – Sonic the Hedgehog

14. “What is, was that? I can’t hear you. Your breath is so bad it made my ears numb.” – Vanellope von Schweetz

16. “Your face is still red. You might want to hit it with your hammer again.” – Sergeant Tamora Jean Calhoun

18. “They invited Pac-Man? That cherry-chasing dot-muncher isn’t even part of this game!” – Wreck-It Ralph

19. “I sleep in these candy wrappers. I bundle myself up like a little homeless lady.” – Vanellope von Schweetz

20. “Do you have any idea what you put me through? I ran higgeldy-piggeldy all over creation looking for you! I almost drowned in chocolate milk mix! And then, I met the most dynamite gal.” – Fix-It Felix Jr.

Wreck-It Ralph: “Well, you almost blew up the whole mountain.”

23. Vanellope von Schweetz: “Why are your hands so freakishly big?”

Wreck-It Ralph: “I don’t know. Why are you so freakishly annoying?”

24. “Everyone, calm down. Ralph probably fell asleep in the washroom of Tapper’s again.” – Fix-It Felix Jr.

25. “My name’s Ralph, and I’m a bad guy. Uh, let’s see, I’m nine feet tall. I weigh 643 pounds, got a little bit of a temper on me, my passion bubbles very near the surface, I guess, not gonna lie. Anywho, what else? I’m a wrecker. I wreck things professionally. I mean, I’m very good at what I do. Probably the best I know.” – Wreck-It Ralph

30. “News flash: neither one of us is getting what we want!” – Wreck-It Ralph

31. “Hey cough drop! Explain something to me. If Vanellope was never a racer, then why is her picture on the side of the game console?” – Wreck-It Ralph

32. “No, not cool! Unhygienic, and lonely, and boring, and that crummy medal was going to change all that. I go home with that baby around my neck, and I’ll get a penthouse, pies, ice sculptures, fireworks! Ah, it’s grown-up stuff, you wouldn’t understand.” – Wreck-It Ralph

37. “Look, the code may say I’m a princess, but I know who I really am, Ralph. I’m a racer with the greatest superpower ever! I was here! I was there! I was glitching through the walls! I’m not giving that up!” – Vanellope von Schweetz

44. “Don’t worry. I’ve got it under control.” – Vanellope von Schweetz

45. “I’m not a thief! I just burrowed your stupid coin. I was gonna give it back to you as soon as I win the race.” – Vanellope von Schweetz

47. “I relate to you, Ralph. When I hit bottom, I was crushing a man’s skull like a sparrow’s egg between my thighs, and I think, ‘Why you have to be so bad, Zangief? Why can’t you be more like a good guy?’ Then I have a moment of clarity. If Zangief is a good guy, who will crush a man’s skull like a sparrow’s eggs between thighs? And I say, ‘Zangief, you are a bad guy, but this does not mean you are a bad guy.’” – Zangief

51. “The selfish man is like a mangy dog chasing a cautionary tale.” – Sergeant Tamora Jean Calhoun

57. “When did video games become so violent and scary?” – Wreck-It Ralph

Wreck-It Ralph Quotes That Will Break Your Heart

60. “Well, I’ll say this much, they don’t call your friend ‘Wreck-It’ for nothing.” – Sergeant Tamora Jean Calhoun

61. “Wrong! Viruses do not stop! Once those Cy-Bugs finish off Sugar Rush, they’ll invade every other game until this arcade is nothing but a smoking husk of forgotten dreams. Kohut, my cruiser!” – Sergeant Tamora Jean Calhoun

62. “Because of you, Ralph, I’m now the most powerful virus in the arcade! I can take over any game I want! I should thank you, but it’d be more fun to kill you!” – King Candy

63. “I hope you’re happy, junk pile! This game is going down, and it’s all your fault!” – Sergeant Tamora Jean Calhoun

64. “We are humanity’s last hope. Our mission: destroy all Cy-Bugs! You ready, rookie? Let’s find out.” – Sergeant Tamora Jean Calhoun

Wreck-It Ralph: “I love my momma!”

66. “Back when the arcade first opened, Turbo Time was by far the most popular game, and Turbo, he loved the attention. So when Road Blasters got plugged in and stole Turbo’s thunder, boy, was he jealous. So jealous that he abandoned his game and tried to take over the new one. Turbo ended up putting both games and himself out of order, for good.” – Fix-It Felix Jr.

67. “Doomsday and Armageddon just had a baby, and it is ugly!” – Sergeant Tamora Jean Calhoun

68. “I bet you really gotta watch where you step in a game called ‘Hero’s Doodie!'” – Vanellope von Schweetz

70. “I wish I knew, ma’am. He was acting all squirrely last night, going on about cake and medals, but I never thought he’d go Turbo.” – Fix-It Felix Jr.

Did These Wreck-It Ralph Quotes Make You Reflect on Who You Are?

We may have made many mistakes in the past that lead us to believe we’re bad people. We get so caught up in these mistakes and let them define us to the point that we forget our true identities.

In Wreck-It Ralph, we witness how other video game characters judged Ralph for his role in the arcade. He put so much thought into how others viewed him, and in the end, he also saw himself as a villain. This lowered his self-esteem and made him believe that the only way to be good is to do an overhaul of his personality.

However, everyone who watched the movie knows how wrong this thinking is. We must leave this mindset of conforming behind and remember that we are who we make ourselves to be. Keep in mind that our identities are not predetermined and decided by fate because we make our own destinies.

Hopefully, these quotes were able to help you reflect on yourself and who you want to be. Always remember Ralph’s story and live your life to the fullest!

Which Wreck-It Ralph quote is your personal favorite? Do you have more quotes to add? Share your thoughts below.