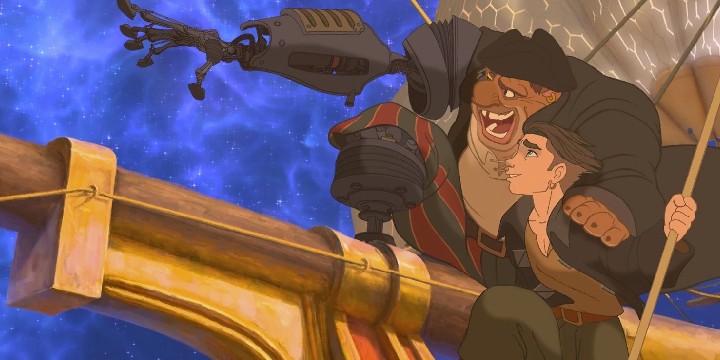 Let these Treasure Planet quotes inspire you to reflect and enter the depths of self-discovery and love.

Treasure Planet is a Disney movie based on Robert Louis Stevenson’s novel, Treasure Island. It is a sci-fi spin-off about Jim Hawkins’s adventures in finding the location of Treasure Planet.

More than the excitement that you will feel from the action-packed plot, it will also teach you about reaching your dreams.

Jim was determined to find Treasure Planet, no matter how hard it was. This speaks volumes about his character’s personality.

Through this, we learn about perseverance, dedication, and integrity. Undoubtedly, he is an inspiration and motivation that can encourage little kids and adults to reach their goals in life.

So, add this to your must-read list now to help you reflect on yourself and your life. Keep reading below to learn more about the movie, Treasure Planet.

And don’t forget to check out these Beauty and the Beast quotes and The Little Mermaid quotes.

1. “Look at you glowing like a solar fire. You’re something special, Jim. You’re gonna rattle the stars. You are!” – John Silver

2. “I was never much good at games. Always hated to lose.” – John Silver

3. “You got the makings of greatness in you, but you got to take the helm and chart your own course! Stick to it, no matter the squalls! And when the time comes, you’ll get the chance to really test the cut of your sails and show what you’re made of! And well, I hope I’m there, catching some of the light coming off you that day.” – John Silver

4. “I’m starting to see my life pass in front of my eyes! At least, I think it’s my life. Was I ever dancing with an android named Lupe?” – B.E.N

5. “I mean, at least you taught me something, ‘Stick to it, right? Well, that’s just what I’m gonna do! I’m going to make sure that you never see one doubloon of my treasure!” – Jim Hawkins

6. Jim Hawkins: “Ah, I’ve got some plans to make people see me a little different.”

Jim Hawkins: “Not this time.”

John Silver: “Just a lifelong obsession, Jimbo. I’ll get over it.”

8. “All my life, I dreamed of an adventure like this. I’m just sorry I couldn’t have been more helpful to you.” – Dr. Delbert Doppler

9. “Well, this has been a fun day. Making new friends, like that spider psycho.” – Jim Hawkins

10. “Ohhh, you still don’t know how to pick your fights, do you, boy? Now, mark me. Either I get that map by dawn tomorrow or so help me, I’ll use the ship’s cannons to blast y’all to kingdom come!” – John Silver

12. “On the clearest of nights, when the winds of the Etherium were calm and peaceful, the great merchant ships with their cargos of Arcturian solar crystals felt safe and secure. Little did they suspect that they were pursued by pirates. And the most feared of all these pirates was the notorious Captain Nathaniel Flint.” – Jim Hawkins

13. Jim Hawkins: “Do you think somebody will ever find Treasure Planet?”

Sarah Hawkins: “Sweetheart, I think Treasure Planet is more like a legend.”

15. Dr. Delbert Doppler: “Flints’ Trove? The loot of a thousand worlds? Do you know what this means?”

Jim Hawkins: “It means that all that treasure is only a boat ride away!”

16. Sarah Hawkins: “Delbert, would you please explain how ridiculous this is?”

Sarah Hawkins: “Now, at last, we hear some sense!”

Dr. Delbert Doppler: “That’s why I’m going with you!”

17. “You know the rules. They’ll be no brawling on this ship. Any further offenders will be confined to the brigg for the remainder of the voyage. Am I clear, Mr. Scroop?” – Mr. Arrow

B.E.N.: “You mean the miles and miles of machinery that run through the entire course of the inside of this planet? Not a clue!”

20. “With that treasure, we could rebuild the Benbow a hundred times over!” – Jim Hawkins

21. “Doctor, I’d love to chat. Tea, cake, the whole shebang, but I have a ship to launch, and you’ve got your outfit to buff up.” – Captain Amelia

Treasure Planet Quotes That’ll Leave an Impression on You

22. “They weren’t exactly singing my praises when I left home. But I’m gonna change all that.” – Jim Hawkins

23. “You have the most beautiful eyes.” – Captain Amelia

24. “In an honest service, there is thin commons, low wages, and hard labor.” – Black Bart

25. “We best be keeping a sharp eye on this one, eh, Morph? Wouldn’t want him straying into things he shouldn’t.” – John Silver

John Silver: “I’m hoping it is, Jimbo. I most surely am.”

27. Sarah Hawkins: “Are you saying that because it’s the right thing, or because you really want to go?”

28. “Jim, this should be a wonderful opportunity for the two of us to get to know one and other. You know what they say. ‘Familiarity breeds,’ um, well, ‘contempt.'” – Dr. Delbert Doppler

Sarah Hawkins: “Jim, there is absolutely no way.”

Jim Hawkins: “Don’t you remember? All those stories?”

Sarah Hawkins: “That’s all they were! Stories!”

Funny Treasure Planet Quotes to Fill Your Day With Laughter

32. John Silver: “Didn’t your pap ever teach you to pick your fights a bit more carefully? Your father was not the teaching sort?”

Jim Hawkins: “No. He was more the ‘taking off and never coming back’ sort.”

33. “Mr. Arrow, I’ve checked this miserable ship from stem to stern, and as usual, it’s spot on. Can you get nothing wrong?” – Captain Amelia

34. “Dang it, Jim! I’m an astronomer, not a doctor! I mean, I am a doctor, but I’m not that kind of doctor. I have a doctorate. It’s not the same thing. You can’t help people with a doctorate.” – Dr. Delbert Doppler

36. Captain Amelia: “Did you actually aim for that?”

Dr. Delbert Doppler: “You know, actually I did.”

37. “Doctor, to muse and blabber about a treasure map in front of this particular crew demonstrates a level of ineptitude that borders on the imbecilic. And I mean that in a very caring way.” – Captain Amelia

38. “I feel like such a useless weakling with abnormally thin wrists.” – Dr. Delbert Doppler

41. “That was more fun than I ever want to have again.” – Dr. Delbert Doppler

42. Scroop: “Cabin boys should learn to mind their own business.”

Jim Hawkins: “Why? Do you have something to hide, bright eyes?”

43. “Why, Mr. Arrow, sir. Bringing in such fine and distinguished gents to grace my humble galley. Had I known, I’d have tucked in me shirt.” – John Silver

44. Captain Amelia: “I don’t much care for this crew you hired. They’re, how did I describe them, Arrow? I said something rather good this morning before coffee.”

Captain Amelia: “There you go, poetry.”

British Pirate: “I pummel you good!”

More Treasure Planet Quotes for Those Who Loved the Movie

47. “I keep dreaming one day I’ll open that door, and there he’ll be, just the way he was. A smiling, happy little boy, holding a new pet and begging me to let him keep it.” – Sarah Hawkins

48. “If I could maneuver a skiff like that when I was your age, they’d be bowing in the streets when I walked by today.” – John Silver

50. Billy Bones: “He’s a-coming. Can you hear him? Those gears and gyros clicking and whirring like the devil himself!”

Jim Hawkins: “Hit your head there pretty hard, didn’t ya?”

Can You Relate With Jim Hawkins’s Need to Prove His Self-Worth and Purpose?

We’re used to movies that focus on romantic plots. But, Treasure Planet is one of the Disney movies that will make you think deeply about yourself.

It zooms in on finding who you are and accomplishing your goals in life. It is a helpful representation of what it feels like to have the need to prove yourself and your purpose. In a way, some part of us can relate to Jim Hawkins’s feelings and thoughts.

He had a tremendous yearning for his mother’s acceptance—a feeling that we can all indeed relate to in one way or another. Jim may speak ridiculously, and his dreams may seem far-fetched, but his intentions in doing so came from love and innocence.

Hopefully, these Treasure Planet quotes were able to entertain you and made you think about the characters. The next time you watch the movie, remember the top lines in our collection. Like Jim, continue soaring in life and dreaming high!

Which Treasure Planet quote is your favorite? Do you have more to add to the collection? Comment below!