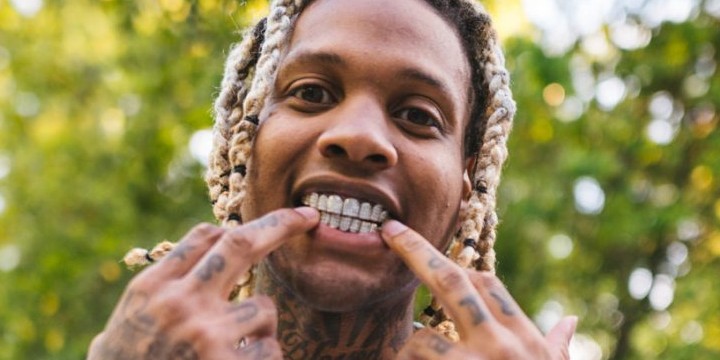 If you are into Drill music, I’m sure you’ll enjoy these Lil Durk quotes we’ve compiled for you.

So, if you’ve been waiting for the right opportunity to read this collection, the time has finally come!

Lil Durk’s interest in music began at a young age, and he soon began recording his own music.

Later, he signed with the music label Def Jam Recordings and is now widely considered as the best rapper ever to be associated with the famous label.

Lil Durk is well-known for linking his music to the violence of Chicago’s streets and popularizing the “Drill Music” style.

And make sure to read these Meek Mill quotes and G Herbo quotes.

4. “I’m just trying to show people that I ain’t gotta ride off no movement. I can ride off myself.”

6. “Growth doesn’t come with the people you expect to grow with you.”

7. “My message is just showing people how I came from nothing.”

10. “I’m a good guy at the end of the day, you know what I’m saying? A lot of people will believe what they see in the media from a long time ago. I’m just growing as an artist and as a person.”

15. “Everybody is always going to sound like somebody. You got to separate yourself.”

17. “I’m really living my dream. So if I were to change anything up, I probably wouldn’t be where I am.”

21. “I can’t complain ‘bout nobody and their family all I know is I’mma take care mine no matter what.”

23. “I can turn dreams to nightmares without you knowing it’s me.”

28. “We out working the hardest workers.”

30. “I would say I grew without a doubt. My whole energy in life—as an artist and as a person—has definitely got me smarter and wiser.”

31. “I doubted myself when I was losing, thankful for not giving up.”

32. “I get congratulations from the people who matter the most in my life. Thank y’all.”

34. “There’s definitely a lot of responsibility to keep the good energy going.”

40. “The streets are my hustle, I’ve been through the struggle.”

42. “I gotta stay in that light where people will see me and hear me. And not be scared of me, you know?”

43. “Be with someone who can make you laugh, when the whole world tries to make you sad.”

44. “Don’t be scared to live your life without judgment.”

45. “Death can happen anywhere, but kids in Chicago—like 4 years old—can get shot. You don’t really hear that in too many places.”

Lil Durk Quotes About Being Loyal

56. “Gotta be a snake to hang around your snakes.”

57. “Where them people be with you, but they really don’t love you.”

58. “I know you with him ‘cause he gotta sack. You say you don’t like no feelings attached. I know that you lied and can’t mix it with facts.”

59. “Don’t call me your brudda if you ain’t prove your loyalty.”

60. “Don’t get too comfortable around dem snakes.”

65. “Always read your contract. Know what you’re getting yourself into. Know your worth.”

68. “It feels good to be in a place now where I can give back to my community.”

69. “We came from nothing really. One house. Ten people. Even days the lights were off. The worst days were not eating. Surviving off rice and toast.”

75. “Even when you’re winning, keep working like you’re losing.”

79. “Sometimes we laugh and sometimes we cry, but I guess you know now, baby. I took a half and she took the whole thing, slow down, baby.”

Lil Durk Quotes That Will Empower You

82. “I think my problem is that I argue with people—no matter their age.”

83. “Can’t see me, you gotta pull up Youtube. Even though my situation you lose.”

84. “I was tired, they didn’t realize. Certain vibes, it don’t feel right. Plenty nights got me traumatized.”

85. “Are you married to the streets? It’s hard to get a divorce. It’s even hard to get separation.”

87. “Been through worse before. Like why you put me last. I put you first before.”

89. “When I do shows, I take pictures and make the fans feel like family. All of that really matters. That’s the cheat code if you ain’t got a hit.”

90. “And if you thinking ‘bout taking my chain, just know you will die with it.”

91. “Atlanta is definitely where it’s at. I still go back to Chicago a lot though, I got family there.”

92. “I think every artist should go for a Grammy.”

93. “I just moved to Atlanta so the change of scenery and environment put me in a different mood and a different vibe, both good.”

95. “I know the consequences of my actions.”

96. “I was 17 and out of school, living with my mom, starving, not eating, getting locked up, no focus, no guidance. When you ain’t got no guidance, you can’t do too much. But then I had my first son and started working. I got the right people around me.”

97. “The people who never did sh*t for me always expect me to break my neck for them.”

104. “Bone Thugs is one of my favorite rap groups of all time. I listened to them all the time when I was a kid.”

108. “You don’t know who really love you at heart when you got money.”

110. “It piss me off how y’all change shit around tryna make it like somebody a hoe talking bout her like talking bout my kids kill that rumor my b*tch ain’t nun like you goofy hoes.”

111. “You can post your money if you take care your family and put your n*gg*s in position to win and def make sure your kids took good care of you gotta be a opp or somebody wit me hit ya hoe if you hate on me.”

113. “The one I call my brother not my brother cause he told them other n*gg*s we not brothers.”

114. “Gotta watch out for who loves me and the same people who hurt me.”

115. “Been around my brothers, you give me endurance.”

119. “If you love the streets more than you love your family, you crazy.”

121. “I’m undefeated—that’s the stone truth ‘cause battling me is like fighting.”

125. “I never thought I would see the outside of Chicago.”

128. “Certain parts are bad in every city, but Chicago is beautiful.”

Lil Durk Quotes That Will Make You Think

130. “I don’t think anybody feels safe in Chicago. Bullets ain’t got no name on them.”

133. “System lost my daddy, man. That shit is scary. Life without parole is so much weight to carry. Signed to the streets yea, b*tch, I’m married.”

135. “My father was incarcerated for 25 years, 26 years, so I had a rough past, but me moving to Atlanta, I just thought that changed my whole identity—my thinking.”

137. “I use the studio as my drug. That’s where I relieve everything at—the studio.”

Lil Durk Quotes That Will Change Your Life

141. “You got to want to evolve. It’s something you can practice on but it just came to me. I wasn’t really sitting there like, ‘What can I do to get better?’ It just came to me, talking to my people and my crew. They just tell me what my strongest and weakest points are at.”

143. “Growing up in Chicago is hard. I’d say 80 percent of the people ain’t really got no daddies. Their household wasn’t right. All they know is the streets and getting some money to support each other and support their family.”

144. “I can buy anything I want now. It hasn’t changed me personally. It just changed what I can do for myself and my family.”

146. “Real in the streets, but to them I keep it real. I know how these haters talking, hoping I can’t keep a deal.”

149. “I been living down in Atlanta, but everyone back home has been in my thoughts, especially those doing something for the community and all the neighborhood heroes. I thought about all the first responders putting their lives on the line to help out and it inspired me, so I took a jet back to Chicago to show my thanks.”

Lil Durk Quotes About His Career

151. “I like aiming for the producers who are hungry. I don’t chase the waves.”

153. “Put your own twist to it. That’s how you stay relevant. Or things get old and boring.”

154. “I worked with Ty Dolla Sign, YG, Nipsey Hussle, Metro Boomin—I build relationships, and I try to stay afloat with everyone who is hot or cool, period.”

155. “I wanna get the streets riled back up. I wanna get super tours and bookings.”

158. “I’ve been with Def Jam Records for five years and they gave me my first recording contract so for that I’m forever grateful.”

159. “Shoutout to my competition. These shots to my opposition.”

160. “I remember they told me I sing too much. I became the voice and gave ‘em a different touch.”

161. “If you got a vibe with a producer, I think you should go full-fledged instead of being satisfied with two songs.”

162. “I let my partners and my DJ listen to my songs and if they say, ‘Oh yeah I felt that one’ or ‘I am feeling that’ then I write it down and we just continue building the album from there.”

163. “When I began to rap, I wasn’t taking it real seriously. As I start seeing good things, it’s getting serious.”

164. “I let my team pick what order the records go. I don’t pick my own records. I’m a fan of my music regardless so you have to think outside of the box.”

167. “Sometimes, the people you think pick you up low key be the downfall.”

173. “I support and I’mma start supporting more young turnt n*gg*s who don’t hate on the next man.”

175. “I know what you did, don’t wanna hurt no more. Even though you took me through some hell.”

Which of These Lil Durk Quotes Motivated You to Move On From Your Past?

Like other Drill music pioneers such as Chief Keef, Young Chop, and Lil Reese, Lil Durk has a rough history. Durk’s father was sentenced to life in prison while he was still a child growing up in a tough Chicago neighborhood.

He grew up in poverty, living with his mother, yet he managed to make his place in the world. Lil Durk is now more than just a brilliant musician—he is now a father to his three children and a husband to his wife. He ensures that his children have all they need so that they do not have to go through what he did as a kid.

May the quotes above inspire you to go forward in life despite your difficult background. Like Lil Durk, his history is not an impediment to his musical career success. Let this be a lesson to all of us that everything happens for a reason, and that you should not let your past hinder you from achieving your goals in the future.

Do you have any Lil Durk quotes that we didn’t include in this collection? We would be delighted to hear from you! Please leave a comment below.