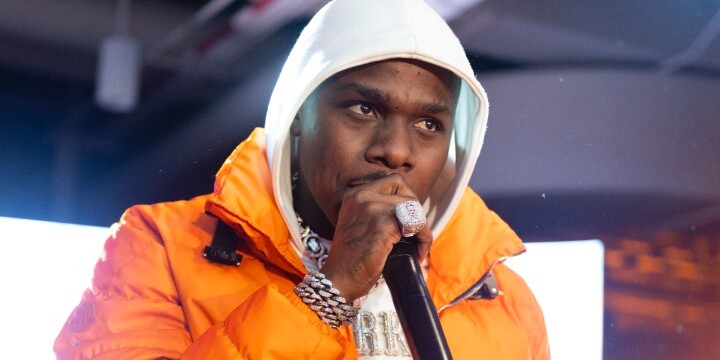 Use these DaBaby quotes to push yourself to the limit and set higher expectations for yourself.

Jonathan Lyndale Kirk, famously known as DaBaby, is an American rapper in the trap hip hop genre. DaBaby started his career in 2015 by releasing his debut mixtape titled NonFiction. But, only in 2019, with his debut album Baby on Baby, did he rise in popularity.

Until now, his songs and albums have continued to top the charts. His continuous desire for improvement made him grow, and his music evolved. Moreover, his words are full of guidance and inspiration; so, don’t miss out on reading the quote collection below.

And make sure to check out these Juice WRLD quotes and Lil Baby quotes.

4. “I was all about touching people and influencing people. I have always been that type of person. I was the one teaching people things, I just always had a way with my words, and I always spoke with substance.”

5. “It’s just the risk that I take and the sacrifice that I make. Putting myself, my career, my family’s peace of mind on the line just to do right by my fans. It ain’t no gray area. You’re either with that and willing to go out of your way to make people who contribute to your dreams coming true happy, or you aren’t.”

6. “When you reach a certain level, people don’t got nothing left to do but find a reason not to like you.”

8. “I love it when you have to perform at a certain level or else. That’s when I’m at my best.”

9. “I really came from nothing. I’m not perfect at all, but look, I done been through it all and still got plenty more to go through.”

10. “I definitely am the best rapper alive. Mark my words.”

13. “Some songs, I rap before the beat even play, and I enjoy doing that. I like walking the beat down.”

14. “Recording ’till the sun up make me think about the old days.”

16. “I just had that mindset to never settle. That’s a credit to my pops too. He used to say, ‘The sky’s the limit,’ every time we talked.”

19. “It’s just the way I’m set up, being that once-in-a-generation, once-in-a-lifetime, once-in-an-era type of star.”

20. “Becoming successful, staying successful, remaining free, and staying alive, don’t happen where I’m from. That’s something I understand can never be taken for granted.”

21. “I made that a point when I was creating my sound from the beginning. I didn’t want to sound like anybody. Once I kind of found my own sound, I mastered it.”

22. “Make sure the people you hustling for gonna still be there by the time you reach the goal.”

23. “Sometimes you gotta see more to be more. It gets weird as hell, but it’s necessary.”

24. “I’m pretty sure my expectations are higher than the average person’s. It just sets standards.”

25. “It’s the work you don’t see that gets people the furthest.”

26. “The goal was to be the hottest artist on the planet, and I think I’ve done that.”

27. “Don’t let your intentions get watered down worrying about what ‘famous’ people doing with their influence.”

28. “A lot of times, I set standards, or I put things ahead of me on purpose because that’s just how I am. I challenge myself.”

Wise DaBaby Quotes That You Will Need in Life

31. “People are unpredictable at the end of the day.”

33. “You gotta milk the game. You gotta take advantage of it. When you got something going, you would be a fool to step on your own toes and go left with it.”

35. “You and everybody around you gotta be willing to accept whatever comes with your blessings.”

36. “Everything I been through, it’s something only I know.”

37. “Just treat people the way you want to be treated.”

38. “Don’t take sh*t personally. Business is business. Do your own thing. Know how to deal with people.”

Short DaBaby Quotes to Motivate You

41. “I plan to exceed all expectations.”

DaBaby Quotes on Music and Success

52. “Everything is organic. I got the wordplay. I got the vocabulary to really, really rap.”

53. “When it comes to the music, the traits you got to have in order to make lit music, club music, to have the swag with it, to have the lingo—I got those traits, you know what I mean?”

54. “When you got a sound that doesn’t sound like nobody else, and it’s brand new, you’ve got to feed it to them. You’ve got to force it on them.”

56. “I like to have fun with my videos and performances. That’s the most fun part when it comes to the music. I get to show off my character.”

57. “My internet presence was definitely bigger than the music. I’m so good at marketing, so once I knew I had them looking, I turned up with the music. I knew what I was doing—it was premeditated.”

58. “I don’t even listen to peoples’ music. I’m really in tune with my craft. I listen to me all day long.”

59. “When I started coming on my music the way I was coming on freestyles, just relentless, at your neck, as soon as the beat starts, that’s when everything really clicked.”

60. “There was so much music growing up. But definitely, Lil Wayne was a big influence because I had more of an understanding of what I was listening to when I was getting older.”

62. “We’re from the hood and are serious and real, but at the end of the day, that doesn’t get you anywhere. I can be a worldwide artist. I can act and do comedy. I can really spit with the best of them, but I can also make songs. Some spitters can’t make songs.”

63. “I’m definitely bringing something different to the table. I’m more than excited for what’s to come. I’m going to have a great year. We’ve brought it this far, and it ain’t stopping now.”

65. “No, I wasn’t a bad kid. I was always intelligent, and strong-minded, and outgoing like I am now.”

66. “I always give my respect first because I know where I’mma take it when you disrespect me.”

67. “Anybody that is trying to go into business with me, of course, I’m gonna do my research on them.”

68. “People think I’m more rowdy than I actually am just based on certain events and things. People think I walk around looking for trouble, but really, I’m one of the most laid-back, coolest people you’ll ever meet.”

69. “I didn’t know of any rappers in Charlotte. Not to sound like I’m bragging, but I brought the music scene alive and shed the proper light on it. I took it to a whole other level when I started rapping.”

70. “I don’t play the ugly game. I think everyone is beautiful, and I see it in me now more and more.”

72. “I’mma finish this runoff successfully, reach another milestone, and take some much-needed time off to work on self-discipline, mental health, physical health, loving on my kids and family, and becoming a better person overall.”

73. “I always preferred to say less because social media ain’t a place for the truth. But lately, I been feeling like it’s my calling to say more. I don’t know how I wanna play it, though. I respect my mind too much to allow myself to be identified as one of these internet motherf*ckers.”

75. “I’ve studied the greats. I’ve studied all the genius marketers throughout the rap game. I borrow from anybody with something to offer. I’ve just always been a hustler.”

76. “I just knew I could never answer the question ‘What are you going to be when you grow up?’ ‘Cause, it was just gonna happen.”

77. “And that’s what I’m gonna be, a bad motherf*cker. And with the sh*t I’m gonna do, and whatever lane I’m in, I’m gonna bend the rules. I’m gonna stretch it out and see what’s been done, see how to do me and how to do it differently.”

DaBaby Quotes on God and His Religious Beliefs

79. “When God wrote my life out, He did something different. Nothing like it, ever before! I’m all for that sh*t too.”

80. “My relationship with God today is about expressing how grateful I am, more than anything. Asking Him for more lessons, I tell Him to give me the chance to adapt and get right. We planned this from the get-go, me and God. I asked Him for it and met Him halfway. And every time I meet Him halfway, boom, it goes how it’s supposed to go.”

Badass DaBaby Quotes to Live By

82. “I love being the underdog. Something about climbing up out the mud make them victory’s bigger.”

83. “My work ethic comes from kicking the door down. Me coming from where I come from, it ain’t a city where you got any other rappers from.”

84. “I like pushing the envelope and being creative. I’m a high-level performer. It’s about how I can take it to another level? I try not to be complacent in my music or with my performances. I gotta keep it fresh and rock out.”

85. “You have to know what you’re doing because people in the industry know what they’re doing. Also, just being mature enough to not be blown away by all of this going on.”

86. “It’s a full-on lifestyle. Know how to deal with money—reinvesting is imperative. Even when I ain’t have sh*t, I was putting everything I had back into getting here. It was all about just stretching, pushing the envelope, and making sh*t happen. That’s what I do. I make sh*t happen.”

87. “They staring at us, saying where we go. You gotta be yourself. You wanna be around me.”

Interesting DaBaby Quotes to Ponder On

89. “I’m the type to give a motherf*cker the perfect opportunity to cross me just to confirm their character. That way, when I look in the mirror, I never have to question mine.”

90. “My loyalty to you will make me cross myself.”

91. “My name was originally Da Baby Jesus, but I changed it like two years into my career because I didn’t want to offend anyone.”

93. “The overall structure that police operate on needs to change. It all needs to be changed from the inside out.”

99. “Charlotte, it’s what somebody from New York or L.A. would say is a small town, but it isn’t. It’s right in between being a small town and a city. It’s more of a city.”

100. “Now that I’m an XXL Freshman, you know, I feel like that sets high standards for me, and I feel like I have to deliver.”

Did These DaBaby Quotes Encourage You to Push Yourself to the Next Level?

DaBaby has gotten to where he is now because of his tireless passion for pursuing his career. He has the confidence, perseverance, and trust to grow and improve his music.

From marketing to video production, DaBaby is always hands-on. His work ethic only shows how he has an extreme focus on his craft that is both admirable and inspiring. The rapper’s approach to the work he puts out is a reminder of how people can only succeed through hard work and trust.

But, keep in mind that even with dedication and passion for your work, it doesn’t always guarantee success and recognition. So, remember that no matter the outcome, keep going and always trust your abilities.

Which DaBaby quote is your favorite? Did you learn a lot from DaBaby in this collection? Comment your answers below!