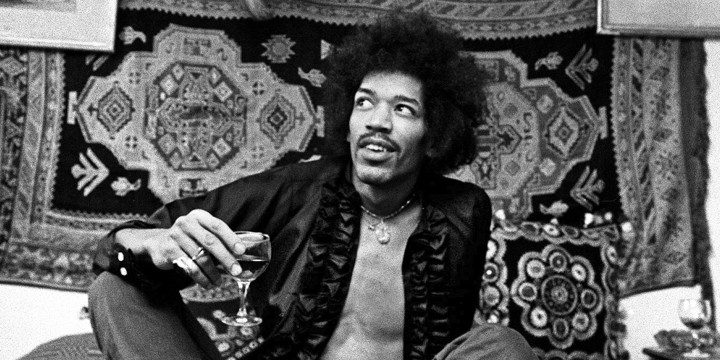 Want some inspirational quotes from a music legend?

Well, here are some quotes from Jimi Hendrix, an American musician, lyricist, and singer known for his iconic guitar playing and unusual musical style.

He is described as the best instrumentalist in rock music history by the Rock and Roll Hall of Fame because of his unique talent in playing the electric guitar.

Let’s read some sayings from Jimi Hendrix to motivate you to pursue your dreams and live your best life.

And make sure to check out these Eddie Van Halen quotes and guitar quotes too.

1. “May the dreams of your past be the reality of your future.”

2. “In order to change the world, you have to get your head together first.”

3. “If it was up to me, there wouldn’t be no such thing as the establishment.”

4. “I don’t have nothing to regret at all in the past, except that I might’ve unintentionally hurt somebody else or something.”

5. “Ain’t afraid no more. After a while, your cheap talk don’t even cause me pain. So let your bullets fly like rain.”

6. “With the power of soul, anything is possible.”

7. “I want to thank you my sweet darling for digging in the mud and picking me up.”

8. “Don’t use your brain to play it, let your feelings guide your fingers.”

9. “There’s only one thing I need to really get me there is to hear you laugh without a care.”

10. “Even Castles made of sand, fall into the sea, eventually.”

13. “I’m gonna put a curse on you and all your kids will be born completely naked.”

19. “I felt maybe too many people were coming to see me and not enough to listen to me. My nature changed as well.”

21. “Every city in the world always has a gang, a street gang, or the so-called outcasts.

When I played God Bless The Queen, I was wondering if they was gonna dig us, then quite naturally I’d go on and try to get it together.”

22. “All I’m writing is just what I feel, that’s all. I just keep it almost naked. And probably the words are so bland.”

23. “When we go to play, you flip around and flash around and everything, and then they’re not gonna see nothin’ but what their eyes see. Forget about their ears.”

24. “A broom is drearily sweeping up the broken pieces of yesterday’s life.”

25. “Purple haze, all in my brain, lately things they don’t seem the same. Actin’ funny, but I don’t know why.”

27. “Sometimes I feel we should do a free concert. I see the prices that the kids pay to see us, and it’s just ridiculous.”

29. “Your people I do not understand, so to you, I shall put an end, and you’ll never hear surf music again.”

30. “Music doesn’t lie. If there is something to be changed in this world, then it can only happen through music.”

34. “Through music, you hypnotize people and when you get them at their weakest point, you can preach into their subconscious what we want to say.”

35. “My goal is to be one with the music. I just dedicate my whole life to this art.”

37. “Music makes me high on stage, and that’s the truth. It’s like being almost addicted to music.”

38. “Music is the most important thing. I’m thinking of my future. There has to be something new, and I want to be part of it. I want to lead an orchestra with excellent musicians. I want to play music which draws pictures of the world and its space.”

39. “You see, different music is supposed to be used in different ways. I believe the best time to listen to classical music is any time when it’s very quiet or your mind is very relaxed. When you feel like daydreaming, maybe.”

40. “Sometimes you want to give up the guitar, you’ll hate the guitar. But if you stick with it, you’re gonna be rewarded.”

41. “The time I burned my guitar it was like a sacrifice. You sacrifice the things you love. I love my guitar.”

42. “I wish they’d had electric guitars in cotton fields back in the good old days. A whole lot of things would’ve been straightened out.”

43. “I just hate to be in one corner. I hate to be put as only a guitar player, or either only as a songwriter, or only as a tap dancer. I like to move around.”

46. “Imagination is the key to my lyrics. The rest is painted with a little science fiction.”

47. “The reflection of the world is blues, that’s where that part of the music is at. Then you got this other kind of music that’s tryin’ to come around.”

48. “I know I can’t sing; I’m primarily a guitarist. Some people think I’m good, and that’s what I want to find out. I’ve been working with myself and my ideas for 21 years. Now I want to find out from everyone else if they are any good.”

49. “Rock is so much fun. That’s what it’s all about—filling up the chest cavities and empty kneecaps and elbows.”

51. “The story of life is quicker than the blink of an eye, the story of love is hello, goodbye.

I was trying to do too many things at the same time, which is my nature. But I was enjoying it, and I still do enjoy it.”

54. “Who are you to judge the life I live I know I’m not perfect, and I don’t live to be, but before you start pointing fingers make sure your hands are clean.”

56. “I will be dead in five years’ time, but while I am here, I will travel many highways and I will, of necessity, die at a time when my message of love, peace, and freedom can be shared with people all over the world.”

57. “People still mourn when people die. That’s self-sympathy. All human beings are selfish to a certain extent, and that’s why people get so sad when someone dies. They haven’t finished using him.”

58. “It’s funny how most people love the dead, once you’re dead, you’re made for life.”

63. “To Hell with Heaven, to Heaven with Hell. Unless you send me somebody to love…the truth of you both I’m gonna tell.”

64. “From the middle of a tomb whose lights burn only for survival…our tired bodies finally understand and obey our beating hearts.”

65. “Success, to me, is like doing your utmost, achieving the ultimate. Well, I have not done that. I think I shall always be looking for success.”

68. “You have to give people something to dream on.”

69. “I have only one burning desire. Let me stand next to your fire.”

73. “When things get too heavy, just call me helium, the lightest known gas to man.”

74. “To be with the others, you have to have your hair short and wear ties. So we’re trying to make a third world happen, you know what I mean?”

75. “It’s time for a new National Anthem. America is divided into two definite divisions. The easy thing to cop out with is sayin’ black and white. You can see a black person. But now to get down to the nitty-gritty, it’s getting’ to be old and young – not the age, but the way of thinking. Old and new, actually… because there’s so many even older people that took half their lives to reach a certain point that little kids understand now.”

76. “There really are other people in the solar system, you know, and they have the same feelings too.”

77. “I don’t consider myself to be the best, and I don’t like compliments… they distract me.”

78. “I’m goin’ way down south, way down where I can be free. Ain’t no one gonna find me, ain’t no hangman gonna. He ain’t gonna put a rope around me, you better believe it right now, I gotta go now.”

80. “I want to know about the new Mother Earth. I want to hear and see everything.”

81. “I say find yourself first and then your talent. Work hard in your mind for it to come alive.”

82. “Businessmen, they drink my wine, plowmen dig my earth. None will level on the line. Nobody offered his word.”

84. “I used to live in a room full of mirrors; all I could see was me. I take my spirit and I crash my mirrors, now the whole world is here for me to see.”

85. “We want our sound to go into the soul of the audience, and see if it can awaken some little thing in their minds… ‘Cause there are so many sleeping, people.”

86. “The one thing I really hate is miming. It’s so phoney. So far, the only thing I was asked to mime was a Radio London appearance and I felt guilty just standing there holding a guitar. If you want to scream and holler at a record, you can do that at home. I’m strictly a live performer.”

87. “One day I want to become a parent. Now that is what the world is all about. Having kids. Like planting flowers.”

88. “White-collar conservative flashin down the street, pointing that plastic finger at me, they all assume my kind will drop and die, but I’m gonna wave my freak flag high.”

90. “Pretty soon I believe people will have to rely on music to get some kind of peace of mind, or satisfaction, or direction, actually. More so than politics, the big ego scene. You know it’s an art of words… Meaning nothing.”

92. “I’m here to communicate. That’s my reason for being around; it’s what it’s all about.”

94. “If I didn’t smoke, I’d be fat as a pig. My nerves are very bad. I like tipped cigarettes mostly, alternating with menthol ones – about a pack over a day and a half.”

95. “I just called my dad once when I came to England to let him know I’d reached something. He asked me who I had robbed to get the money to go to England.”

96. “Actually, I’m scared to go home. My father is a very strict man. He would straight away grab hold of me, tear my clothes off and cut my hair!”

97. “I like to watch the lightning. Especially in the fields and flowers when I’m on my own. I read a lot of science fiction.”

99. “Look up at some of those airplanes risin’ and takin’ to see the ones that are flyin’ too low yeah.”

Were You Inspired by Jimi Hendrix Dedication for Music?

Jimi Hendrix was regarded as one of the most creative and influential musicians of the 20th century. He died at the age of 27, but his music remains popular today and continues to inspire many aspiring musicians. Despite having a short career, he left a beautiful view of what life is and wonderful music for all of us.

Which of Jimi Hendrix quotes is your favorite? Let us know in the comment section below what are your thoughts and opinions.