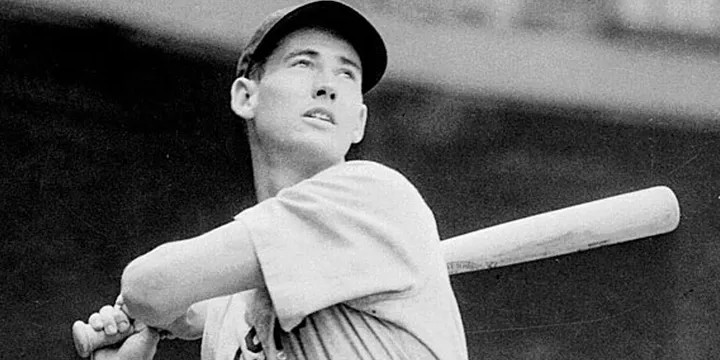 Whether or not you’re a fan of baseball, we’re sure you’ll learn loads of eye-opening wisdom from these Ted Williams quotes.

Ted Williams was an American baseball player and former Marine who served during World War II and the Korean war. Aside from his many accomplishments in the army, he also gained a lot of outstanding awards and recognitions when he played for the Boston Red Sox.

Williams lived a life filled with adventure and thrill, and we’re sure there are more than a couple of valuable insights and lessons you’ll be able to get through this collection.

So, what are you waiting for? Make sure you read through the entire list below!

3.  “Just keep going. Everybody gets better if they keep at it.”

4. “If you get fooled by a pitch with less than two strikes, take it.”

5. “Think. Don’t just swing. Think about the pitcher, what he threw you last time up, his best pitch, who’s up next. Think.”

6. “All I want out of life is that when I walk down the street, folks will say, ‘There goes the greatest hitter who ever lived.’”

8. “The hardest thing to do in baseball is to hit a round baseball with a round bat, squarely.”

9. “All managers are losers, they are the most expendable pieces of furniture on the face of the Earth.”

11. “The only thing dumber than a pitcher is two pitchers.”

12. “Hitting is the most important part of the game. It is where the big money is, where much of the status is, and the fan interest.”

13. “Pour water on a sportswriter—instant horseshit.”

Ted Williams Quotes to Push You to Practice and Work Hard

15. “The key to hitting is just plain working at it. Work—that’s the real secret.”

16. “I’ve found in life the more you practice, the better you get. If you want something enough and work hard to get it, your chances of success are greater.”

17. “No one has come up with a substitute for hard work.”

18. “Look, kid, don’t ever—ya’ understand me—don’t ever let anyone monkey with your swing.”

19. “Gee, I wish I could play here just one season just to see what I could do.”

Wise Ted Williams Quotes That Will Teach You About Life

22. “People want to do what they can. Some give us supplies to bring down, some give money or time.”

23. “I think, without question, the hardest single thing to do in sport is to hit a baseball.”

26. “All the bullets and all the bombs that explode all over the world won’t leave the impact, when all is said and done, of a dollar bill dropped in the Jimmy Fund pot by a warm heart and a willing hand. You should be proud and happy to know that your contribution will someday help some kid to a better life.”

28. “Kids get separated from their parents all the time. Had his parents paid attention, this little child would not have wandered off.”

29. “Why do they cheer me for hitting a homer and then boo me for grounding out the next time up. I’m still the same guy, ain’t I? They can all go to hell. I’ll never tip my cap to them.”

34. “There’s only one way to become a hitter. Go up to the plate and get mad. Get mad at yourself and mad at the pitcher.”

35. “No one can ever see the ball hit the bat because it’s physically impossible to focus your eyes that way. However, when I hit the ball especially hard, I could smell the leather start to burn as it struck the wooden bat.”

36. “A .300 hitter—that rarest of breeds these days—goes through life with the certainty that he will fail at his job 7 out of 10 times.”

37. “Baseball gives every American boy a chance to excel—not just to be as good as someone else, but to be better than someone else. This is the nature of man and the name of the game.”

38. “Batting coaches are just as important as pitching coaches.”

39. “Baseball is the only field of endeavor where a man can succeed 3 times out of 10 and be considered a good performer.”

40. “Baseball’s future? Bigger and bigger, better and better! No question about it, it’s the greatest game there is!”

41. “I’d like to break every hitting record in the books.”

45. “It was always fun for me, I loved baseball so darn much. By the hours I practiced, you’d have to say I was working a lot of hours, but it was pretty near tireless fun for me. I’d rather swing a bat than do anything else in the world.”

46. “Joe DiMaggio was the greatest all-around player I ever saw. His career can not be summed up in numbers and awards. It might sound corny, but he had a profound and lasting impact on the country.”

47. “I knew what was going on at that plate. It used to kill me to strike out, but when I struck out, I knew what it was that got me and what I was going to try to do about it.”

49. “They invented the All-Star game for Willie Mays.”

50. “It’s a funny thing, but, as years go by, I think you appreciate more and more what a great thing it was to be a United States Marine. People will tell me what a shame it was I had to go back into the service a second time, but I’m kinda glad I did. Besides, I am a U.S. Marine and I’ll be one till I die.”

What Are the Greatest Lessons You’ve Learned From Ted Williams?

Even years after his death, Ted Williams is still considered the greatest hitter of all time. Imagine how proud and happy he’d be, since one of his most famous lines includes, “All I want out of life is that when I walk down the street, folks will say, ‘There goes the greatest hitter who ever lived.’”

Well, there’s no doubt that he was and still is. However, aside from being one of the best players in the field, Ted Williams was also known for advocating for hard work, perseverance, and “practice, practice, practice.” He believed that nothing good will ever come your way if you don’t work for it yourself.

He trained hard, and he enjoyed developing and improving his skills, which was one of the main reasons he was successful in his career. So, just like Ted Williams, always remember that nothing good will ever come easy. You always need to work toward your goals as actively as you can.

What did you learn from today’s collection? Are there any other quotes from Ted Williams you’d like us to add? Share your thoughts below!